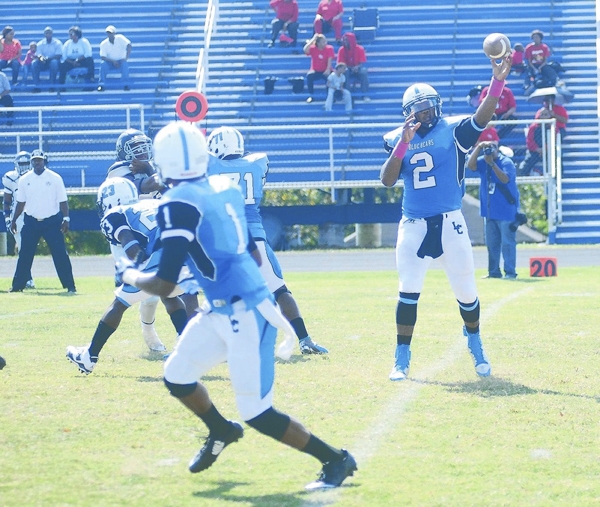 Adam Houston/Salisbury Post file photo Powell (2) and Hendricks (1) team up against St. Augustine’s on a short pass during the Blue Bears’ 2014 homecoming game.

SALISBURY — Preseason All-American Jalen Hendricks starred as a quarterback and defensive back at Nash Central High School, but he was in for a surprise when he first reported to Livingstone College’s football squad.

“Drew Powell was recruited to be our quarterback, and I remember we had a meeting and they handed me a receiver’s notebook,” Hendricks said. “I was shocked.”
The position switch for Hendricks turned out to be a prudent decision and was motivated by Livingstone’s desire to get its best 11 offensive players on the field. Hendricks’ experience as a pass-catcher was limited to his sophomore year at Nash Central, but he’s always bought in to whatever coaches ask him to do.
After two college seasons spent as a third option and a decoy, Hendricks exploded onto the national scene in NCAA Division II as a junior. Opening day found Livingstone’s Blue Bears in an unlikely venue — Millersville, Pa. — and Hendricks remembers his breakout performance.
“I think I had two catches at halftime,” Hendricks said. “But in the second half, I was getting open and Drew was finding me.”
That’s understating what happened. Hendricks had 14 catches for 211 yards and five touchdowns. Livingstone won, 45-44.
Not surprisingly, Hendricks became Powell’s go-to receiver.
“Jalen is a great receiver,” said Livingstone free safety Billy Moore, who sees plenty of Hendricks in practice. “He’s fundamentally sound and he’s very disciplined. He has great ball skills and he’s capable of making great catches even with tight coverage.”
Double coverage became the norm for Hendricks, especially in CIAA games, but he still topped 100 receiving yards four times in Livingstone’s next five contests after the madness in Millersville.
“I saw triple coverage in one game,” the 6-foot-2, 205-pound Hendricks said.
Livingstone countered by using Hendricks in the return game to get more touches. He raced 81 yards with a kickoff against St. Augustine’s. He returned a punt for a touchdown against Bowie State.
On Oct. 18, when Livingstone edged Shaw, 21-20, at Alumni Stadium, Hendricks posted career highs with 15 catches and 212 receiving yards.
Livingstone was 5-2 after edging Shaw, but the following week at Winston-Salem State, the Blue Bears lost a physical ballgame (34-17), and they lost Hendricks with a fractured finger.
They finished 5-5, closing with road loses to Fayetteville State and rival Johnson C. Smith.
“It was tough not being able to help,” Hendricks said.
Hendricks’ hometown is Nashville, although it’s the Nashville (population: 15,000) near Rocky Mount, not the Nashville famous for Vanderbilt, the Tennessee Titans and country music.
“When I say Nashville, people think Tennessee,” Hendricks said. “It’s a mistake that happens. One year our media guide said I was from Tennessee.”
Hendricks was a fantastic high school athlete, excelling at shooting guard in basketball, center fielder in baseball and quarterback and defensive back in football for the Nash Central Bulldogs. When the punter got hurt, Hendricks punted.
As a senior, Hendricks led Nash Central to an upset victory against Todd Gurley’s Tarboro team. Gurley went on to star at Georgia and is now a St. Louis Ram. Hendricks threw two touchdown passes that night and also scored a touchdown on defense.
As a senior, Hendricks accounted for 1,800 yards and 21 offensive touchdowns and scored four times on defense. He was the Rocky Mount Telegram’s Defensive Player of the Year for an area that includes Nash and Edgecombe counties. If not for Gurley, he may have been Offensive Player of the Year as well.
Still, recruiting interest wasn’t overwhelming.
“East Carolina wanted me as a preferred walk-on,” Hendricks said. “Livingstone came in late. Livingstone and Fayetteville State were the scholarship offers I had.”
The final numbers for Hendricks’ junior season were 71 catches for 1,070 yards and 12 touchdowns. He accomplished those eye-popping numbers in eight games.
Hendricks got a nice surprise following the season. It was a call from head coach Daryl Williams, informing him he’d been named CIAA Offensive Player of the Year.
“That stunned me,” Hendricks said. “Especially with me being hurt the last two games.”
No one except Hendricks was amazed.
Hendricks’ finger has healed. Now he’ll be counted on, along with the talented Powell, to help lead the Blue Bears to a winning season as a senior.
“Jalen is ready to go and he’s one of those guys who is all-in, all the time,” Williams said. “He’s a blessing to be around. He’s as good off the field and he is on the field and he has a 3.5 GPA.”
Williams would love for Hendricks to become a vocal leader as a senior, although that’s not his personality. He’s reserved and soft-spoken, and while he’s an All-American, he’s as humble as a second-string lineman.
“I do want to be more open as a senior,” Hendricks said. “It’s going to be a good season. We have a lot of guys with experience. We have a lot of guys dedicated to this program.”