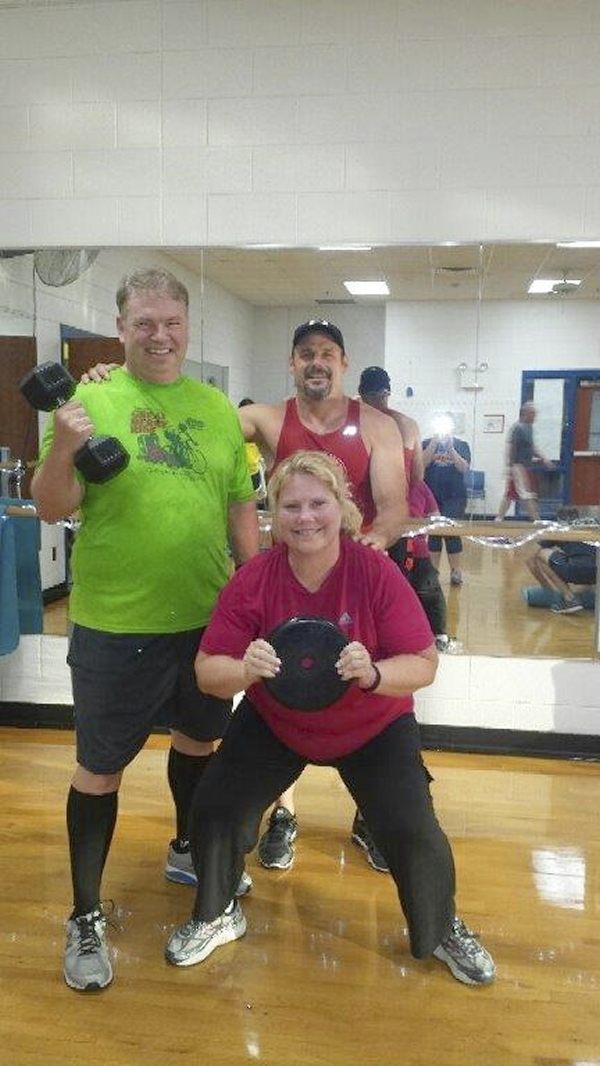 Brent Parks and Norma Honeycutt, shown here with Mike Mangum at the Y, started their fitness challenge in January. To date, he has lost 35 pounds, she has lost 38, and both are much more active than before.

While my bike ride was taking place, I took Brent and Norma’s goals and asked them to do some certain things. Among the things that I hoped they would do is work out together for a minimum of twice a week.

I also encouraged Brent to get a Fitbit or some other type of tracking watch and for him to start utilizing it to enhance his workouts. Last thing, I wanted both of them to step up the intensity of their workouts and keep me posted on the specifics. They can’t stay at the same level of exercise and expect continuing significant results.

Specifically for July, Norma wanted to work out every day and focus on variety. She planned to continue to monitor her caloric intake and keep doing 10,000 steps a day. Brent’s July goals were to regularly take the early spin classes, usually twice a week. He wanted to do long bike rides on weekends. Brent’s minimum number of workouts per week would be five. Finally, he wanted to explore possibilities for lunch time classes.

Here is what happened. Norma has become a workout fanatic, now doing step classes, circuits, swimming, water aerobics and boot camp. She is encouraging those around her to become involved and often takes them with her to the classes or other workouts. Norma seldom missed a day during the month, in fact she told me this morning that she could only remember taking one day off completely. She sent Brent and me regular recaps of her workouts, often with a copy of the Fitbit stats.

Brent got the Fitbit at the end of July and started using it immediately. He focuses on his heart rate but does not monitor calories or steps. Brent had 15,000 steps on a hike at Hanging Rock for his best effort. He took a cycling class and then walked nine holes of golf one Sunday. He took the boot camp class taught by Mike Mangum at the Hurley Y when Norma encouraged him. Brent averaged four workouts per week, but didn’t always post to Norma and me. Brent did some cycling on the Virginia Creeper trail and also kayaking on the New River.

The results achieved were as follows, for the month of July and totaled after seven months of the one year program: Norma has lost an additional 7.6 pounds for a total weight loss of 38 pounds. Brent has lost 35 pounds, including 5 during the past month.

Norma had two significant goals achieved during July. One is that her Body Mass Index (BMI) is no longer rated as morbidly obese. The other is that she can now shop in the regular women’s department at Belk’s. Both of these were near the top of her original list of goals that she set when we first set out to improve her health.

Best yet, Norma says, “I have incorporated exercise into everything I do, even vacation.” She leads several workout buddies from Partners in Learning in workouts.

Brent and Norma only worked out once together, when she invited him to do boot camp. Brent and his business partner have ordered some fitness machines and weights for their office building.

Now we go forward into the last five months of the year. Norma has gained an edge in workout intensity and overall weight loss. She has done this by having a proper mix of wellness initiatives. These include the caloric intake, regular and higher intensity workouts mixed with variety while focusing on cardiovascular fitness.

Brent started off with a faster weight loss in the beginning, but has slowed some in the last two months. Quantity and quality of workouts, including the length of them, are the key to catching back up with Norma. Brent should work out five to six times a week, with at least three of them keeping the heart rate above 150 for half the workout. The heart is the most important muscle in our bodies and overall fitness follows along with high quality cardiovascular workouts.

Brent has an interest in weight lifting, which will help with his core strength and balance, a perfect complement but not intended to replace cardio workouts. Also, there is nothing wrong with two workouts in the same day if they don’t focus on the same muscle groups. Monitoring caloric intake would greatly enhance his overall fitness program.

With all that said, both are hoping for a minimum of 5 pounds more lost in August. We will all meet together more often, a good motivating factor. I will report on the results again at the end of August. As before, if you see Brent and Norma, encourage them to keep rolling.

I hope to see everyone who can make it come out to the China Grove Roller Mill on Sunday afternoon to celebrate my recent Alabama to Canada bike ride. We have some special things planned. As I said earlier, this will be my chance to thank the readers and show my appreciation for all the support during the last 36 days and 2302 miles of riding. Plus, it will be a great time to talk about the possibilities for the next ride. Thanks again for riding along!