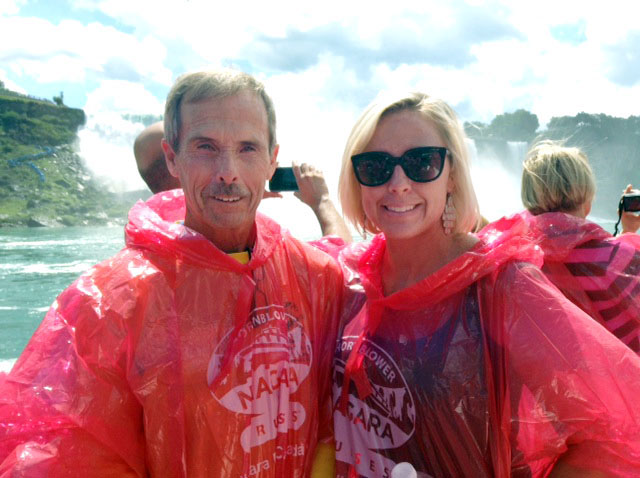 David Freeze and his daughter, Amber, went on the boat up to Niagara Falls, and they both got designer ponchos for $40. The ride was free.

Editor’s note: Salisbury native David Freeze cycled from Mobile, Alabama to Toronto, Ontario, Canada. The Post chronicled each day of his ride. Contact him at david.freeze@ctc.net.

With no bicycle ride today, I had plenty of time to reflect on my cycling ride from Mobile, Alabama, to Toronto, Canada, by way of Owen Sound.

But first, I want make a correction about one of the people that I met yesterday. I mentioned that Andrew at the Delta Hotel was really excited about my bike ride and the fact that I had arrived after such a long journey. It turns out that Andrew was wearing someone else’s name tag and that his real name is Dayvon, who just happened to finish in fourth place in the Pan Am games in badminton while representing Jamaica. Dayvon told me all of this before we headed out to Niagara Falls today. He has a significant chance to participate in the upcoming Olympics.

Part of my reason for telling this story today is that it is just an example of how the trip was full of discovery. In this case, discovery included lots of new things and more information on topics that I knew a little about.

There was new words often, like frings, dew worms, and pram (a baby carriage). I saw alligator meat for sale for the first time. Certainly I can never forget that the Canadians all love the fact that they live on or near an escarpment. What that word means to me is hills, and though it has a definition that states a level place on both sides, I struggled to find that place.

Often, I spent time riding towards some of my favorite things like lighthouses and Revolutionary and Civil War battlefields. This time, some of those battlefields were in Canada and now I have a much better understanding of the War of 1812. There were plenty of old churches and historic houses, many of them associated with the Underground Railroad Route.

The beautiful farms of the Amish and the Mennonites, who nearly always waved at me, were surprises. Their farms were in states and Canada where we don’t hear about them often. It is still amazing that occasional droppings of manure in the roads from their horses make me even more comfortable on the bike.

The up close look at an operating steamboat was fantastic as was the luck that allowed me to be there just as it was preparing to leave its dock. All the old bridges along the way help me now understand their operations better.

The cities and towns seemed to all have monuments to their veterans, true from south to north. Many times the wars and even specific battlefields were listed as communities took great pride in remembering the sacrifice of those men and women.

Odd things stood out as well, most that I haven’t mentioned in the newspaper yet. There was a tree that had a dozen or more bikes hanging like ornaments and there was a police car parked at the edge of a town that served only to slow speeders unless they took a closer look. I doubt whether the car had been moved in a month, but I will admit to riding toward the car to ask directions. The heart shaped jacuzzi in my motel room can’t be forgotten, but who would want to.

The special places along the route, not always towns, made for some good fun and learning too. Rabbit Hash, Land Between the Lakes and so many more. I made so many pictures of windmills, both old and modern, that I probably could have finished a day earlier without stopping so often.

Weather was not much of a factor, though I was out in two tornado watches, the only two times that I have heard my phone set off that alarm. There was plenty of early rain, but no brutal heat at all. Some flooding occurred around me but never caused a delay unless I just rode over to see it.

Often my reports include the quality of the roads, presence of rumble strips and bike lanes, and friendliness of the drivers. Thinking back, I probably only got about ten angry horns the whole trip and five times I got toots and and waves, even from truck drivers. Maybe I followed the rules a little better this time, but I just prefer to think that people were exceptionally nice.

My visit to Elvis’ birthplace was a highlight and I even considered going to Graceland. The University of Alabama was fantastic, too. And a sighting yesterday of controversial former Toronto mayor Rob Ford just added to the fun.

Hills, motels, campgrounds and my phone issues took up a lot of my thought time, but nothing was too extreme. I worried about not having a workable phone in Canada, but it was really no different than crossing the Rockies. Not a big deal.

As I always say, people make these long rides worthwhile. I can’t begin to mention them all, but Darryl Voncise helping me find a motel that late Sunday afternoon and then bringing a bag of groceries was so special. But then again, how about Amy and Jonathan Turner from Rockwell finding me in Collingwood, Ontario, and spending the next morning with me? Nancy and Ed Zantinge gave me great information and were great hosts in Owen Sound. And then there was Andrew Ross, giving me a place to stay one night and then arranging to come and pick up my bike to ship it home. My daughter Amber helped me start the ride and and joined me to finish it. People are still so good in America and now Canada too!

With this final reflection on the ride, I can’t help but remember my sponsors. The Salisbury Post ran my daily updates, along with Fowler Physical Therapy, Partners in Learning, Gear for Races, Vac and Dash and Skinny Wheels Bike Shop.

My bike and other equipment did great once again, and I carried even less stuff than on the previous rides. My body seems fine, no issues that I know of.

When I first thought about this ride, I wanted to ride from south to north near the middle of the country and possibly into Canada, too. The Underground Railroad Route fit the bill perfectly and fueled my interest in history. The ride started at a slave market in Mobile and ended at the most northern point of the URR at Owen Sound, where I got to participate in this year’s Emancipation Celebration. The struggle of those slaves who sought freedom was remarkable and amazing, especially considering the full fledged coordinated effort that finally fulfilled that goal for so many.

Throughout this ride, I found again that it is so simple to look past racism in our daily interactions and long term as well. Everyone deserves to be free and it is my hope that the much bigger right of equality will continue its upward drive. Let’s all strive to do our own part to make this happen. We will all benefit.

Now with all this said, the ride has come to an end and so has my reporting on it. Your communications and prayers absolutely helped give me the strength to keep pedaling and kept me safe while doing it. I hope you will all join us at the China Grove Roller Mill on Sunday afternoon and give me a chance to express my appreciation to you. And just maybe we can all start thinking about the next ride.