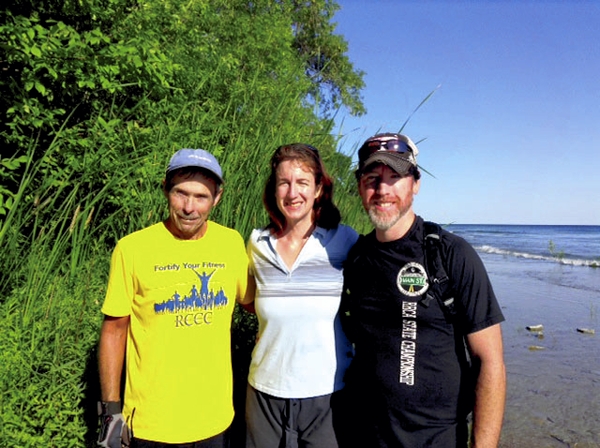 Friends from home, Amy and Jonathan Turner, were in the Collingwood area. I rode with them some this morning and we had a great time talking, still amazed that they would be vacationing so close to my trip route.

David Freeze: A big surprise and a terrible headwind

As I mentioned last night, I wanted to get a shot of the sunset in the Collingwood harbor. I rode all around, trying to find the best vantage point. Just before sunset, I decided to watch from a little park out past the marina. The sunset was beautiful again but this time we couldn’t see it go down in the water because of a small strip of land was in the way.

However, I got the surprise of the trip when Amy Boger Turner texted me that they were camping nearby and they knew exactly where I was because of the newspaper stories. Amy and I used to work together at the YMCA and she now works at RCCC where I have taught some classes. She and husband, Jonathan, are big outdoor enthusiasts and have friends in this part of Canada. Texts on my phone still work thankfully.

I rode with Amy and Jonathan on the Georgian Trail this morning. The Georgian Trail is an old railroad bed that was converted for cycling, running and walking and is very popular. It is hard packed small gravel and very easy riding with any bike. We rode along the Georgian Bay, a portion of Lake Huron, then cycled to Thornbury and then on to Meaford. After stopping in at Grandma Lambe’s for some fresh raspberries and other tasty baked treats and being taken care of very well by Darlene and Abby, Amy and Jonathan then headed back to their campsite and I headed toward Owen Sound. My tent, sleeping bag and air mattress will ride back to NC with Amy and Jonathan and I thank them for offering to lighten my load.
Since the wind was so strong yesterday, I didn’t expect a repeat today. I knew that I would be riding west toward Owen Sound, and even by daybreak the breeze was building. Al Mills cycled into the Meaford Marina parking lot and sat down at a picnic table at just the time that I needed an expert to help with the best route over the mountains. I told him where I needed to go and Al drew out the best way which just happened to be the route that he had just finished.
I set out to climb as I left the water but what hit me almost immediately was the shear force of the headwind. The wind was strong and constantly in my face and ears while adding to the challenge of the climbing. Cycling is way less fun under these conditions. Most of this ride was on CR 12, 112 and Sideroad 10. The happiest point was when I could see a right turn coming on Route 6. I was finally close to Owen Sound and turning to put the wind on my side.
On the way into town, I saw Dennis Ridout pedaling toward me and stopped him to ask some questions. Dennis was kind enough to answer them and even ride with me for a bit to make sure I was on the right track. I hope to see Dennis again tomorrow at the celebration.
I am spending the night with Nancy and Ed Zantinge just north of Owen Sound. Tomorrow, We will head to Harrison Park for some of the many activities that will take place throughout the day. It is great to have reached the northernmost point of the Underground Railroad and then be here for the celebration of such long standing goodwill.
My plan for tomorrow is up in the air at this point and will be finalized later tonight. I will be back with you, either here from Owen Sound or partway to Toronto. It will be an exciting day regardless. See you all tomorrow.

By Mark Wineka mark.wineka@salisburypost.com SALISBURY — Stephen Pocklington said his heritage is what he starts making today and that he creates... read more