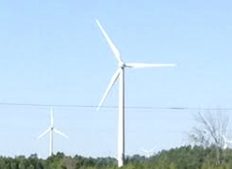 Freeze saw hundreds of these windmills Thursday morning, and the wind had them going strong. Most were close to Dundalk and Maxwell at the highest elevation. David Freeze/For the Salisbury Post

After another great night’s sleep at the Orangeville Inn, I knew there was climbing to do this morning and then some good downhill this afternoon. What I didn’t know is how many new words I would learn today.

First, I went down to Wendy’s, hoping it was open for breakfast. It was not, but there is a chain of restaurants in Canada called Tim Horton’s that everyone is crazy about. So I went there. Two egg and cheese muffins and two cookies were just slightly higher than McDonald’s but she parceled out the ice like there might not be enough to make it through the day. They hand you the ice from behind the counter and never is the cup near full.

On the road, it was just slightly cool again, and a gentle breeze was blowing. I headed north, which is really more east on SR 10. I was told yesterday that I would be climbing quite a bit to get over the Niagara Escarpment. The climb was gradual but consistent, and as the traffic started picking up, I worried that maybe I should find another road. The minimal shoulders were often broken up, and I had to ride in the traffic lane. I decided to follow SR 10 through Shelburne, where some of the traffic turned off on other roads. Lucky for me, two of the lanes had been stripped of asphalt and were waiting for paving. I rode in those and got along just fine. My first new word of the day happened here. I saw a sign that said, “We have dew worms.” I looked that up later and found that dew worms are a type of earthworm that is active at night and after heavy dews and rains.

Out of Shelburne, I stayed on 10 towards Dundalk, where I would leave it for sure and rejoin the Adventure Cycling map. About this time, I met the fiercest headwind of the whole trip and I saw why right away. Hundreds of giant windmills had been put up in this higher elevation to take advantage of the open spaces. With nothing much to stop the force of the wind, I found this the toughest part of the day. It sure was fun seeing all those windmills, though. A crew was working on one of them, and the size of the structure was amazing compared to the men and the vehicles.

I stopped at a convenience store in Dundalk. No peanut butter crackers in sight and Reese’s Cups were four for $3.49. I bought the cheapest candy bar I could find and got tea for caffeine. No ice, either.

Back on the road, I made a right turn and had the wind to my side, which is much better. I began to see manure in the road and thought that I might again be in Amish country. The shoulders of the roads are just about all gravel in this area, and I soon saw several buggies that looked more like little wagons than carriages riding on them. My map said that Maxwell was the only chance for food until I got to the end of my ride, so I stopped at Gilbert’s Country Cafe, the only store open in town. They serve breakfast all day, and I ordered two egg, cheese and tomato sandwiches.

Here is where things started getting interesting. I asked for an ice water and the clerk handed me a plastic glass and said, “You will have to give this back.” She then poured me a glass full of water and no ice. While this happened, I noticed that the menu had pea meal and frings as two unusual items. I asked the clerk and she told me that pea meal is “just the best part of the pig. You will have to get some before you leave the area. They don’t have it in the states.” By that time, John Bunn had pulled in to order from the take out window. John eventually ordered frings, which were defined as a mixture of French fries and onion rings. He also told me that the farmers were Mennonite, not Amish, and in fact there is a large community of them in the area.

I looked up pea meal, and it is defined as the lesser known brother of Canadian bacon and has something to do with tenderloin. By the way, those two egg sandwiches were huge and were the best of my whole trip.

After that, I had more gentle climbing and then some good downhill as I followed rural roads that are called concessions and side roads. They are numbered and easy to follow. My destination for the day was Collingwood, Ontario, and I made it just after 3 p.m. this afternoon. I found my motel, a view of the water and a grocery store all very close by. So I went out and rode around town a little, but the wind was still pounding pretty hard. Collingwood was famous for shipbuilding for many years, starting in the 1880s and continuing through World War ll. It is located on the Georgian Bay. Large grain silos are still here and were last used in 1986, ending another of the main businesses of the area, I am looking forward to capturing another sunset over the water this evening.

John Bunn told me another fact about Collingwood. The city hosts one of the biggest Elvis festivals in the world, and this year’s version was just last weekend. John said that Lisa Marie, Elvis Presley’s daughter, has attended in the past. I have already seen some of the advertising that is still in place. Talk about being a day late; I would love to have been here.

Time is starting to grow short on the adventure, with just a few days remaining. I will go to Owen Sound tomorrow and be there for the Emancipation Celebration on Saturday. You can see more information on this at www.emancipation.ca/the-festival. I will send a recap on Saturday’s activities. It is certainly a worthy official ending to my Underground Railroad ride with this being the longest running celebration of the freedom that blacks found in this most northerly part of the Underground Railroad.

Then comes the big challenge of pedaling back to Toronto, mostly on Sunday, but arriving on Monday morning if everything works out as I hope it will. With 62 miles today, I will head out soon for that sunset. It has been another great day! I look forward to another one tomorrow. I will see you then!

‘Let’s start a new heritage’: Forum aims to be…