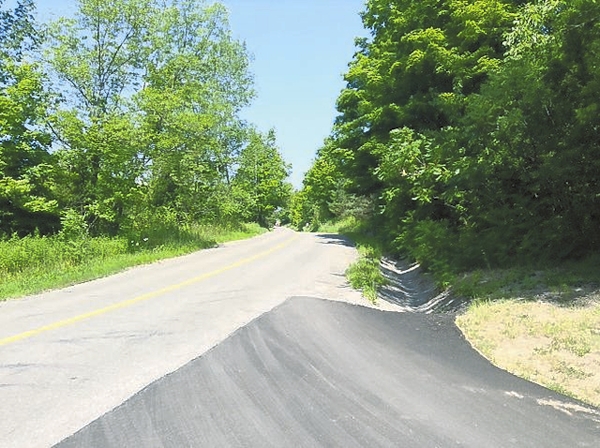 David Freeze/For the Salisbury Post Freeze’s climbing went on for most of the morning on Wednesday. There were short and very steep climbs where Freeze thought that he might slide off the back of the seat.

This morning, I didn’t get as excited as I usually am about going out and getting started on the day’s ride. I was supposed to ride through some of the steepest hills of the whole trip and it looked like they would start quite soon. After backtracking to downtown Georgetown on Highway 7, I took time to stop by McDonald’s, something that I don’t usually do first thing in the morning. This time, I got a surprise. McDonald’s has their own bagels fresh made and you can get an egg and cheese one with tomato and lettuce. I had mine on whole wheat and it was fantastic!
After that little jump start, I battled the dump trucks for a bit as I left town. Pretty soon, they turned right and I turned left. I was amazed to pass a very large nursery named Sheridan Nurseries, the winner of the top grower internationally for 2012 and 2013. It was interesting to ride through the area, especially since I have spent most of my life in some version of horticulture.
Then, I headed toward Terra Cotta, an unusual little town that had an alpine feel. Terra Cotta has a very large restaurant, a country store only open on weekends and some great looking homes. They also have a big time bike race coming up this Monday over an extremely challenging course. My map had me riding a good portion of it, and from that experience there is no doubt that I won’t make it as a good bike racer. A moderate climb got me up on King Street, a wonderful ride along a ridge through farming operations.
Inglewood was the next town, and I got the chance to coast down a very big hill while entering Main Street. I almost hate the long downhills in an area like this because it means a long and brutal uphill is coming next. In this case, I was climbing higher all day and therefore the climbing would be longer in distance than the downhill. I passed a general store that said it was closed and nobody seemed to be at the nice bike shop either. Lots of houses, but little else in stores were available.
The big uphill came on the other side of town and had a one mile long portion of packed gravel. Then the climbing began in earnest as I turned on Forks of the Credit Road. The Credit River is a beautiful mountain type river and lots of fly fisherman were out on this nice day as I struggled by. A few Rocky Mountain climbs, not long but very steep, were the hardest of the day. One had me passing a ski slope/ country club combined.
Finally having completed the steepest of the climbs, I sped up a little bit while heading toward Alton. Everybody I met talked about the incredible heat of the day, the hottest of this summer in the area. Not able to convert Celsius without checking google, I found that today was about 33 Celsius and 91 Fahrenheit, pretty good for a North Carolinian. You should hear the media pumping the scorching and extreme heat at every opportunity. One station even said to bring your pets in at night because the nights would not cool off much below 70 Fahrenheit.
I passed through Alton and started riding uphill again, but much more gently this time, topping out at about 1500 feet for the day as I pulled into Orangeville. It is another town about the size of Salisbury. While riding through the edge of town, I spotted Gavin Sample. He got a co-worker to come tell me some things about the area, including the motel options. Gavin and I talked about the heat and how much snow they get in winter. He said they get so much snow that eventually the street department has to come load it up and haul it away. Of course, I told him that this heat was a normal day at home.
Another stop at McDonald’s to check messages resulted in the discovery of a nice fireplace inside. A couple more things about McDonald’s in Canada are pretty cool. Their prices are very reasonable and they don’t mind giving me free ice and plenty of it. Nobody else seems to have any. There is a convenience store chain up here called “On the Run” that is also in the US in certain areas. None of the stores here have ice at all.
After checking in at the motel, I cycled back about a mile to the Island Lake Conservation Area. It is a beautiful lake that has a 5 mile trail around it, all on gravel. I rode it, but struggled some with keeping the bike upright in the loose gravel on the hills. This area needs rain to make the trail more firm.
My feet have already been up with a shorter ride today of 49 miles. Tomorrow, I will head to Collingwood and again get close to Lake Ontario. There is a certain lighthouse I want to see there, and maybe a few other things.
If all continues to go well, I will arrive in Owen Sound on Friday after something close to 2200 miles on the road. I am looking forward to the Emancipation Celebration on Saturday and also seeing more of the area. This will be my northernmost point of the whole ride and also the farthest north I have ever cycled.
I continue to be amazed at how many ideas and good wishes I have received. There is no doubt that my time on the road is made better because of the Post’s readers. Thank you for that and see you tomorrow!