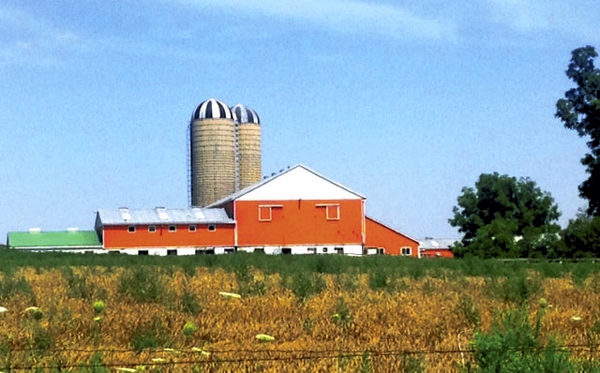 Freeze began to see the biggest barns of the trip this afternoon. He is now in the area where milk cows used to be kept in the barn for long periods during wintertime. It was the same style of barns, though not as big, in Maine last summer.

David Freeze: Some issues but everything worked out just fine

Last night, I went to bed at the City View Motel with a plan. When I got up this morning, at least the early part of that plan went right out the door. My usual routine is to use everything that I need first thing in the morning and then start packing my bags. Usually the tools stay down toward the bottom and don’t come out while in the motel room. On this particular morning, they came out because they had work to do. I had noticed a very slow leak in my back tire for about a week. I just topped it off every couple of days and off I would go. This morning, I happened to check the back tire before I left the motel room and it was flat as can be. My usual response is “nothing to do but fix it,” and that is what I set abut doing.

Today marks the second time that I have changed a tube in the motel room. I think the other was in Kansas during the 100 degree days of the trip. This morning, I listened to The Today Show while doing the work. After packing up again, I rode up a very steep three-mile hill on Snake Road back to Waterdown, first to stop at McDonald’s and try to use an app to fix my phone. It didn’t work. Then on to the local bike shop to let them check out the tire. Jim at Bicycle Works pronounced the tire job OK and topped off the tires before sending me on my way. By now, I was already three hours late, and it got worse. Once in a while, the Adventure Cycling map has an error and I found one this morning. I made a lap back to about where I had already came through, so I got David Moffatt from nearby Hamilton to help. He used his phone and Google Maps to straighten out the issue. I followed his directions  and was finally rolling again.

My first riding today was through farming country. I rode through Kilbride and stopped at the only store in town. It is a convenience/hardware/grocery store, plus a post office and more. Out of snacks, I asked for peanut butter crackers. He had one 8-pack, and said they were not popular in his store. No more Little Debbie stuff in sight. By the way, soft drinks and water here are extremely expensive and nobody has ice in the convenience stores. Bet that ice would have been a big hit today when it got up to about 93 degrees.

Back on the road, I climbed up the escarpment as I neared Milton, a town of about 100,000 people. An escarpment is a steep slope or cliff that results from faulting and separates two relatively level areas of different elevations. I got at least one dramatic picture of it, but mostly it just felt like climbing over an Ozark hill without having to climb another right away.

Milton is a very unusual city. Hundreds of similar houses line the boundary roads. The houses are so close that one person could easily touch two at the same time. New roads and new houses for as far as I could see.

More farming on view next, with some grain being combined and straw baled. Some of the biggest barns that I have seen are in this area. I learned last year in Maine that often dairy herds were kept in the barn for months at a time and I am sure that the same occurred in this area during the winter.

Then, it was on to Georgetown which has a very old section along Main Street and a much newer section a few blocks over. It is called the city of the Halton Hills, of which it has plenty. I met Dick and Betsy Braan, who were sitting on their front porch. Dick says he hates the hot weather, but loves the severe winters in the area. Georgetown has average highs around 20 and lows around 10 in January and February.

I am spending the night about five miles north of Georgetown on PR 7, which might stand for public road. I will find out.

One correction from yesterday is important. Richard and Reverend Kellie’s last name is spelled Browne.

Tomorrow’s plan is to keep working north and spend the night near Orangeville, Ontario. I am still on track to get to Owen Sound on Friday, then head for Toronto on Sunday. But as I found today, plans can change. Fifty miles today with some serious climbing caused me to work hard at hydrating. Some more of the climbing is planned for the next few days. I will be going from about 200 feet in elevation yesterday to nearly 1,800 feet by Friday morning. Tomorrow is also likely to be the hottest day of the summer in this area, topping out somewhere around 94 of our Fahrenheit degrees.

I will check in again tomorrow. Keep riding along!

SALISBURY — Riley Myers was hot and tired Tuesday. The sun was beating down on the players at Newman Park, and... read more