David Freeze: Lots of time on the water and more new friends 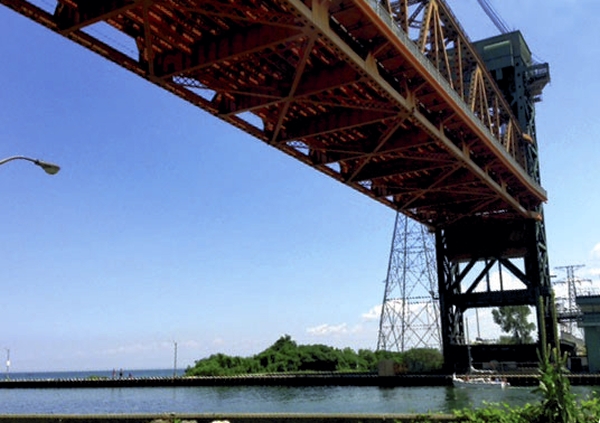 This whole bridge raises when boats go through the Burlington channel to and from Lake Ontario. Freeze rode across it right before it went up in the air again.

After a late night of planning and some more phone issues, I headed north and west from St. Catharines this morning. Not quite as early as I planned, but out by 7:15 a.m. My phone will not call out in Canada; therefore I have had to do several workarounds. The end result of today is a perfect example of why my phone needs to be working, I haven’t given up.

I rode away from St. Catharines feeling especially good. The morning was warm, no jacket needed and the terrain was very moderate. Lots of vineyards and large greenhouse ranges dominated the terrain. I noticed that I was only supposed to get small amounts of time on Lake Ontario before heading inland. With just one small glimpse of the water, I stopped at the Victoria & Greenlane Auto Service Center to get a few snacks. My bags were cleaned out because I had eaten just about everything I had in them already this morning. Also, the temperature is at near record levels for this area and for the first time on my trip, there was essentially no breeze. Only a slight one when I was near the water, so I was thirsty.

More magic happened at this stop when Ashley Richards and Albino DiSanto took a real interest in my trip. Albino is a cyclist and knew a lot about the area, and he devised a wonderful route that would let me spend most of the day along the water. He wrote down specific directions, we chatted about my bike and why I had made certain choices in equipment, and then Ashley and Albino sent me off to a much more inviting ride.

I followed the directions but will admit to turning toward the water a few additional times as I rode through Grimsby toward Hamilton. The biggest highway in the area, the QEW, was running along as an interstate highway does at home. It had service roads on both sides and I crossed over to follow the service road on the Lake Ontario side.

It was easy riding with a bike lane and then eventually the Hamilton Beach Trail, about five miles of a very scenic greenway along the beach. Rollerblading, running, cycling and just walking seemed to be the main activities. I may have to try some rollerblading, just to see if I can do it.

There were a good many informational signs and markers, and I couldn’t pass them by. The trail came to an end at the Hamilton Harbor and there was a huge bridge that appeared to be the only way across. I asked a local what to do, and he showed me that there was a bridge for local traffic, including pedestrians and cyclists, that raised when boats needed to enter or exit the harbor. The whole bridge raised up and then came back down once the boats had passed.

My concern was how to get my bike up to the bridge. Smooth aluminum gutters were in place on each side of the steps, allowing the cyclist to push his or her bike up. This was the hardest that I worked all day because that gutter was steep and there was no room for my bags. Those other people aren’t pushing a heavy bike loaded with 40 plus pounds of stuff, and I will admit to breathing hard once it was done.

Coming down on the other side was no piece of cake either. But finally it was done, and I was in Burlington, a large city of about 175,000 with plans to head to Waterdown.

First I met Andrew Ross who made sure that I had good directions and offered me a place to sleep on the way into Toronto next week. He was out riding today, too.

Next I met Gil Camara and Derek Collins working for the street department. We had a nice talk about weather, Myrtle Beach and a bunch of other things, but they sent me on a slightly more scenic route toward Waterdown.

I headed that way and found that truly the ride was all uphill as I rode about five miles and gained considerable elevation, enough to look back and see Burlington down next to the water.

Finally in Waterdown, I stopped in at the bike shop to check on the motels that I had listed. Here is where a workable phone may have helped. The first has been replaced by condominiums, so they sent me to the second, about three miles away. When I arrived, I found out that they were sold out. The owner sent me to another one called City View, back toward Burlington on Route 6. This portion of Route 6 is not open to bicycles, but I rode it anyway.

Finally, I am back near another view of Burlington, and I will have to climb back through Waterdown again in the morning to continue my journey. Not a big deal, because the climbing can be done and this motel owner gave me a back way to do it. By the way, the severe climbing is part of what is called an escarpment, probably some more of the glaciers at work.

Tonight, I am somewhere between Waterdown and Burlington and in a great room with a fine host. My total for today is 57 miles or 91 kilometers. I really like that kilometers are shorter. I will head toward Georgetown tomorrow while closing in on Owen Sound.

Speaking of Owen Sound and Saturday’s Emancipation Celebration, I have come to know Canadians Richard and the Rev. Kellie Brown from John Calvin Presbyterian Church in Salisbury by email since this journey began. Richard’s sister, Nancy, has given me great guidance throughout and will be my hostess for Friday night and Saturday in Owen Sound.

Canada is absolutely the cleanest place I have seen in all my travels on a bike. There is no roadside trash anywhere. This is quite impressive considering that I have passed through some large cities so far. If we could ship a bunch of New Jerseyians to them for some straightening out, I would be all for it. Also, I am amazed to see so many phone booths, even in the city.

Record heat is in this area, but it is moderate for what we have at home. Also, this area is dry. It was good to hear that my farm got some much-needed rain on Monday.

I am going back up the escarpment tomorrow and looking forward to another good day. I will let you know what happens. See you then!