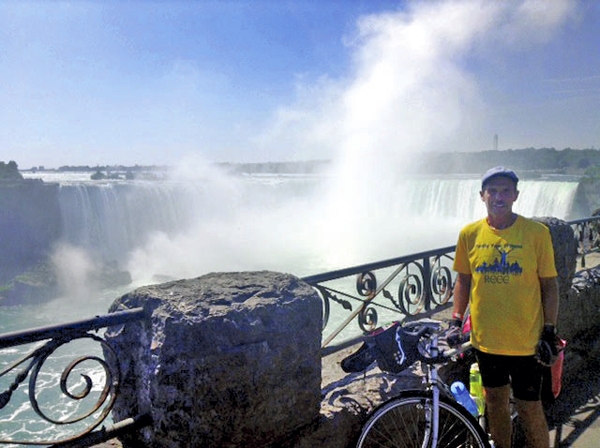 Freeze was amazed at how spectacular Niagara Falls is. He spent a couple hours there Sunday morning,

There is so much to tell about today, I might have to let my iPad rest part way through. I will start with Saturday night. As I said, my only real option was camping. The Riverview Campground was about full, but got quiet in time for me get another great night’s sleep. I crawled in the tent at about 9:30 p.m., ready to avoid the persistent mosquitos. I sat watching the river as dark came, still with lots of boats on the water. It was fun to watch their lights. A few drops of rain fell while my iPad was still charging in the pump house. The WiFi signal was only good near the office, so I checked messages and the Yankees score before heading for my tent. I like sleeping outside. If not too hot or too cold, it is peaceful for me. Last night was perfect, partly because I left the door flap on the side where the breeze could blow into the tent. My new sleeping bag was just right, and the tent was proven from the 2013 cross country trip.

I knew there was no need to hurry Sunday morning when I got up and found everything damp from a heavy dew. Finally, I just packed everything up slightly damp and got ready to hit the road. The lady running the desk stopped me to fill out a Canadian government questionnaire about long-distance cycling. I thanked her for a nice night and off I went toward the falls.

Signs began to say just that: “To the Falls.” I could see an amazing mist from a couple of miles away and the water started going faster. The huge hotels overlooking the falls were incredible themselves. I saw all the buses parking and knew that I was there. The mist was covering everything, and the sun was making the mist white, so that much of the falls were hard to see.

The crowd was unbelievable, even at 9:15 a.m. Most seemed to be speaking foreign languages. This was one of the places that I was told to not leave my bike. Of course, I ignored that rule several times. Nobody bothered it. I met several groups of people, including Laura and Jacob McNabb from Monroe, Mich. We made pictures of each other and a couple with all of us together.

I kept looking for different views and enjoyed being in the middle of all this excitement. Finally, I walked the bike out of the congestion and started riding again, most of the riding on the Niagara Parkway and the Niagara Recreation Trail. Lots of people were using the trails for walking, running and cycling. I kept pedaling toward Niagara on the Lake, a city that I was told not to miss. On the way, I saw lots of small historic sights but most were known more to Canadians. Many had to do with the War of 1812 and were centered on Fort George and Fort Niagara, exchanged several times by the British and the Americans. I also passed a lot more vineyards and plenty of farmer’s markets. People were out everywhere on another perfect day.

Speaking of people, I met Mark and Wendy Alton, tandem cyclists from Venice, Fla. We all came to the end of one bike trail and started talking before getting directions from locals.

In Niagara on the Lake, I saw Fort George up close but did not pay to tour it. Then I saw Fort Niagara, just a short way across the Niagara River on the American side. I would have toured it. Most of Fort Niagara is still original while Fort George has been rebuilt. The view across the river as it emptied into Lake Ontario was another spectacular moment. It was my first view of Lake Ontario and I expected more during the afternoon. Another amazing thing was that I could see the big buildings of Toronto where I will end up next Monday after a northern route to Owen Sound.

Not a single view of Lake Ontario was available for the rest of the afternoon, even though I was on Lakeshore Road. I pedaled on some bad roads that then became pretty good as I neared St. Catharines. I called a few places to check on accomodations, knowing that I desperately needed a shower and to wash out some of my clothes. My last shower had been a brief cold one in Orchard Park, N.Y., two nights ago. I asked a cyclist and two teenagers, none of whom seemed too much in tune to the area. Then I saw Darryl Voncise drive into the grocery store parking lot and something told me to ask him. We had a lot in common immediately, since Darryl is a cyclist, runner and part-time farmer. He is very interested in long-distance cycling. Darryl helped me track down a reasonable place near the next day‘s route. We probably talked for 25 minutes, and I think we both enjoyed every bit of it. He went to the grocery store and I hit the streets.

Just as soon as I got checked in, I saw Darryl pulling up into the parking lot. He hopped  out with watermelon, bananas, and some drinks. He handed me the bag and drove away. That is called “trail magic,” and it is the effort at kindness that never ceases to floor me. Thank you, Darryl!

I am in my room about to finish my daily update and not far from a much needed shower. It was a great day, with lots of sightseeing, some that I mentioned and some that I left out because of space  considerations.

I am just five days from arriving at Owen Sound, Ontario, where I will attend the Emancipation Celebration on Saturday. The celebration has been going on continuously since 1843. Originally, I hoped to make this a part of my overall adventure, and now it appears very doable. Then I will pedal the remaining 100 miles or so back to Toronto to arrive on Aug. 3. More on the local names involved with the Owen Sound celebration tomorrow.

A couple of unusual things before I forget them. Canadians still have phone booths around, and of course their gas is priced by the liter, same as in Britain. Right now, they are paying about $4.50 per gallon here.

With these things said, I will close for tonight after 40 miles and plenty of amazement otherwise. See you tomorrow with some cleaner clothes and hopefully smelling a little better!