David Freeze: Uncertainty clears away as he crosses into Canada 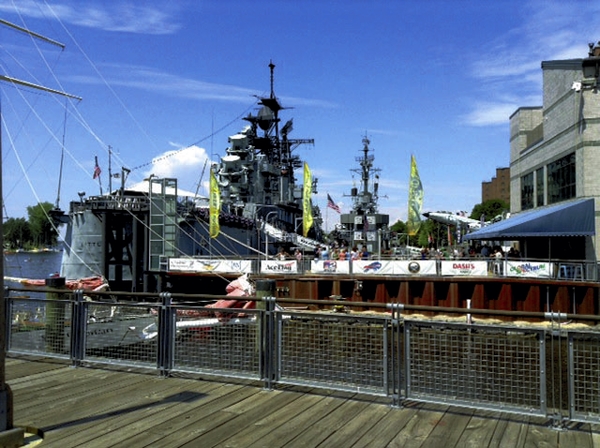 Freeze toured all the ships at Naval Park in Buffalo Saturday morning before going into Canada in the afternoon.

Last night, I stayed in the worst room along my trip. Not much worked and I had to use my tools to adjust the air conditioner. There was no ice and the TV got 10 channels. With all that said, there is always a good side. The bed was great and clean and the motel was very quiet. One of those top flight 7-11 convenience stores was close by, and I didn’t need distractions while I tried to figure out today’s plan. There was so much uncertainty that I stayed up too late trying to figure out what to do.

I had tentatively planned on spending the day in Buffalo and then staying in a downtown hostel overnight, before crossing into Canada on Sunday. There were lots of things going on in summertime Buffalo and even Motel 6 would have been over $100 for one night. The hostel was expensive enough, but it was also dorm style, the kind I don’t like. Too many different schedules and my chance of being rested early on Sunday were slim if I stayed in a hostel. At least 14 people would have been in my dorm room.

Here is how it worked out. I needed to get my Verizon phone working and that had to be done before I went into Canada. Plus, I had to get set up to use it while in Canada, which isn’t a big deal but Verizon charges $10 for a month of international usage. I found the address of a Buffalo downtown store and saw that it opened at 9 a.m. today. I planned to ride from Orchard Park, and be there when it opened. It was only about 15 miles to the store from my motel and I had plenty of good roads along the way. An early morning rain stopped just as I hit the road.

Paul Antonucci kept working with the phone till the email was receiving and he set me up to get the Canada coverage. That was done by shortly after 9:30, then I hit Bagel Jay’s for a wonderful egg and cheese on a whole wheat bagel. While eating, I called ahead to a campground in Canada called Riverside Park and worked out a deal where I could charge my iPad without paying for power. The campsite is about what I have been paying for rooms, but I am very close to Niagara Falls and right on the beautiful Niagara River as I write tonight. Rooms and campgrounds are very expensive in this area. I hope it moderates some as I go deeper into Canada. I have some good advisors helping me with things, now that I am in Canada.

Back in Buffalo, I wanted to tour two of the top attractions in the city. Everybody that I talked to said that I must spend some time in Naval Park and at Canalside. I also wanted to see the world’s largest collection of grain elevators.

My first stop was at the ticket office for Naval Park. I talked to Karen, Pat and Amanda, who wanted to know about my trip. Pat arranged for a safe place for my bike while thousands of people were walking through. The Sullivans destroyer, the Little Rock cruiser and the submarine Croaker are all available for tours and I did them all. All are amazing World War II-era ships. The Sullivans destroyer was named for five brothers who all perished on the same ship. I believe the movie is called “The Fighting Sullivans.” The submarine is eerily cramped and every sailor on board must have known all the others extremely well.

Next, I walked along the dock area, which is now called Canalside, and watched the kayaks, bicycle boats and every kind of sailboat going back and forth along the waterway. Buffalo is said to have the largest collection of grain elevators in one city and they are using them for many unique purposes, including art galleries.

It was at this time, probably around 2:30 p.m., that I decided to go to Canada. I was close to the Peace Bridge, but was unsure exactly how the process would work and even how to properly get on the bridge. I was stopped by a guard who told me how to do it but I missed a sign and ended up past the entrance point. Suddenly a Canadian on a Surly bike waved at me and asked if I wanted to cross the bridge. He told me exactly how it works and said “Follow me!” I did, but I stopped to make several pictures on the bridge and I never saw him again.

When I crossed into Canada, I went to the head of a bunch of long lines of cars and talked with a customs agent. Bikes are supposed to do that.  He asked me a few questions, wanting to know how long I would be in Canada and why I was there. He was impressed enough that he said, “So everything you need is in those bags?” We had a nice talk and off I went into Canada with directions on a shortcut going the wrong way on a one-way road to get to the Niagara Parkway.

It was a very pleasant ride of about nine miles along the Niagara River, a beautiful blue river that I will follow to Niagara Falls tomorrow. With only 37 miles today, I didn’t ride much, but I spent a good part of the day in Buffalo, an impressive city. It was clean, and I rode about two miles on Delaware Avenue, one of the most beautiful streets I have seen in any city during my travels.

Just a few thoughts on Pennsylvania and New York for this trip. Roads were great in both states, except for the Lake Shore Road in New York that bounced me so much. I never got a horn in either state and everyone seemed so bicycle friendly. The western side of both states is much more fun than the eastern side that I saw last summer. Even Buffalo, about the same size of city as Charlotte, had plenty of bike lanes.

My iPad is charging while plugged to a pump house for a pool here at the campground. There is a chance of rain tonight, but it feels good to be camping again.

With that I will leave you tonight, to get a little ice cream. I am also going to gaze at the river for a little while. It will be dark soon and I will hit the sleeping bag for the first time this trip. I will tell you all about it tomorrow and share some pictures of Niagara Falls. See you then!