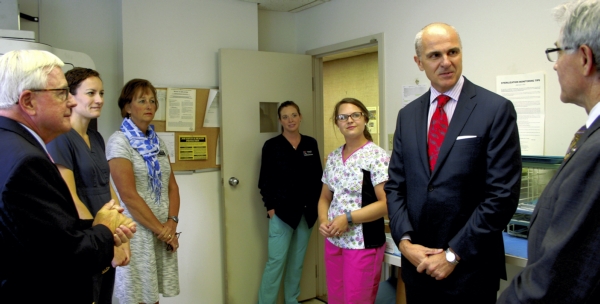 Each summer for the past four years, Curt Ladig has visited the Community Care Clinic. And each time, he’s brought along a giant check, in size and in value.

Over four years, the Delta Dental Foundation has donated some $21,307.69 to the clinic for dental supplies and materials. Ladig is CEO of Delta Dental, a Raleigh-based dental insurance company. What the company’s donation means to the clinic is that Krista Woolly, its executive director, can hire additional dental staff, thus expanding its reach in the community.

It’s been a good partnership, according to Woolly. “Any time we can free up staffing money, we can see more people.”

In 2014, the dental side of the clinic — which provides medical, dental and pharmacy services to the county’s uninsured and underinsured adults — completed some 1,700 visits, up by 90 percent over the past five years.

“It’s partly because our folks are realizing that good oral health is just as important as their overall health,” she said. “Five years ago, we didn’t have as much money available.”

“It costs $1,800 every time you walk in the door at the emergency department,” Woolly said.

Conversely, every $1 donated to the clinic provides $8 in services. That resulted in more than $5,939,744 worth of total care in pharmacy, medical and dental services provided to Rowan County patients in 2014.

Emergency department visits are one reason for the continued escalating costs of health care, said Rep. Harry Warren, who was on hand for Ladig’s visit, as was Salisbury Mayor Paul Woodson.

With the clinic being able to provide more services, the grant will indirectly affect preventive care measures, Ladig said. “It’s important for the underserved population to have access to care, so we don’t have a situation of delivering high-cost care.”

On its medical side, the clinic sees patients who have high blood pressure and diabetes. Ladig noted that if patients with diabetes increase their cleanings from two to four times a year, their A1C levels could decrease a full point.

Decreased costs on the dental side lead to increased savings on the medical side of patient care, he said.

Thanks to the grant, Woolly said, she’s been able to bring in a dental hygienist once a week instead of once a month.

The grant itself will fund the clinic with nine months of dental supplies, she said. “And we can hire more hygienists and dentists.”

“We have way more dental volunteers than medical volunteers,” Woolly said. “They expect each other to participate.”

A dozen of the county’s four dozen dentists are clinic volunteers, she said.

Dr. Bret Busby, an orthodontist with Busby & Webb, has volunteered at the last two Missions of Mercy dental clinics. As a result, he now volunteers at the Community Care Clinic, Woolly said.

Woolly has been executive director at the clinic for the past three years. In that time, she’s initiated the practice of hiring recent college graduates who are headed for careers in medicine.

“We’re serving as their gap year,” she said. “These kids are smart, and they know computers.”

But she’s found that it’s nearly impossible these days to get into physical therapy school or dental school on the first try. By working at the clinic, these young people gain valuable experience that helps them distinguish themselves from other applicants.

“It’s great,” said Nealeigh Lefler, a dental assistant, who’s been working at the clinic since March. She completed her undergraduate studies in December, and is still waiting to get into dental school. She volunteered at the clinic last summer.

“It’s been great getting to meet patients and help them, because they’re really in need,” she said.

Lefler is in the process of reapplying for dental school, she said. “Hopefully this next year will be the winning year (for getting into dental school).” Lefler added that the experience she has gained there has been an invaluable start to her future goals.

“We’re being what we need to be in our community to help get our kids into graduate schools,” Woolly said. “And hopefully they’ll come back to Rowan County to serve.”

You can stand on the sidelines while waiting for grad school, Warren said, or you can do work that’s related to your field of study.

“It’s great that you can provide that opportunity,” he told Woolly.

Woolly said that the clinic has referred patients to the new Davidson County satellite office of the new ECU dental school, called a service learning center.