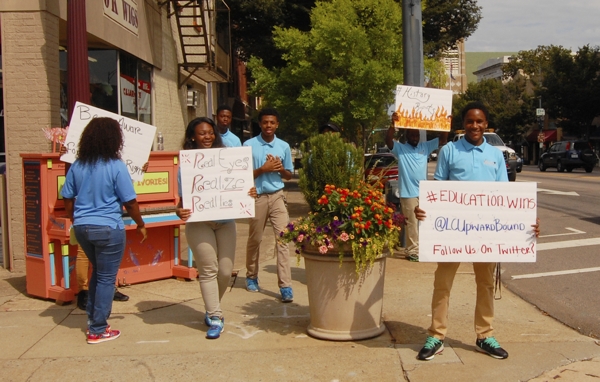 Upward Bound students held a demonstration based on their study on civil disobedience. Jeanie Groh/Salisbury Post

Upward Bound program prepares students for the classroom and their future

TRIO Upward bound is federally funded a college preparatory program for low-income and first-generation college students. The program aims to provide the skills needed for teens to enter and succeed in college.

There are 110 students enrolled in Livingstone’s program, which is one of 800 in the nation.

During the school year, Upward Bound serves primarily as a tutoring program. Over the summer, however, it offers a five-week intensive academic experience for students. The summer program gives them a head start on the classes they’ll take during the school year.

“Anything that’s in their curriculum, we do,” said program Director James Davis.

The program touches on common core subjects such as English, science, math and the classics. Students take anything from English classes to robotics.

Upward Bound isn’t just about academics, though. Students also develop their leadership ability, go on college tours and learn how to apply for college and financial aid.

Davis said his goal for the program is for students to have successful college careers, and then for them to come back and give back to the community they came from.

One of the focuses of the course was civil disobedience. Starting with Henry David Thoreau’s essay on the topic, Riley’s students studied activists and protests throughout history and up to the present day.

As a culmination of their studies, they decided to hold a campaign to share what they learned with their fellow citizens.

So, they applied for a permit from the Salisbury Police Department and got permission to hold a campaign on two corners of the intersection of Innes and Main streets in downtown Salisbury.

They waved signs with several hashtags, such as “#BeAware” and “#HistoryRepeats” for passersby to look up for more information, and chanted “Fight for your rights, but always do it right” and “Remember this is not a protest; it’s a demonstration.”

“We really wanted our chants to help people understand what we were trying to do,” Riley said. “We wanted everyone to know that it is acceptable to express freedom of speech, but it is more important to understand that being too emotional and forgetting the main goal could prevent unjust laws from being changed.”

“We’ve been studying about civil disobedience,” said Brizharion Neely, a junior at North Rowan High School. “Some laws are an injustice to others’ lives.”

Neely added that it’s important to stand up and to protest for those people, but protesting should be done “a good way” to avoid “social unrest.”

Salisbury High School students Bionne Dillard and Alexus Singleton said it was important for protesters to be peaceful and to have the right attitude.

“Come out here with a positive attitude and get a positive outcome,” Dillard said.

“This is not a protest, it’s a campaign,” Singleton added.

What now? ‘Fame’ serves as starting point for more dialogue