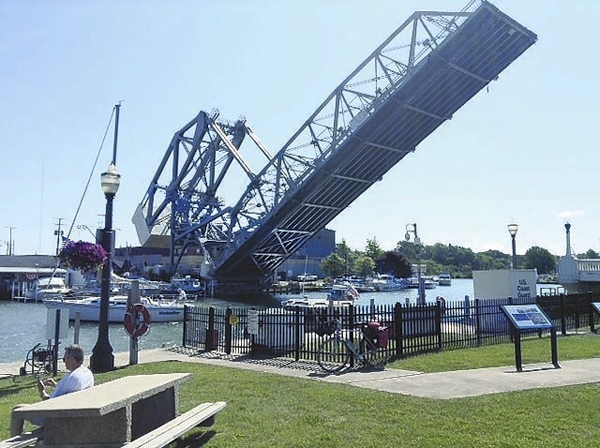 David Freeze/For the Salisbury Post This Bascule lift bridge in Ashtabula, Ohio, is one of only five remaining in the country. It is counterweighted with a huge block of concrete.

I submitted yesterday’s story very late Tuesday night after I arrived in Ashtabula. I got settled in at the Cedar’s Motel and finally submitted it close to 10 p.m. I am reversing things tonight (Wednesday) and submitting today’s update early because I am going out to see the sunset on Presque Isle Park near Erie, Pennsylvania.
Today has been wonderful again. Because of the late night, I didn’t get going quite as early as normal this morning. My night in the Cedar’s Motel was great and the owners were very helpful and fun to talk to. Lynn and Marty Wetherholt made sure I knew where to go first thing and how to travel along the waterfront.
My first stop was to see the famous bridge of Ashtabula, one of five remaining bascule lift bridges in the country. The bridge doesn’t open in the middle like a regular drawbridge, but it lifts up one end while counter weighted by a huge block of concrete. I was told that it goes up every half hour, but I was there for the 9 and 9:30 times, and it did not go up. I found out later it only lifts when a boat is waiting. Also, a very loud siren sounds all around the harbor front area before it starts to lift. I finally did see it rise at 10:30 a.m., just after a visit to the Hubbard House.
The Hubbard House is the most famous house in Ashtabula because it was the final stop for freedom seeking slaves before they got on a boat and were ferried to Canada. The slaves would leave the Hubbard House and walk 1/4 mile to waiting ships and friendly captains who took them across Lake Erie. Rick Richardson was my informal guide to the house, since we could not get in. Rick and I talked about the lasting effects of slavery, segregation and how proud both the southern and northern families were of their Civil War ancestors.
After crossing the famous bridge and heading east on State Road 531, I got some fantastic views of Lake Erie. It looks as huge as an ocean, the only visual difference being that the water is pale or brown close to the shore, then it is a beautiful blue clear to the horizon. On my ride, I noticed there were not many houses built on the water and very few of them were exorbitant. I noticed a big freighter going by and wished I could spend more time looking at the water before I had to leave.
The next town was Conneaut, with several big parks and lots of houses along the water. I rode into the municipal park and got a look at the beach. The waves were bigger than the average waves at Myrtle Beach, but admittedly today had a strong wind off the water. Lots of people were out along the beach, even though the air temperature was 75 and the water temperature was 68. The breeze kept me a little chilly all morning, particularly when I was in the shade.
Immediately past Conneaut, I left Ohio and entered Pennsylvania. As soon as I passed the state sign, the roads were a little better and the ride only had a few small hills.
The two towns first up in Pennsylvania were West Springfield and Lake City, even though I only rode through the outskirts of them. My goal was to get to Erie and ride through part of Presque Isle State Park. The park is out in Lake Erie on a narrow strip of land with lots of beaches and activities. The owner of the Riviera Motel, Alice Moorehouse, told me that I should see the sunset and gave me some tips on doing it. She also arranged for me to have the room with a heart shaped Jacuzzi which I would only be charged for if I used. Alice is a cyclist herself. Glenn Henry, the desk clerk, gave me some more tips and I already know I really like this place. It is less than half a mile to the start of the Presque Isle route, SR 832.
So the story goes in first tonight and the pictures of the western sunset over Lake Erie will come in the next update. I can’t wait to see how it compares to the sunsets in Key West last year. I already know the beaches will be way better.
With that said, I will add some miles tonight, but all I have so far is 45 for the day. I spent the morning sightseeing and will finish the day the same way. I have been asked about how far I have to go to finish the trip to Owen Sound and then to Toronto. The answer is about 475 miles, give or take whatever side trips I might do.
With that, I am heading out to get my wish and stare at the water for a while. It is just about my favorite thing to do on these trips. See you tomorrow!