David Freeze: A rewarding day with lots of miles 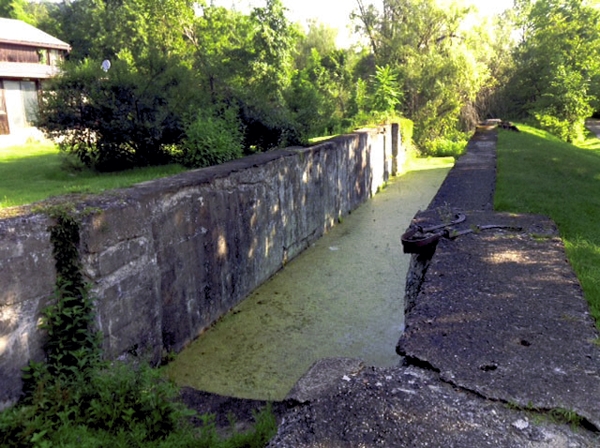 This was a canal lock where the canal boats were raised and lowered on the Ohio and Erie Canal. Photo by David Freeze, for the Salisbury Post.

I stayed up way too late last night trying to figure out a plan for today. I wanted to see a lot of things, yet try to follow the Adventure Cycling map because I knew their road choices would be safe ones. Mine are not always as well thought out.

Right away this morning, I had to get up and get going to rejoin the Adventure Cycling route somewhere close to Akron. I had left it yesterday to find the motel near Medina, Ohio. I ended up missing what I thought would be the best road and pedaled right into the outskirts of Akron. I asked a beer truck driver for directions and he knew exactly what I should do. I had been on State Road 18 and he showed me how to find the Cuyahoga River and Riverview Road toward Peninsula, Ohio.

The first highlight of the morning was that Riverview Road ran right beside the Ohio and Erie Canal Trail. I had ridden the whole trail a couple of years ago, but jumped on it again this morning for about six miles. The canal locks that raised the canal boats were on this segment as were lots of views of the old canal. The trail is hard packed gravel and worked great. If you are considering a fun bike ride, think abut this one. You can ride all the way into Cleveland while seeing lots of great scenery along the way.

A usual thing that I remembered from the earlier ride is that the sounds of loud shotguns can often be heard from the various cornfields nearby. Those are artificial and are used to scare the birds away.

From Peninsula, I headed to Hudson. Hudson is probably the prettiest town I have seen on this trip. It is famous on the Underground Railroad because it was the home of John Brown who led the raid on Harper’s Ferry. A little-known fact is that the U.S. Army commander was Robert E. Lee, a short time before he resigned his commission to fight for Virginia and the Confederate States.

After Hudson, I rode through the countryside on some very challenging roads toward Mantua Center, another small town with a lot of history. There was part of an early 1900s school remaining, complete with a 12-holer outhouse for the boys. No word on the situation for the girls.

The next town up was Burton. Burton prides itself on a special relationship with President’s Garfield and Hayes. Garfield said it was the closest thing to a New England-style town in the area.

My real treat came as I left Burton. With the major climbing complete by the time I left the city limits, I finally had a little downhill. During that more pleasant riding, I saw 15 miles of mostly Amish Farms along the Burton-Windsor Road. Different about these Amish is that I only saw one dairy farm. Many of the Amish homes were not part of farms at all. I rode by as many of the Amish men were going home from their lumber mill jobs. Some walked, some rode their carriages, but most rode in passenger vans and were dropped off at home. I shared lots of waves and hellos with the Amish folks and was interested to see lots of hay cutting going on.

I then rode through Windsor, Rome and Rock Creek. At a grocery store in Rock Creek, I told the clerk that I had 15 miles to ride. He said, “Are you going to ride all of that today?”

Next, I got on another beautiful bike route called the Western Reserve Greenway Trail for the rest o the day’s ride. Bypassing Austinburg for my destination of Ashtabula, another hotbed of history. That is where I will spend the night after 99.3 miles.

I met Joe Toth on the Greenway trail and asked him what to expect when I got to Ashtabula. Joe gave me plenty of information, including that he has a cousin who lives in Kannapolis.

A long day for sure, and I have already eaten a Pizza Hut medium pizza to help with the incredible hunger. I have plenty more to eat and can’t wait to get to it.

Tomorrow, I will spend the morning sightseeing in in Ashtabula and then head for the waters of Lake Erie. My riding tomorrow will be much less, but that is OK.

I am close to leaving Ohio. It might be tomorrow and if so, I will head into Pennsylvania. More good stuff to come.