David Freeze: Immersed in history and a short ride 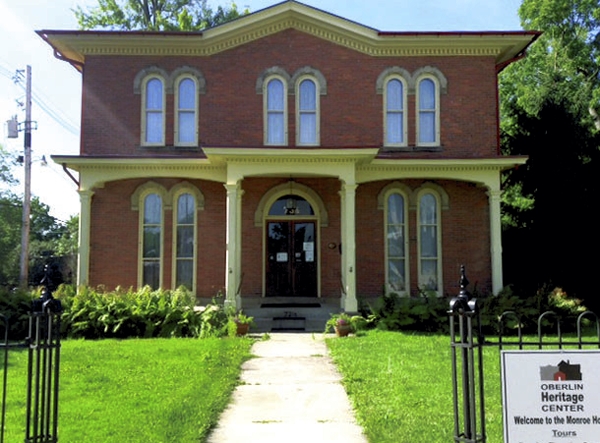 The Monroe House, built in 1866 and the home of an abolitionist for 60 years, is now the Oberlin Heritage Center. David Freeze / for the Salisbury Post

Last night, I got everything done and turned on the TV to find one of my favorite movies playing. It was very timely to see “Glory” again last night, or most of it before I fell asleep. “Glory” is about one of the first attempts to use blacks as Union soldiers in the Civil War. It turns out that one of my first things to see this morning was the statue honoring General Giles Shurtleff, who did the same in Oberlin and Lanier County, Ohio.

I left the motel this morning and rode into a much anticipated visit to Oberlin. Betty Dan Spencer had told me just a little bit about Salisbury connections to the area. I expected to spend about half a day learning about the town before riding toward the next destination.

What I found was a very special morning, full of wonderful and caring people who took time to tell me about what makes Oberlin special. I rode around Oberlin College first, before realizing that I needed to get a plan together to make best use of the time. I called City Hall and talked to City Manager Eric Norenberg, who offered to get some material together for me. Amazingly, Eric’s daughter is a Catawba College graduate, still living in North Carolina.

Eric sent me toward the historic cemetery and then to the Oberlin Heritage Center. I had a nice talk about the area with Bob at a convenience store. Bob and a friend had done a bicycle tour around Lake Erie. Bob told me about seeing Michelle Obama give the commencement speech at Oberlin College this past May.

After seeing the cemetery, I rode back up to the Heritage Center and was disappointed to see that it is closed on Mondays. I walked around and made some pictures, and got ready to leave just before Terry Hobbs pulled up while mowing the yard. Terry is a docent at the center and was able to arrange a private tour for me. Mary Anne Cunningham did a great job with it and helped me understand about the history of Oberlin and some of the most popular sites to see.

After the tour, Terry and I talked more about cycling. He is a regular rider and had some specific questions about touring on a bike. Another great guy who would be a good friend should we live close together.

I got back on the bike and rode first to take a photo of the railroad tracks rising out of the ground, a popular local symbol of the success of the URR. Then I rode over to the First Congregational Church, famous for many things. Once one of the largest buildings west of the Appalachians, it has hosted famous speakers that included Mark Twain and Martin Luther King. A four-year-old slave boy, Lee Howard Dobbins, became sick with tuberculosis and died in Oberlin. Church members had cared for him and after his death paid for a monument in the town cemetery. Over 1,000 members attended the ceremony.

Pictures of the Martin Luther King monument and also one honoring those who died in the Harper’s Ferry Raid came next. Leader John Brown and three local men were honored after they were killed or were hung.

Just a little information about Oberlin and Oberlin College completes my recap of the morning. Though Canada was considered to be the “promised land,” many slaves felt so safe in Oberlin that they stayed or returned later. Since the town began in 1833 and the college came soon after, both united in an organized fight to abolish slavery. Oberlin earned the title “The town that started the Civil War.”

After a morning meeting these wonderful people and touring the town, I rode away while recapping all that I had learned. This had certainly been a special morning for me.

I joined the Adventure Cycling map again and headed east, mostly riding through rural roads. The only towns up soon on my map were Lester and then Medina. I joked that if I could just get to Lester, I could get something to eat and drink. My map already said that the town had no services and I found out later that it had a road closed, similar to the one from yesterday. Instead of challenging the system this time, I rode onto the detour and found myself in Mallet, big enough to get a drink and some cookies.

Then, I rode to Medina, a larger and very beautiful town complete with a bandshell and a large park in the center of a traffic roundabout. I decided to ride out to Interstate 71 on SR 18, and get a room at another Motel 6. On the way, I got groceries and stopped on at Goodwill to get a pair of shorts in case I need them for the rest of the ride. Both these things were accomplished and I am about to put my feet up after a morning of sightseeing and an afternoon ride of 42 miles.

One reader has asked that I let everyone know the importance of the URR quilts. There is some evidence that quilts were used to signal slaves as they passed through each station heading north. Quilts hung on the line with a per-arranged set of markings or symbols gave the slaves the information that they needed concerning their safety.

With that said, I am now working east to go south of the heavy traffic in Cleveland and then will go north to Lake Erie. I expect one more full day in Ohio and then will move into Pennsylvania. The waters of Lake Erie will be a welcome sight.

Thanks again to my sponsors for this trip. Fowler Physical Therapy, Gear for Races, Vac and Dash, Partners in Learning and Skinny Wheels Bike Shop all are much appreciated as well as the Salisbury Post who gives me the opportunity to send a daily adventure update.

My feet are going up. See you tomorrow!