David Freeze: Will this be the one? Blame it on the glaciers 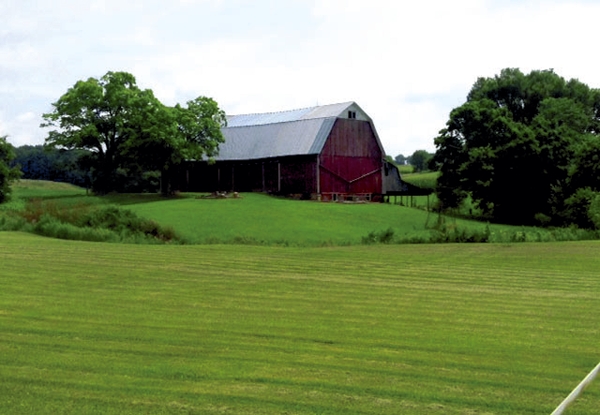 These old barns were all along David Freeze's route Sunday. Most are still in use in some manner. David Freeze / for the Salisbury Post

I had another wonderful night’s sleep Saturday night in Mt. Vernon, Ohio. I was up and ready to go before the sun came up, hoping to get an early start Sunday on what I expected to be a very hilly ride. My route was off the Adventure Cycling map because I wanted to see some other towns and make it to Oberlin, Ohio, before nightfall.

I actually rode into the town of Mt. Vernon first, after only reaching the outskirts on Saturday. There is a roundabout in the center of town that has a memorial to the town’s Civil War soldiers squarely in the middle. Mt. Vernon was also the home of Daniel Decatur Emmett, the author of “Dixie.” A little known fact is that the famous song was written by a Northerner and was almost as popular with Union forces as with the Confederate Army. I got on Ohio Route 3 and headed north. The first 20 miles were very challenging, especially on a humid morning.

First town up was Amity. Nobody was moving yet, but I did see that the dairy bar also sells produce. Then on to Jelloway, a little bigger town that reminded me of the Amish presence in the area. I saw one carriage very early as I pushed up a hill to head out of town. As the day progressed, I saw lots of manure in the road. A good thing, in my opinion.

Finally the climbing took a break as I rode into the Mohican State Forest. This is a very busy camping and canoeing center. I noticed that one of the canoe companies has everything painted school bus yellow. The canoes are the same bright yellow as the buses, a little different than the colorful ones used by other outfits. I guess they saved a lot of money by not having to paint the buses.

In a day of unusual things, I got the two best egg and cheese muffins yet near the Mohican campground in a convenience store. The clerk even added tomato at no charge.

Next town up was Loudonville with a beautiful tree-lined entrance and busy downtown even on a Sunday. As I was leaving town, I met Joe Fodor, who walked over to ask if I needed help with directions. What followed was a very easy conversation about bike touring and the surrounding countryside. Joe had even managed a farm that has a bike hostel. He had his old Schwinn touring bike with new handlebars loaded on his truck and was headed out of town for a ride. Joe lives in McKay, my next town up, and reminded me that there were lots of hills coming up, especially the first one after I turned right out of McKay.

The ride to McKay was relatively easy until I made that turn onto State Road 95 and hit Joe’s hill. I began to wonder after close to an hour of low gear climbing, “Will this hill be the one, the highest one that lets me start working downhill?” Over and over, I climbed and coasted down, then climbed again. During this, I was reminded that Joe had said, “The hills here are because of the glaciers.” That is exactly the same thing I heard about the Oregon coastal hills in 2013 and the Maine hills in 2014. Darn glaciers! Guess they didn’t ride bikes.

As I left SR 95 and turned onto SR 89, I found a “road closed” sign. Not aware of how to get around the situation, I took it head on and rode past the sign. I found that the reason for the road being closed was some big drain pipe work. The road was actually not there for about 8 feet. I could turn around or get across the creek underneath. Carrying the bike across the creek was not bad, and I gloated that I had made it until a resident told me that there might be another one on down the road. Thank goodness there was not another incident.

On through Jeromeville and Polk on 89, both small towns about 200 years old. In fact, the bicentennial celebration in Jeromeville is this coming weekend.

SR 89 became SR 58, and I got a better road and a a full-fledged tailwind. I stopped in Huntington to use the bathroom at Chet and Fern’s Groceries and was told to go use the one in the park because the store didn’t have one. Interesting!

Then, I stopped to pick up groceries and food for the evening in Wellington. There was a big downtown celebration going on with music and much more. Lots of happy people. Speaking of unusual things, the painter of the Spirit of ’76, Archibald Williard, lived in Wellington. That is the painting with a fife player and two drummers marching along in their Continental Army uniforms.

With rain chasing me in, I made it to one of the coolest motels that I have stayed in, the Sunset Motel in Oberlin, Ohio. I will spend some extra time in Oberlin tomorrow because it has Salisbury connections.

Today’s ride was 76 miles, hilly early and very easy later. I realized today that there is a certain degree of comfort when I climb on the bike. It just seems right to be heading toward another day of discovery. See you tomorrow!