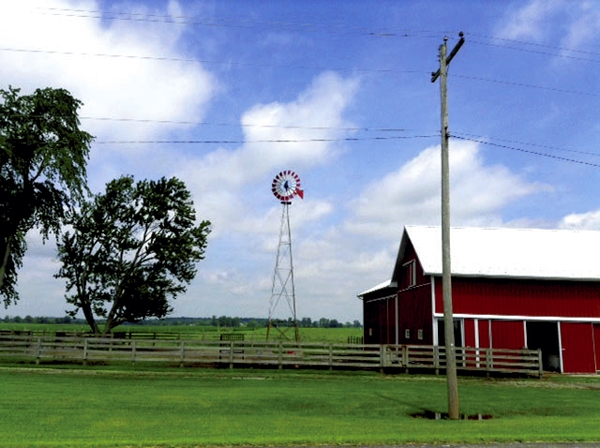 David Freeze loves windmills and this one is especially colorful along State Road 42 in Ohio.

Last night, I slept near London, Ohio, at one of the best Motel 6 locations that I have seen. This one had all the modern stuff in the room, including lights that actually cut off on their own if they sense no motion. This was a little spooky at first. This motel was a complex of four large one-story buildings. It was about four times the size of a normal Motel 6, mostly because the motel was sandwiched between two huge truck stops. I am always skeptical that any WiFi will perform as promised, but this one was as good as can be. My standard is WiFi at McDonald’s, which always seems to be top-notch.

Out early again today just as the sun came up, the early coolness quickly warmed up. I hopped back on State Road 42 and headed north. It was easy riding early with flat farmland and a gentle tailwind. I rode through Gillivan, Arnold and New California quickly. Arnold had two streets, Railroad next to the rail line and North just next to it as I pedaled away. Then there was a series of hills, heavier traffic and poor shoulders that had me a little concerned, especially with a large volume of dump trucks running. Everything settled out as I got past the turnoff point for the trucks.

The farms were beautiful, some of the terrain reminding me of Kansas in 2013, with horizons far away. Some standing water still remained, with more storms on tap for tomorrow and Monday.

My first real town was Delaware, the birthplace of our 18th president, Rutherford B. Hayes. I rode into the town and wanted to stop in at the visitor center but found it closed even though the sign on the door said it would be open at 9 a.m. Ohio Wesleyan University is in Delaware and sits on both sides of Sandusky Street, near the middle of town. Sandusky is the main drag. The only professional lacrosse team in the Midwest plays in Delaware and is called the Ohio Machine.

Back on 42, I rolled through Leonardsburg and Ashley. Ashley seemed to have a high number of historic homes, but only a small convenience store looked busy. Now on State Road 229, I rode through Marengo and spotted a real grocery store, the only one I saw all day. On to Sparta and some sudden serious climbing to the highest point of the trip so far, so much so that I ended up with a few nice views. Then came a gradual downhill into the outskirts of Mt. Vernon, where I will spend the night after 74 miles.

One stop along 229 came at a historical marker for the settlement of Alum Creek and an early Quaker Church that housed runaway slaves on their journey north. A later version of the church still stands.

The last highlight of the day was meeting Brittany Harris, a fellow cyclist who made me a great veggie sub at the local convenience store. She asked about my ride and probably wondered how one person could eat so much. I might go back and get some ice cream later.

It was an unusual day that didn’t include many people meetings. I am looking forward to continuing north and am just a couple of days from Oberlin, Ohio, and more Salisbury connections. About that same time, I will get to cycle along Lake Erie. Most of the towns today were really small and traffic was light. I expect that to change after the next few days.

I don’t know exactly yet where tomorrow will take me. The storm chance is high again so I will keep that in mind while planning tonight. Sundays are usually good travel days, especially if I can find a town that has egg and cheese biscuits early. That will be my plan and then take it from there.

It is hard to believe that three weeks of this journey are complete, leaving two to go. Niagara Falls and entry into Canada are just days away now, both which I look forward to with great expectation.

That is it for today. I will see you tomorrow!