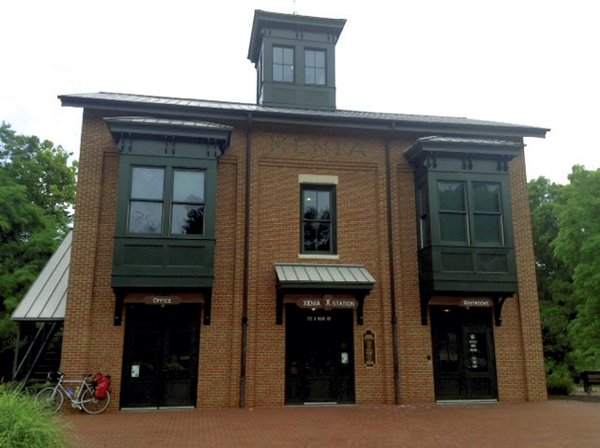 This is the Xenia, Ohio Bike Hub where Freeze thinks four different bicycle trails meet. It is a renovated train depot, formally called Xenia Station. It is where his ride started Friday.

When I went to bed last night in Xenia, Ohio, everything about today depended on whether my Express Mail envelope arrived in the Xenia Post Office this morning. I put it out of my mind, hoping that the maps to continue my journey would arrive. If they didn’t, I still had options but hoped that I wouldn’t need them.
Up an hour later than usual, I went to the Country Inn office for the advertised continental breakfast. The girls in the office explained that the breakfast was only on Saturdays and Sundays. I didn’t take that start as a good sign.
I picked up an Ohio map, then headed for the post office to see if the envelope had come in. Postal worker Jim Pallant was extremely personable and efficient as he dealt with the customers in front of me. Jim then headed back into another area and returned smiling when he had the envelope. It had just come in a few minutes before, overnighted from Montana. I quickly opened the package, read the current map and saw that I needed to get on another bike trail in the same town. Nobody seemed to know exactly where that trail was, but the postal workers sent me to what is called the Bike Hub, actually the renovated old depot called Xenia station. With a couple of sputtering starts, and some well meaning directions, I ended up on the trail out of town that seemed right.
This trail didn’t have any signs on it, but I kept riding. When I came to Jamestown, I knew something was wrong. As it turned out, I was on the wrong trail, heading directly east and about 15 miles from where I was supposed to be. With some fantastic directions from a nurse and her truck driver dad, I took the South Charleston Road and headed northeast. I was amazed that the terrain was now mostly flat and all farmland, beautiful Midwest farmland in fact. There was also a fantastic tailwind that made for a very enjoyable ride as I got back on track with my arrival at the right bike trail in South Charleston.
I met Ryan and Sally Meanor there, and had an amazing talk just before they were about to head out in the opposite direction on the trail. They asked questions about my ride and also told me some things about the area and my destination of London. We ended our talk when Ryan and Sally prayed for my continued safety as I get closer to Canada.
Nearby, though I did not get to see it, was Springboro, Ohio. Springboro was populated with Quakers who were willing to break the law to shuttle the Underground Railroad freedom seekers northward. Between the years of 1815 and 1864, it is believed that approximately 4,000 slaves were sent north through Springboro.
Simple signals were developed by the residents as a sign of safety for stopping in particular homes. A candle in the window meant all was well, while a quilt on the line meant keep going and tread softly. A specific arrangement of flower pots might also be used as a signal.
After a ride of about 11 miles to what I thought was my final destination of London, Ohio, I stopped to ask for the location of my intended motel. Several didn’t think it was still open, but one guy was adamant that it was. What followed for me was an almost three-mile ride against the same strong wind that had pushed me so well earlier. I found the motel closed, or at least no one was around and no one answered the phone.
A fast ride of about ten miles was again aided by that tailwind as I headed back through London for a Motel 6 near Interstate 71 while a rain storm threatened. What should have been a short day ended up later than it should with 54 miles after picking up my maps. I am now in a very nice Motel 6 and ready for the rain if it comes. In fact the biggest storms seem to be where I was yesterday,just north of Cincinnati.
A couple of interesting things have been happening. These small horseflies have been harassing me on the bike trails, particularly when they are shaded and the winds don’t blow much. One of the flies bit me today with more force than I expected. Another funny thing is now occurring, just as it did on the last two summer’s long rides. When I walk, my legs don’t work just right. Sometimes my legs want to go faster than I do, making for an odd feeling and some awkwardness.
Best wishes on Saturday for a fantastic Farmer’s Day and a competitive Greenway 5K. I will be headed north and east toward Delaware, Ohio. Looks like some opportunities for camping will be coming up as well since I will be going through some extremely small towns. It looks more opportunities for adventure. I sure hope so!
Now, it’s time for some ice cream just before bed.