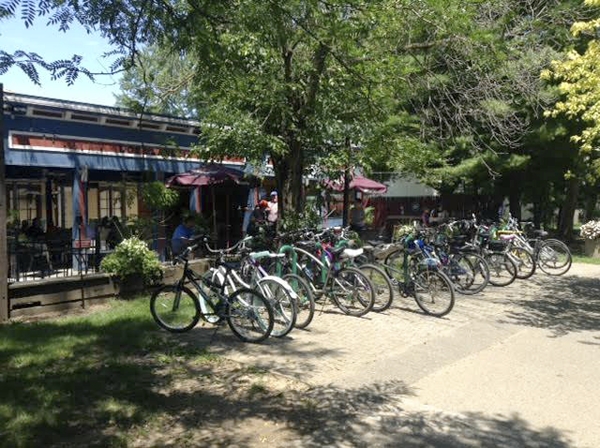 This was the scene at a restaurant in Loveland, Ohio, that is on the Little Miami Scenic Trail. Bikes were everywhere all day as Freeze rode the trail for over 50 miles. David Freeze/For the Salisbury Post

After I ended up in the great room last night at the Holiday Inn Express in Belleview, I set to work to get my nightly report submitted. I discovered while working through the day’s activities that my last two Adventure Cycling maps were gone. I only carry two small bags of things on the bike and know each item inside all too well.

Without those maps, I don’t know exactly where to go to follow the Underground Railroad Route. I have a good idea of the basic route, but there is much detail that I need available to make the best choices. Nothing worries me too much about these adventures, but this screw-up sure did. There was a chance that I had mailed them home earlier by mistake, but found nothing when I checked on that.

The maps had simply gone the way of my shorts from the cross-country ride and again on this one. They had vanished. My shorts disappeared somewhere in Colorado in 2013, probably in Kentucky on this trip, and one other time that has nothing to do with a bicycle adventure. Late this morning, I ordered by USPS Express Mail the replacements and hope to get them tomorrow here in Xenia, Ohio.

So, today’s route was a guess more than anything, complete with some of what I remembered and help from several new friends. I left Belleview, Kentucky, this morning and pedaled back across the bridge into downtown Cincinnati. I still had the details of how to get out of Cincinnati going east and north. The only trouble is that I was supposed to take Market Street for 4 miles. My map didn’t know that this street is now called Pete Rose Way. With help from a police officer and cyclist Jeff Westrich, I found State Road 50 and headed east on Wooster Pike.

My goal was to find the Little Miami Scenic Trail and head toward Milford, Ohio. Jeff gave me great directions, but it was just too much to remember, so I stopped twice more before finally finding the trail. Once on it, I was back on track for the day.

The Little Miami River flows down toward Cincinnati from somewhere north of Columbus, Ohio. The Little Miami Railroad was started in 1836, and President Lincoln rode it to his inauguration. During the Civil War, it was used to move troops. The railroad stopped operating in 1962, with Ohio building a multi-use paved path from Milford to Xenia, Ohio. It is the best rail trail that I have been on, beautiful and well kept in every way. There are historical markers and lots of benches and picnic areas. All told, I probably saw over a thousand cyclists using it as I rode upriver for over 50 miles. People of all ages and abilities were out enjoying the trail and the spectacular weather. Pedaling upriver means no coasting, so it was great for me to arrive in Xenia late this afternoon. My legs were toast by then, after 74 total miles.

I was especially happy to see that Rowan County commissioners finally joined the surrounding counties by approving the Thread Trail. In one particular town today, I saw dozens of bikes stopped (and not locked up) to eat lunch, get ice cream or just walk around. Signs were posted along the trail about food, bike shops, accommodations, etc. for all to see as they pedaled through.

Tomorrow will be interesting. Once again, I know the basic route for tomorrow, but need more. Since my package of new maps is supposed to arrive at the Xenia Post Office, I will wait for them to finalize the plan for the day. Some good can come of that delay.

I have been getting in late just about every day, and my usually reliable internal alarm clock has failed me the last two mornings. An extra hour of sleep will be nice, and I will hopefully be more organized tomorrow than I was today.

Xenia has a rich history, some to do with the URR that I will research tomorrow. Also, in 1974, the second largest series of tornadoes ever recorded in the U.S. leveled half the city’s buildings and left 10,000 people homeless and 34 dead. Xenia is about the size of Salisbury.

Now that I am firmly in Ohio and headed north, it is with some mixed emotions that I think back on the pedaling this time in Kentucky. Some of the roads are better, especially those nearer the Ohio border, but all in all, Kentucky has horrible roads. Not just for a cyclist, but in general. The jarring ride along the edges of the country roads is assured, whether it be from rumble strips or disintegrated paving. I will remember fondly all the good people that I met, especially Terrie in Rabbit Hash. Everybody should visit Rabbit Hash at least once.

When beginning the planning for this trip, I researched the route and why it ends in Ontario, Canada. Once the slaves who used the URR made it to Canada, they were finally free. Salisbury has a local couple who are Canadian and have ties to Owen Sound, Ontario, the formal end of the URR. Many of the slaves who reached Owen Sound stayed in the area. They have celebrated Emancipation Day for many years. This year, the celebration day is Saturday, Aug. 1. I hope to reach Owen Sound on that day. More as this develops.

One leftover from yesterday is worth mentioning. In the URR Freedom Center in Cincinnati, Salisbury is listed as on the Southern Appalachian Corridor of slave transportation between Norfolk and Charleston.

Now, with everything said for today, it is time to wash my socks again. They need it. See you again tomorrow!

School board opts to forego dome if money can’t…