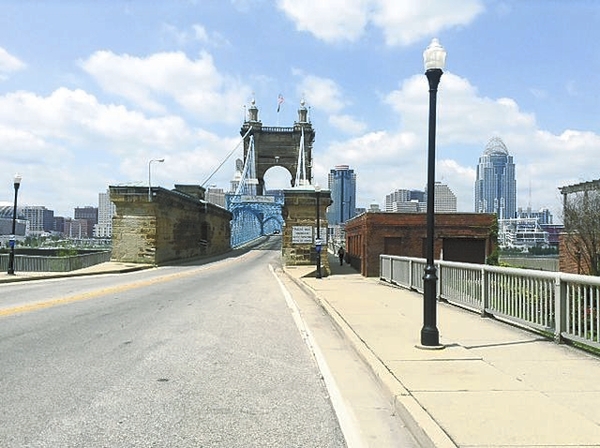 David Freeze/For the Salisbury Post Freeze rode into Cincinnati on Wednesday afternoon, just a day after the MLB All-Star Game.

David Freeze: A Day of Surprises

When I mentioned last night that there was a good chance for a surprise or two today, I had an idea of what I wanted to do, but not exactly how to do it. Some great things came together to make a fun day.
More than one request had been made for me to stop by a little town called Rabbit Hash, Kentucky, before I left the Bluegrass State. While I had not heard of it myself, I checked their website and thought the side trip would be worthwhile. That was my planned surprise for today.
While not on my mapped route, I felt like today was a good time to do something for fun. First thing, I headed out of Florence, Kentucky, and pedaled toward Rabbit Hash. I got on the most hilly 15 miles of road that I had seen on this trip. Some of my riding was at just over 4 mph, about as fast as I can walk. Rabbit Hash is on the Ohio River and was founded in 1813. It is a small settlement that looks much the same as it did then. I met Terrie Markesbery, just as she opened the general store. After a wonderful conversation that was too much about me, Terrie planned out the best route for me to use to meet the rest of my goals for the day. Bottom line, if you are ever in western Kentucky, go see Terrie and the town of Rabbit Hash.
My next goal was to get to Cincinnati and visit the Underground Railroad Freedom Center. Terrie wrote out her plan, road by road, all bike friendly. I used State Roads 338, 18, 237, 20 and 8.   All had plenty of room for me to ride, the first series of roads like that since I had been in Kentucky. There were very few rumble strips and plenty of new pavement.
Near Hebron, I spotted the entrance to Anderson’s Ferry, a private operation that had been ferrying people across the river since 1817. When I pulled into line, Steve McCarthy was in the truck in front of me. We talked while we waited for the ferry to return from the other side of the Ohio River. Steve and I talked weather, directions, and why I was riding. Once we pulled onto the ferry, Steve paid for me to ride. We fought the strong current and made it to the Ohio side, and Steve left while I made my return to the Kentucky side. That was my first time on a private ferry, and it was certainly fun to be out in the middle of the Ohio River.
Back on the road, I headed toward Covington and my bridge entrance into Cincinnati. Just as I got started, three F-18 jet fighters hit the after burners above me. As my good friend Kenny Roberts would say, they were just practicing yesterday when flying over the Major League Baseball All-Star Game. The real goal was to celebrate my ride on the Anderson Ferry.
On to Covington and the entrance to the John Roebling Bridge, built in 1867. It is a beautiful old bridge, much like the Brooklyn Bridge in New York City. It has a walking/cycling lane on each side, so I pedaled right into downtown. Signs of last night’s All-Star Game were everywhere. Workers were taking down much of the fan-fest stuff, but there was still a little buzz of extra excitement as I rode by.
My goal in town was to visit the National Underground Railroad Freedom Center. The Freedom Center is an incredible exhibit of information about slavery and oppression from its early existence. There were lots of fantastic exhibits, including one called  “Diversity in Baseball”. There was an actual slave pen and exhibits on many slaves who made their escape along with the freedom fighters who supported them. Lots of videos enhanced the exhibits, although two of the bigger theaters were not in operation. A piece of the Berlin Wall is also on display outside. The Freedom Center is definitely worth visiting, although I had to have a fairly serious discussion with them about how my bike needed to be allowed inside. They finally agreed.
Back outside, it was an easy ride to Newport where I planned to stay in a Travelodge. That was until three teens from the neighborhood told me that it had just been torn down. I stopped at the Holiday Inn Express in neighboring Belleview to check rates. General Manager Joe Lockaby and Tonya Cole made sure I got a great room at a very reasonable rate. They came out and looked at my bike while listening to the whole story of my rides. Thanks to them and Holiday Inn Express for getting me into a room when time came to get off the road. Joe has lost weight to keep his diabetes under control, so he and Tonya made sure that I was getting enough to eat as well as staying hydrated.
With all the sightseeing today, I only totaled 50 miles. I will leave Belleview in the morning, heading north and east again. Also, it looks like the folks in Snow Bend, Ontario, are getting tuned into my ride. That will be the official end to the Underground Railroad route. More on this development tomorrow.
It has been a long and fun day. A high temperature of 80 degrees was very pleasant. I wonder what tomorrow’s travels will bring. I will let you know tomorrow night. Keep riding along!

Salisbury will come alive with ‘The Sound of Music’ Aug. 21

By Mark Wineka mark.wineka@salisburypost.com SALISBURY — On Aug. 21, Salisbury will be the place to celebrate the 50th anniversary of the movie... read more