David Freeze: A dramatic night of weather and a change of route 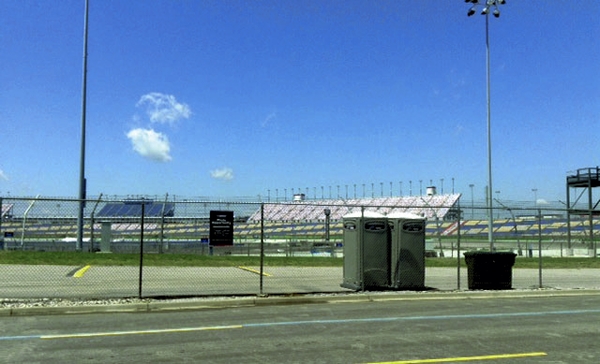 David Freeze had no idea that he was close, but after making a course change this afternoon, he found the Kentucky Motor Speedway. There is nothing else around.

When last I left you, I said that the weather in Madison, Indiana, was perfect and calm as I prepared for bed. There was a slight breeze, but hardly a cloud in the sky. That was at 10 p.m. By midnight, another torrential downpour was underway with spectacular lightning. The show lasted till just before 6 a.m.

I left the Riverboat Inn at just before 7 a.m., and rode through part of town. I specifically wanted to see the Georgetown neighborhood, the area where the Underground Railroad safe houses were. What I found was a muddy and wet street, with many of the residents up and out already surveying the damage. A TV crew was already there filming. There were flooded and muddy basements and the story of a boat and trailer that had disappeared.
The ride across the bridge back into Kentucky set me on State Road 36. I found tremendous flooding near the river and places where the road itself had significant water. There was some pavement damage from running water. Lots of limbs and gravel were in the road. I had to especially watch out for the gravel because the bike is hard to balance if I hit a patch of it. The darn rumble strips made me ride in traffic again, but as I left Milton, Kentucky, the traffic got lighter. All of the first 12 miles were along the Ohio River and past quite a few homes more than 150 years old. Then on through Prestonville and Carrollton. I took time to ride around Carrollton, the largest town of the morning. All morning, I had been looking for my egg and cheese biscuits. I never found them, but did get lost briefly when SR 36 turned off and I didn’t notice.

Back on 36, I rolled through some major climbing to visit Easterday and Eagle Station. They were very small and not even a dog barked as I pedaled through. Not much real scenery either.

Next, I turned onto State Road 467 and passed Sanders and rode into Sparta. The morning ride had only one highlight and that was the ride along the river. Nothing else much was exciting. I saw the post office in Sparta and realized that it would open in just a few minutes. Just as I returned to the bike, I met Tara Vandt, the postmaster. She helped me send home all the printed material that I had acquired during the ride so far. We had a nice talk about my rides. I noticed that Tara’s post office also serves as the town library. She had quite a collection of books in the lobby.

Upon leaving the post office, I didn’t see the sign for 467 East, so I asked a couple of folks. About that time, I thought that maybe I should consider changing the route and go see some things in the afternoon. I stopped at the local store for ideas and directions. Back to the post office, and Tara helped me get a plan together to head north instead of farther east where she agreed with me, “There is just not much to see.”

So finally I headed north more directly toward the Cincinnati area. Right away, I jumped on State Road  35 and after two hard climbs, rode right past the Kentucky Speedway for NASCAR. It is a beautiful facility. Next came Warsaw and a chance to ride again along the Ohio River. One very interesting thing that I noticed in Warsaw is something that the Rowan County School System might want to consider. The high school had an International tractor and five cars for sale in one of its parking lots.

State Road 42 East gradually got hillier as it moved away from the water. About ten miles north of Warsaw, I finally met a long distance cyclist on the road. Tyler Reutgen from California was pedaling toward me, and we both stopped to talk. Tyler started in Manhattan Beach, Brooklyn, New York and is pedaling Las Vegas. This is his first long trip and he seems to be enjoying himself. He will join the Trans America route that I mostly used in 2013. It was good to see Tyler, but once again weather was threatening, so off we both went.

Tyler told me that I had a few hard climbs coming up. He was right, and just before the last one, the storms cut lose with a vengeance. In the worst conditions that I have ridden during this trip, the rain poured, lightning and thunder were all around, and the wind kept pushing my bike to the side. Finally, after about 30 minutes, the rain stopped and the sky cleared briefly. I kept riding, hoping that the promised motels would appear soon. The traffic got too close more than once, so I will be glad to say goodbye to Kentucky for the final time in a day or so.

Finally, after riding through Union, I landed in Florence, Kentucky. I won’t say exactly why, but I am going off the route tomorrow if all goes well, hoping to visit a very unusual place. I will say that I am so close to Cincinnati that the jets that flew over the All-Star game tonight circled here a few times.

After 71 challenging miles today, tomorrow’s update might have a surprise. This ride is not about following anyone else’s plan, it is about following my dream to make the best of the trip north while visiting some of the Underground Railroad sites. I will keep working at that tomorrow.
See you then!