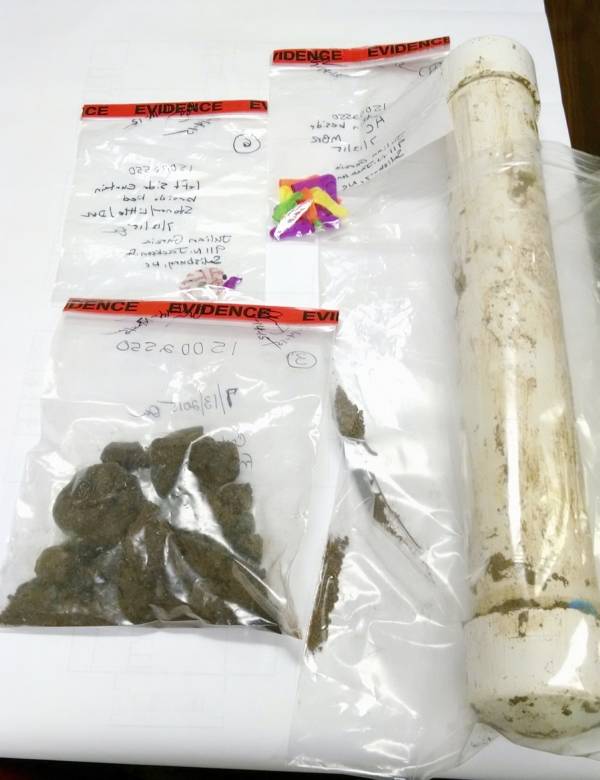 Authorities found 530 grams or just over a pound of black tar heroin in this PVC pipe at a N. Jackson Street home. The pipe also contained coffee grounds to mask the smell. Also found inside the home were balloons, drug records and other paraphernalia. Submitted photo

The Rowan County Sheriff’s Office says a multi-agency investigation led them to a stash of heroin at a Salisbury home. A K-9 discovered the drugs, weighing in at just over a pound, inside an underground pipe.

The Rowan County Sheriff’s Office issued a warrant for the arrest of Julian Lepe Garcia, 35, who lived at the home. Garcia is in the Mecklenburg County jail on related charges.

The search was a follow up to law enforcement action in Charlotte earlier in the day.  Investigators used a Rowan County Sheriff’s Office drug-sniffing dog to locate a PVC pipe buried in the ground at the right rear corner of the house.

The pipe contained coffee grounds and approximately 530 grams of black tar heroin. The value of the heroin was around $70,000, a statement said.

Investigators located one balloon of heroin, as well as drug records and drug paraphernalia used in the distribution of heroin inside the home.

Obama warns Congress not to stand in way of Iran deal