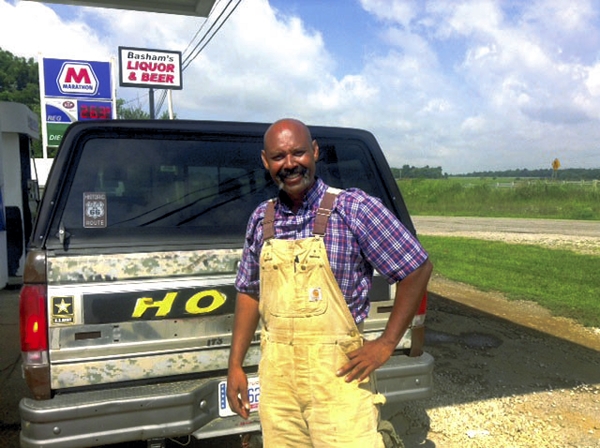 Freeze stopped at a convenience store near Fort Knox. Al Todd, a retired Army veteran from Vine Grove, Kentucky, asked about Freeze's ride. He is a marathoner and triathlete.

After last night’s adventure at the Breckinridge Inn in Hardinsburg, Ky., I woke up this morning not sure of the time. When I got the room last night, the alarm clock was set an hour ahead of my watch. I didn’t think much of it and reset the clock to the correct time. Rolling out of bed at 5 a.m. felt like the other days, but the TV station said it was an hour later. Can’t be, I thought, it is still mostly dark. There was severe weather around again that caused more major flooding, but nothing fell on me as I hit the road.
My plan was to head toward Louisville, and when I got close to Fort Knox, see if it was worth the time to visit Patton’s Museum. Most of the first 10 miles had good shoulders on the road and good pavement, too. I pulled into Irvington, and got my two egg and cheese biscuits. I asked a local what time it was, and he agreed with my watch. He added, “But you will see a sign right down the road here that tells about the time change back to Eastern.” I guess the folks back in Hardinsburg had set the clock to Louisville time. Anyway, I am back on Eastern time for the rest of the trip.
I got to the outer reaches of Fort Knox and started to see quite a few military vehicles and soldiers. A large group of them had stopped in a convenience store where I asked about the museum. The folks there thought the museum was not open on Sundays, so I bypassed it with the promise to visit later.
Al Todd, a retired Army veteran, came over and invited me to stay with him if I ever came this way again. Al is a marathoner and triathlete who used to live in California. “No more — we don’t even like to visit out there now. Home is here in Kentucky,” he said.
I turned onto Highway 31W to make the final push toward Louisville and then Indiana. It was a ride that certainly had more downhills than ups and very good shoulders. I passed through Muldraugh, the closest town to Fort Knox. It was alive and bustling with lots of motels, car rentals and convenience stores, along with plenty of traffic.
On to West Point, where the largest earthen Civil War fort had been built by William Tecumseh Sherman and President Lincoln. I stopped to see it and was amazed how hard the walk was up to the site. It is easy to see why Fort Duffield was never attacked. It looks out over the Salt River and the Ohio River and certainly looked impenetrable to me.
Back on 31W, I headed into Louisville. As I neared the bypass, the traffic became horrendous. Much of it left us there, and I headed on into town. I was told three times to not stop when I neared the south side of town. That area was dirty and not well kept, much different than when I neared the downtown. I had spent a few days here on several previous occasions, but had never seen the other part of the city.
I crossed the Second Street Bridge and passed into Indiana. I didn’t see a sign, but that has been common when I entered new states on other bridges. Hopefully, I can get a photo later. Tonight, I have a room in Clarksville and will head northeast from here tomorrow.
As I continue northward, the Underground Railroad history will become more prevalent. Kentucky contained fewer slaves than other Southern states and was generally considered to have treated them better for two reasons. Farms were smaller and the growing season was shorter. But for those slaves working in the Bluegrass State, they were constantly reminded of their proximity to the free states just to the north. Illinois, Indiana and Ohio had large communities willing to work to set the slaves free. I will have more chances to see some of this history as I continue north.
Today, after 72 miles, I am within sight of the halfway point of this adventure. That halfway point is also timely. The return flight from Toronto is now scheduled for Aug. 5.
A couple of unusual things for today. I passed through Meade County, Ky., the home of Pee Wee Reese. Al Todd had not heard of the Brooklyn Dodger shortstop and broadcaster. The other thing is that I have never seen so many butterflies. They seemed to be everywhere on the ride today.
With that, I will close for tonight and be back with another report tomorrow. Thanks again for riding along!

SALISBURY — To avoid paying admission to the Rowan County Fair, Hubert Ritchie always went to the back entrance where the livestock... read more