David Freeze: Rumble strips, a memory and a stroke of luck 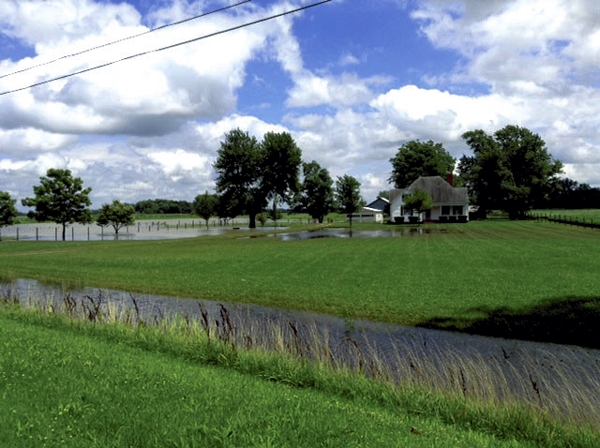 David Freeze / For the Salisbury Post As Freeze rode into Henderson, Kentucky, he noticed a lot of flooding in the area. This front yard and side pasture fence were all under water. Lots of corn in this area is flooded as well.

I spent the night in Eddyville, Kentucky at the Regency Inn. If you ever get over this way, possibly visiting the wonderful Land Between the Lakes, stay with them. It is the best motel that I have used on this trip. A fantastic price and plenty for it.
My local experts thought that I could travel north on Highway 641 without rumble strips. I spent about 20 miles on the road and then 50 or so on Highway 60. Rumble strips the whole way, except through the few towns. I went through Fredonia, where I found myself on the Trail of Tears, then Crayne and on into Marion. The government removed some 17,000 Cherokees from four eastern states and sent them on a forced march to Oklahoma. An estimated total of 3,000 to 4,000 Cherokees either died along the way or shortly after.
Marion, Kentucky has a warm place in my heart. I actually spent the night there in July, 2013, as part of my cross country cycling trip. The pastor left me alone inside the huge church all night and I had the best sleep of probably the whole journey. So, this is where my cross country and south to north journeys intersect. I even rode around just a little bit to make sure the memories were right. I noticed on the sign out front that the pastor is not there anymore or I probably would have stopped in.
I was a little wary of following Highway 60 for so many miles, but it actually turned out pretty well. The bone- jarring rumble strips were early on when there was little traffic and I could safely ride in the lane. The flatter and older rumble strips came later when traffic was much heavier. All day, every single driver gave me room and only one horn. That driver had plenty of room too, so she must have been doing her early morning horn check.
Next towns up were Sullivan and then Sturgis. I laughed that my friend Mike Wright and his buddies had been going to another Sturgis, theirs in South Dakota. I saw a big sign that says that Sturgis, Kentucky also hosts a big motorcycle rally.
Then, I rode through Morganfield and Corydon, then finally into Henderson. I already have had an experience here that bears retelling. Most of it might have to wait for the next book, but here is basic telling. I called the place that I planned to stay, but found out that it was full. After asking two guys at a gas station, I stopped at the first place they knew about. Suffice it to say that the price was good, but the place was was totally unacceptable. Believe it or not, I was told to get off the property and not come back on my next time through. My next stop was the Welcome Center for Henderson, where I met Jessica Mitchell, Henderson County’s marketing director. She was fantastic and gave me some insight on where I might find a good room for a fair price.
I left Jessica on the way to the Super Eight, but somehow missed it. In the meantime, I happened to ride by the Downtown Motel and got a great room for a very fair price. There is much, much more to the story, but I promise to explain it all in the next book. It might be as good as the “night in New Jersey” from last year’s ride.
After 79 miles today through some thriving agricultural land, I ended up OK here in Henderson. Henderson, Kentucky is on the banks of the beautiful Ohio River and the naturalist, John James Audobon, once called it home. In 1901, the Great Sleet fell for three weeks in February, requiring horses to have special shoes.
Speaking of weather, I saw some amazing flooding today as I rode into Henderson. Yards and fields were totally flooded, and just a few minutes ago, I heard that the areas around Sturgis were getting more rain.
Tomorrow, I will head over to Owensboro, Kentucky, again on Highway 60, and then a little farther north in the afternoon. I just wish I could ship some of this rain and slightly cooler temperatures back to Rowan County. I will be back with more tomorrow.