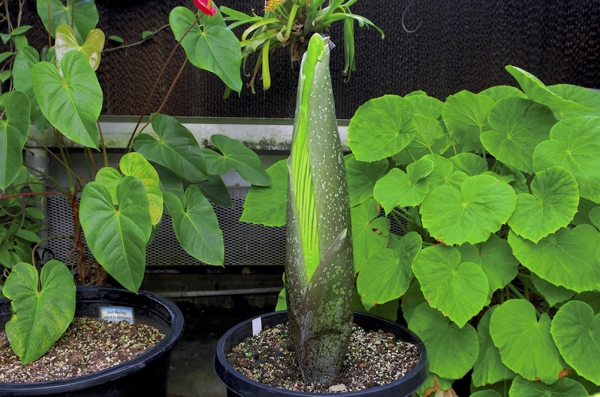 UNC-Charlotte The so-called corpse flower at UNCC is about to bloom. The rare bloom will last just 12-24 hours.

One of University of North Carolina at Charlotte’s Titan Arums or “corpse flowers” is preparing to bloom in the next seven to 10 days.

“Amorphophallus titanum or the Titan Arum, which is native to Sumatra, is considered one of the ‘rock stars of the plant world,’ ” said Paula Gross, interim director of the UNC Charlotte Botanical Gardens.

The yet to be named flower is one of two Titan Arums the Botanical Gardens purchased from California in 2008; at that time, the plants were roughly five years old.

In 2007, Bella, the University’s initial Titan Arum bloomed, a first for the Carolinas. The plant is known not only for the size of its bloom but its odious smell that has been described as rotting flesh. Bella bloomed a second time in 2010 before it expired.

“In captivity, Titan Arums usually bloom two or three times, and this bloom will definitely attract lots of people to the Botanical Gardens as it did with Bella,” Gross stated.

When it will actually bloom is a mystery, but Gross said when it does, the window to experience it is small, usually only 12 to 24 hours. Cultivating the plant in captivity requires proper care and attention to temperature, humidity, fertilization and water.

The Botanical Gardens is holding a Facebook contest to name the budding Titan; if an entry is selected, the individual who submitted the name could win a trio of autographed books (“Bizarre Botanicals,” “Native Plants of the Southeast” and “The Truth about Organic Gardening”).