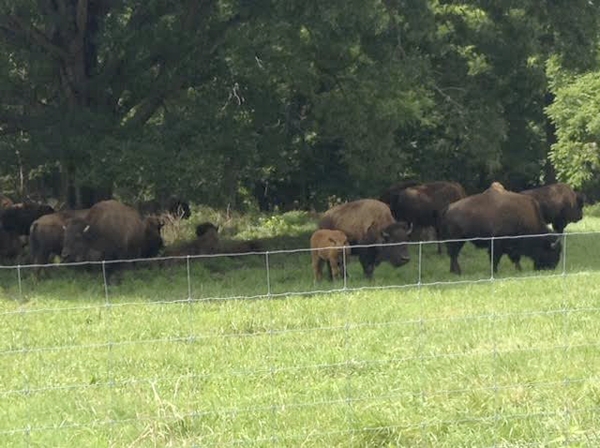 I had never seen bison so close as I did today in the Land Between the Lakes. David Freeze/For the Salisbury Post

I knew last night from my reading that today would be unusual. What I didn’t know was that some things wouldn’t develop as I had anticipated and that I would end up tonight in a town that I hadn’t even considered.

Right now, I am in Eddyville, Kentucky, after 63 miles and one of the most interesting and productive days of the trip so far — and also one of the most unusual endings. As I write this, I have already eaten about 5 servings of watermelon and 2 cups of yogurt, and drank plenty of water and some Diet Snapple.

After planning way later than I should have last night, I knew that the focus of the day would be a ride through the Land Between the Lakes, the area between Lake Barkley and Kentucky Lake. Just as I took off this morning, I stopped to buy my egg and cheese biscuit for later. After the climb up the first hill, I decided that there was no need to save it. After the biscuit, I spotted my first non-decomposed armadillo. He was lying feet-up on top of the first hill going into Land Between the Lakes. I think the climbing just did him in.

The first thing I spotted was an old iron furnace of the type used in this area around 1850. It was 40 feet tall and operated with slave labor. Pig iron production was especially profitable here for a time, but eventually played out. On a little farther was the first “bison prairie,” and I hoped to see some after being mostly disappointed at Yellowstone a couple of years ago. There were two good-sized herds near the road, and they seemed to not mind having their pictures taken. Immediately, I thought that this would be a good day even if I didn’t make many miles.

Next, I stopped at the Homeplace, an actual working farm from the 1850s. I couldn’t believe it didn’t open until 10 a.m., leaving me about 90 minutes to wait. Not being a patient person, I decided to take my camera and climb around the gate. Jonathan Ferrell, one of the farm’s volunteers caught me. He politely told me that I had to leave, but with a great explanation of what the farm is all about. I went back out front and realized that this was something that I couldn’t miss. So, patiently I waited. During this time, I met Ricky and Rhonda O’Kelley from Pensacola, Florida. They were on vacation. We talked about lots of things, including the fact that they knew someone who had worked at Bernhardt’s Hardware for many years.

Finally, I got in and watched a 15-minute documentary about the actual farm on display and how it came to be. I hope to do a complete feature on this farm later, mostly because I am excited about all I learned. I saw Jonathan again, and we were both glad that I stayed to tour the farm. We talked Iron and Clay Peas, Reid’s Yellow Dent Corn and more. I was amazed to watch this man use a scythe so easily. There were about 15 buildings on the farm, and there is a great story of how they all were assembled at this one site. Hopefully, I can do more on this farm when I get home.

I was way behind by the time I got back on my bike. Then as I started out, I ran into another paving operation. They had just this morning paved one side of the road, and were now returning on the other side. The sticky tar was on the side ahead of the pavers and I couldn’t get out of it unless I rode on the wrong side of the road facing traffic. That is just what I did. I only had to seriously dodge one dump truck and a car that was going too fast anyway.

Finally out of that, the sun was bearing down and the temperature was pretty hot. I stopped at the Welcome Center within the Land Between the Lakes to see if they had any idea of a safe Kentucky road heading north for cyclists. Kentucky roads are notorious for rumble strips and I got a small taste of them today. However, the paving company was not putting them back. A huge improvement, in my opinion.

The Welcome Center suggested that I stop at the Welcome Center in Grand Rivers, the first real town coming up for help. I stopped to ask for directions to the Welcome Center and was reminded that there was a good bike shop in town. I had read it myself, and quickly realized that the best way to figure out tomorrow’s route would be with their help. Nathan and Abby Hill took care of me as soon as I walked in the door at Wood-n-Wave Bike Shop. I told Nathan about some options that I was considering, and he came up with a better one. Because of him, I have a great room in Eddyville, Kentucky tonight. By the way, Mississippi is getting pounded by rain this afternoon. None here yet.

So, with that all said. Things didn’t work out just like I planned, but they still worked out very well. I will head for northern Kentucky over the next couple of days and consider a couple of ideas that readers have given me.

Time for a second round of eating. So far, watermelon and yogurt have been my staples on this trip, not ice cream and Reese’s as in the past. Also, I have not been truly happy with Sav-a-Lot and Piggly Wiggly grocery stores, but my old friend, the Giant Food Store, has appeared again here in Eddyville.

If all goes well, I will complete the first 40 percent of the Alabama to Canada adventure by Saturday. I hope for a lot more rewarding days like today. See you tomorrow!