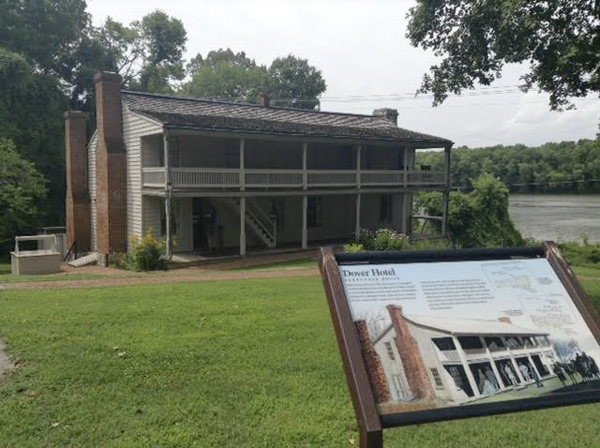 In this house, General Grant accepted the surrender of 9,000 Confederate soldiers from Fort Donelson. Many historians believe that this was the first major defeat for the South and hastened the downfall of the Confederacy. David Freeze/For the Salisbury Post Janet Wickers, left, and Haleigh Shepherd were fun to talk with at the Fort Donelson Battlefield Visitor Center. David Freeze/For the Salisbury Post

Just a few minutes ago, we took a much needed shower. You probably thought I was out here riding every day by myself. Technically I am, but a pair of bike shorts, a yellow T-shirt, and two socks that nobody could stand to be close to finally got some attention. They are now all drying in the late afternoon sun while I type out this update in my underwear. Since the readers and I have been riding together for 10 days, we have fewer secrets to share than before the ride.

The rain ended overnight and heavy clouds greeted me this morning in Camden, Tennessee. I went to the continental breakfast that really wasn’t at the Country Hearth Inn just before heading north on Highway 431 toward Paris. My first 20 miles were timely, then I made a right turn into a long stretch of hill after hill — none too steep but often as long as a mile. Next I headed northeast on Highway 79, completing a morning’s ride on very safe and wide shoulders. I crossed the Tennessee River at one of its widest points, more than a mile and a half wide. That crossing resulted in a quad busting incline of almost 2 miles before heading into Dover, my intended destination for the day.

I knew it would be a short day mileage-wise, but the workout was plenty tough. I reached Dover during the midday and stopped at a McDonald’s. While there, I met Jim Bundy, a pharmacist working in town. He saw me studying my maps, and that prompted a really nice conversation that included a recap of him dancing on the Kelly Ripa and Michael Strahan show. When Jim left, another couple, who own a carnival company, took up the conversation. We talked about all the recent rain and how they often pick up hitchhikers as they move from city to city. The point was that we both get to meet a lot of interesting people.

Then it was on to tour the Fort Donelson National Battlefield. I got wonderful help from Janet Wickers and Haleigh Shepherd in the Visitor Center. I watched their documentary about the battle, most of the facts already known to me. The loss of Fort Donelson eventually allowed General Grant to send gunboats and troop reinforcements to turn the tide at the Battle of Shiloh. Especially interesting was the story of how the two commanding generals slipped away before the rest of the garrison surrendered, totaling about 9,000 Confederate soldiers.

Even more interesting to me was something that I discovered in the museum at the battlefield site. A journalist named Junius Brown was employed by the New York Tribune as a war correspondent. He covered the battle at Fort Donelson, but was eventually captured and sent to the Salisbury Prison for 20 months before escaping.

Tomorrow has something special for me to pedal into. I will enter the Land Between the Lakes, a National Recreation Area. I will head north into 170,000 acres of forests and open lands that includes 500 miles of trails and 300 miles of shoreline on Lake Barkley and Kentucky Lake. There are buffalo and elk preserves and a working 1850s farm. It appears to be about 50 miles on a road called the Trace Road that I will follow for most of the day as I pass into Kentucky.

There is no threat of rain today for the first time since this ride has begun. The bad thing is that the heat is building. The western Tennessee and Kentucky areas are projected to have highs in the mid-90s for the next several days. Good thing that my riding clothes took a shower.

A few timely things concerning the Underground Railroad were found today. Dover was another site of a “contraband camp,” a refuge for runaway slaves. At this point, Lincoln had not issued the Emancipation Proclamation, but Union generals would not send the slaves back south.

My total was only 54 miles today. I will be happy with a similar total tomorrow as there is much more climbing to do.

One little tidbit that some of you might find interesting: I never close and lock my motel door when I leave in the early mornings. A couple of times over the years, I have had to return after having trouble, and a door not latched is the quickest way to get in. No one else is up anyway.

Thanks for riding along. See you tomorrow!