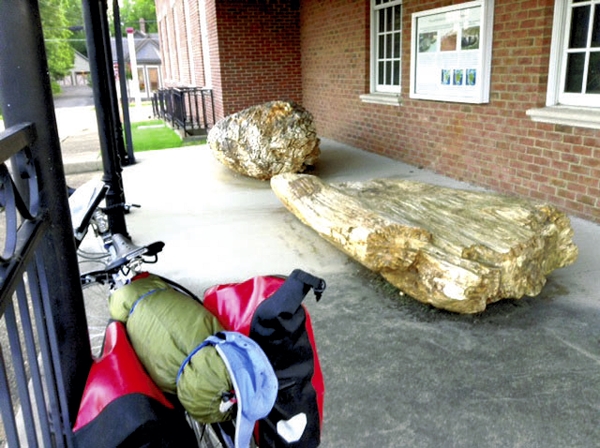 This petrified wood was on display at the Tennessee River Museum in Savannah, Tennessee.

All day, the clouds have been building with the forecast calling for heavy rain and storms. I had started the day with a lot of uncertainty anyway because I was not sure of the best route from Savannah, Tennessee, northward. I realized last night that I was close to the Underground Railroad route even though I had been freelancing yesterday. I searched last night for a suitable way to link back up without wasting much time. Also, I saw quickly that the intensity of the climbing would build over the next two days. Much of my route would be in the area of the Tennessee River.

Within the first hour, I was going up and down the hills overlooking the river. The views of the river were spectacular. I saw my first deer and had six encounters with dogs. Most ran after me but turned away when I shouted back. Only one got really close and I suspect that he was performing for his buddies.
I made it to Saltillo, the first town of the day, and met Anthony Bridges and Jerry Finley. Both were watching traffic go by as I pulled into Willie’s One Stop to get my egg and cheese biscuit. We had a nice conversation, agreeing that there are still lots of good Americans out there. Anthony saw a town employee go by on a mower and said, “Yes, they keep the roads mowed real well here!” Anthony and Jerry gave me tips on directions and off I went. Good guys, the kind that I love to meet across America.
I rode toward Montgomery on state roads 202 and 69, most of it very scenic and serene. On to Decatur, still on the same roads, where my indecision came to a head. If I went north, I had a place to stay overnight should the storms develop. I would again be off the official Underground route, but nothing noteworthy was coming up soon anyway.
After asking two locals for their thoughts, I got nothing. If I followed the route, there would be would be a much greater chance that I would be caught in the storms. No motels were showing on the Underground route for at least 65 more miles and these would be tough miles, extremely hilly. I am now approaching an elevation of 700 feet on the bigger climbs, but often dropping to levels around 400 feet before climbing again.
I chose to stay north and go to Parsons, which would allow more options. In Parsons, I checked my iPad for routes and still didn’t have a clear answer. Until I met Dexter Rainey, a telephone repairman for TDS and a cyclist himself. I saw him outside a florist’s shop and asked his opinion. Dexter advised against using the Underground route because it has unsafe roadsides with no shoulders and lots of gravel trucks. He advised heading north and remaining on SR 69. Dexter said that he would love to eventually travel by bike. He was great and saved my afternoon.
SR 69 North was the best road that I have been on since this adventure started. The bike path was as wide as a regular car lane and made my riding much easier. Other traffic was not heavy and there were no safety issues because I had plenty of room.
Now in a motel room in Camden, Tennessee, with lots of storms in the area, I will be safe for the night. Since 5 p.m., it has already poured twice with plenty of lightning and thunder. My ride was 75 miles, but I had earlier thought it might be much less. Thanks to Dexter, I am about 25 miles ahead of where I would have stopped without his input.
Camden was once a stop on the Memphis-Nashville stagecoach line. There was a Revolutionary War battle near here. It will be my jumping off point for another day heading north in Tennessee tomorrow.
My final thoughts on Mississippi were also good. Very friendly and helpful people were everywhere. Just like Alabama, most people seem to be smiling. drivers courteous and proud of their state. Some roads have those dreaded rumble strips, but traffic was light enough that it didn’t matter. The visit to Elvis Presley’s birthplace was the highlight for me.
I’m really enjoying hearing from the readers about my ride and the things I have seen or might see. Your suggestions are greatly appreciated.
I will join you again tomorrow.

Municipal races in Rowan got off to brisk start Monday, with 16 total people filing for positions across the county... read more