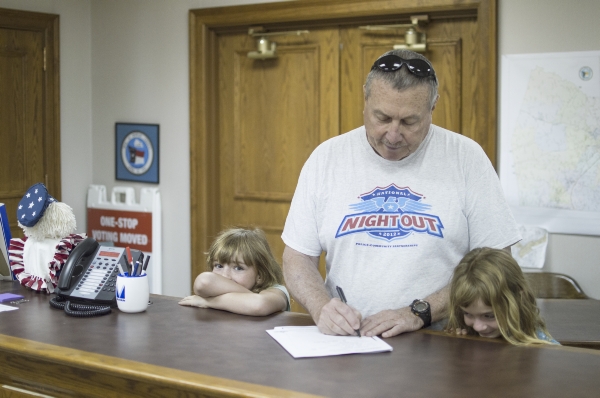 Josh Bergeron / Salisbury Post - Landis Board of Aldermen Candidate Tony Hilton files for the 2015 race with his two granddaughters Monday at the Rowan County board of Elections. Hilton is currently on the board.

Municipal races in Rowan got off to brisk start Monday, with 16 total people filing for positions across the county and others announcing their intent not to seek re-election.

Monday was the first day of a two-week filing period. Filing began at 8 a.m. and will end on July 17 at noon.

Salisbury’s City Council race may have the potential for the most turnover. As of Monday, Maggie Blackwell and Pete Kennedy had confirmed their intent not to seek re-election. In the race, only two people filed for election on Monday.

“Public service has afforded me many opportunities, and it has been a privilege to serve the citizens of Salisbury,” Blackwell said in a Facebook post. “My health is wonderful and my husband is, and has always been, immensely supportive. I am choosing to take some personal time, have evenings at home, and enjoy our (finally) empty nest. I offer to you my heartfelt thanks for the opportunity to serve – and don’t count me out! I may be back in the future!”

Bank Executive Mark Lewis, who filed for the Salisbury board Monday afternoon, served on the council from 2003 to 2009. In an emailed statement, Lewis listed three priorities if elected: developing a plan for pedestrian-friendly, downtown streets; a renewed commitment to the city’s Customer Service Initiative and attracting companies to Salisbury by marketing the city’s fiber optic network — Fibrant.

Local Attorney Todd Paris also filed for Salisbury City Council. Paris previously ran for district court judge, but was unsuccessful. He founded and served as a leader of the political group La Resistance, which actively lobbied against former County Commissioners Chairman Jim Sides in the 2014 election season. Paris did not immediately respond to a request for his top priorities.

The largest number of candidates who filed for election Monday were from Spencer. Current Mayor Pro Tempore Jim Gobbel and Spencer Resident Bob Oswald filed to run for mayor.

James Michael Boone, Sylvia Chillcott and David Lamanno filed for a spot on the Spencer Board of Aldermen.

“I just think its time for me to take a step back” Everhart said. “It’s time for someone else to move the town forward.”

Everhart didn’t rule out the possibility of running for the town board or mayor at some point in the future. However, Everhart said he’d like to spend more time with his family and grandchildren.

In total, he has served close to 30 years on the Spencer Town Board in some capacity.

Landis was second in the total number of people who filed for election to the town’s governing body.

Former Landis Mayor Dennis Brown filed to take his spot back. He lost by a razor thin margin of two votes to James Furr in the previous mayoral election. Brown served as mayor from 2008 to 2012 and is a retired firefighter.

Others who filed for election on Monday include:

• Jim LaFevers, who filed for re-election to the Granite Quarry Board of Aldermen

LaFevers is the current Mayor Pro Tempore of Granite Quarry

• Bill Feather, who filed for re-election as Granite Quarry’s mayor

• Ryan Dayvault, who filed for re-election to the Kannapolis City Council

• Roger Haas, who filed for re-election to Kannapolis City Council

• Danny Gabriel, who filed for re-election as Cleveland mayor

• Steve Stroud, who filed for re-election to the China Grove Town council