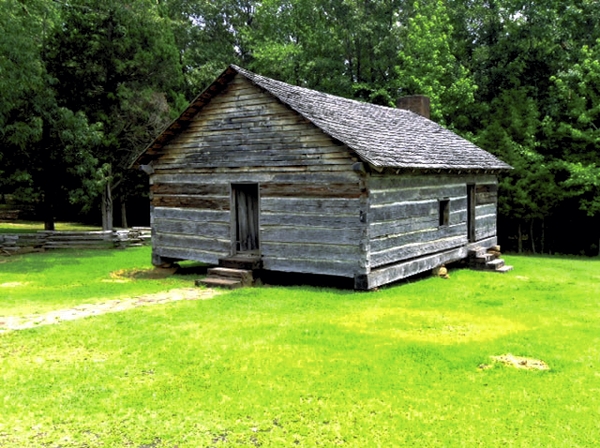 The original church built on this site was the center of the 1862 Civil War battle that was the most deadly that North America had ever seen. It is called the Shiloh Mission Church. This church was built in 1871. Photo by David Freeze, for the Salisbury Post.

Up and out early this morning from Booneville, Mississippi, I actually felt a little cool to start with. It didn’t last for long though as a humid morning turned sunny a little later.

I noticed two things on the early ride in Booneville. FM Banks are here, very close in name to our local F&M. Also, the Super Eight Motel is now advertising a fitness room. Usually, I would be all for that but not on this trip. When my socks are finally off at the end of the day, I won’t be heading for another workout.

One of the things that I like to do in the morning is to find an egg and cheese biscuit at a convenience store. Here are a few tips. Any one that has a sign for Hunt’s Pizza is probably going to have good egg biscuits, too. This morning, I spotted a convenience store that advertised deli-made breakfast biscuits from 5 to 9 a.m. I stopped and was told that she only had one biscuit left at 7 a.m. and they couldn’t make more. What happened to the deli? It wasn’t what I wanted, so off I went down the road. The next one had the Hunt’s sign proudly posted. I stopped in and got two biscuits made and in my hands within 30 seconds. The parking lot was full of other people doing the same.

On toward Corinth, I rode with plans to bypass it and head immediately for the Shiloh Battlefield. I stopped at the Welcome Center and Sherry Brown and Nancy Carter talked me into doing the whole Civil War experience that included the battlefield in Corinth first before heading on to Shiloh. What hooked me is when Sherry said, “You will be riding the same route that the soldiers marched to battle.”

I rode down to the Corinth site and toured it’s Interpretive Center. They had great stuff including a saddle, boots, and much more that belonged to the actual hero of the battle. I also learned about the hardships from having huge armies of men in the town on two occasions. The worst may have been when many of the wounded from the April, 1862 Shiloh battle were brought to town for treatment. They filled nearly every house as people from across the South came to treat them. Thousands of wounded soldiers ended up in a small town with only 1,000 residents. At war’s end, only 100 residents remained.

Another very interesting thing is that up to 4,000 escaped slaves descended on the town when it was under Union occupation. Residents and others helped to set up what was called a “contraband camp.” The slaves learned to read and write from missionaries and as many as 1,500 enlisted in the Union Army.

During this time, drinkable water was in such sort supply that the death rate from disease skyrocketed. Men had to drink water that horses wouldn’t.
I hopped on the bike and rode the 22 miles into Tennessee and on to Pittsburg Landing, the site of the Shiloh National Battlefield. It is a beautiful site now, but at one time, the soldiers on both sides were shocked at the brutality of the “modern battle.” There are 13 miles of roads within the park, and plenty to see. I had read two books entirely about this battle, which is labeled as one of the most misunderstood from the Civil War. The Confederate Army surprised the Union forces and won a clear victory on the first day, but then withdrew and allowed U.S. Grant to bring in reinforcements by steamboat overnight. These men turned the tide on the second day and the Confederates withdrew on the second day, having lost the ground that they had gained. This battle and the following Corinth battle were fought over control of the railroad lines that brought supplies from the Deep South to the Confederate Army. The Union forces gained control of the railroads.

On a side note, I fell asleep while watching an hour long film in the visitor center. I did see most of the movie, but awoke ready to nap some more, not ride a bike for another 15 miles. Eventually, I got my legs back going again and found my way to Savannah, Tennessee, a very nice town that was Grant’s headquarters just before the battle of Shiloh.
Currently, Savannah proudly claims itself to be the Catfish Capital of the World. Over the last three years, I have been in the Jackalope, Prairie Chicken, and Catfish Capitals of the World! Who can to ask for more?

I need to answer a question that I have received several times over the last few days. What do I do to pass the time on the bike? I sing, do math problems, and think about a lot of things. My singing yesterday included a lot of hymns. I don’t listen to anything because I want to hear what is happening around me. The hours in the saddle do get long at times.

With only 57 miles today, I had a short day on mileage but learned a lot. At this point, I have no idea where I will be headed tomorrow. Once this update is submitted, I will work on tomorrow’s route.

My books are still available at the Literary Bookpost, Patterson Farm Market and Skinny Wheels Bike Shop, as well as Amazon and Barnes and Noble.
It was another good day, and I am already excited about tomorrow!

100 wedding cupcakes: A big order for a reporter