David Freeze: Out of Alabama, into Mississippi 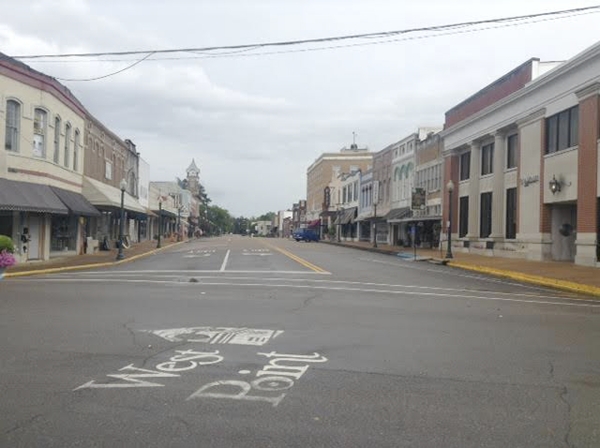 After huge storms overnight, I checked the weather first thing Saturday and found plenty of storms around again. None were near Tuscaloosa, but the skies were threatening. I headed out to ride west toward Columbus, Mississippi, but took a route to ride through more of the University of Alabama campus. One last goodbye to the Bryant-Denny stadium, and I was back on Highway 82 on my way out of town. Just as I made the turn west, the skies opened up.

Riding in the rain is fine on the bike, especially if there is not much traffic to worry about, as was the case this morning. My plan was to ride to Columbus and spend the night, especially if I could get in ahead of more predicted storms. I had little interaction with anyone as I rode on. I felt less energetic this morning for some reason, even though the was no real reason for it. I passed through Gordo and Reform, looking for any signs of a Fourth of July Celebration. The rain would have probably messed it up, anyway.

Up and down the hills I rode while slowly knocking off the miles. My big motivator was the Mississippi sign, and I got it about 55 miles into my day. It is a big, beautiful sign, welcoming everyone to the “birthplace of America’s music.”

I rode into Columbus on 82 amidst the heaviest traffic that I had seen all day. It was time to get off the highway. I asked a produce salesman for the best way to head to West Point, my new destination for the night. It looked to be a little more than 15 miles farther north. I got a peach but no picture because the salesman didn’t want his name or picture used. Once in a while, I get that. I did get the free peach and wonderful directions because, I think, he felt bad. Around Columbus I went and headed north on state road 50. Columbus annually hosts the Juneteenth Festival, a celebration commemorating the end of slavery.

About this time, my energy kicked in. It was a pleasant trip toward West Point that included a ride over one of the biggest rivers in the south, the Tombigbee. It was flooded when I saw it and had plenty of debris floating in the water. There was some river traffic as well. Spanish explorer Hernando de Soto probably camped next to the river in 1540. Recent explorations have been trying to locate the campsite.

On into West Point on a narrow and bumpy road, I found a beautiful little town that is picturesque in many areas. The area is also famous for a Civil War battle where Confederate Gen. Nathan Bedford Forrest defeated William T. Sherman with a force that numbered about a third of the Union troops. The 1864 battle raised southern spirits after a series of defeats.

Tomorrow, I will head in some manner toward Fulton and Tupelo, Mississippi. I will plan the routes later tonight. I look forward to visiting Elvis Presley’s birthplace. I actually have a life-size Elvis who greets visitors at the front door of my house. Previous wives were required to be Elvis fans.

It was with sadness that I left Alabama. I am often asked which states would I live in other than North Carolina. The only one was Virginia through the first two rides. Now, I think Alabama is at least in a tie with Virginia. Good people, always very polite and just a pleasure to talk to. They were so helpful, but fun, too. I loved the state’s history and it’s roads. Alabama is so similar to North Carolina, and several people mentioned that over the 5 days that I visited. I did get a horn this morning from a motorist, but it was probably because I went around an intersection. I rode behind the line of traffic waiting to go and then back onto the main road. I have done better with these things so far on this trip. Otherwise, I found Alabama to have the most courteous drivers I have ever encountered.

Today, I was reminded of some things learned in the past rides. If there is a railroad track beside my route, then it is going to be flat for at least a while. If I reach the top of a hill and there are big electrical towers or a cellphone tower, then it is most likely going to the highest point, and the will be some downhill soon. Both of those happened today.

Thanks for following my ride. All is well so far as tomorrow completes the first full week from Mobile to Canada. So far, this ride has been an adventure a day. I am hoping for plenty more.