David Freeze: Yes, it is all uphill 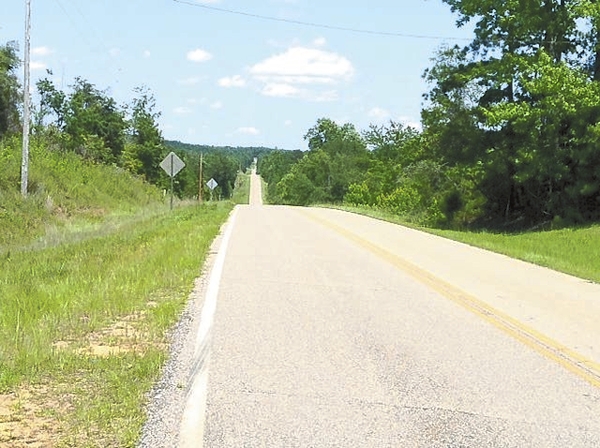 David Freeze/For the Salisbury Post This photo shows an example of Wednesday’s hills, There are four in the picture. Just making it to the top of one was a reward until Freeze saw the next one.

The most common reply to my plan to ride from Mobile to Canada has been: “But that is all uphill!”

Today, you folks were right.

I started at 6:30 a.m. and followed the Adventure Cycling map for the Underground Railroad. I knew there would be hills and there were supposed to be more storms. What I didn’t know is that the map would send me south and west for no apparent reason, before sending me back north.
With that said, here is a recap of what happened.

I left Grove Hill, Ala., headed for Jackson by way of a bunch of country roads. I did see Alzestra Fuller at Jacob’s Well, another spring that was running beside the road. Ms. Fuller was there to get water and said people come from all around the area to fill up.

Then I saw a historical marker for the salt works that helped provide the South salt during the Civil War. Workers were exempt from military service. Salt sold for $10 to $40 a barrel.
I eventually got to Jackson and realized that I was now south of where I had started the morning. A very hilly and challenging ride to Coffeeville put me back east of Grove Hill and now headed directly north. I tried to find a better route to get to Linden, my planned overnight location, but realized that I needed to follow the Adventure Cycling route now, even though I would be climbing constantly.
I was now in for a very tough afternoon, one that could possibly end much later than I had hoped. With 54 miles to go through what I called the “Alabama Ozarks,” I said a few prayers. My pace had been slow all morning and the afternoon looked to be very similar. After leaving Coffeeville around 12:15 p.m., I headed for Campbell and Putnam.

Putnam had a convenience store and I needed it badly by that time. My first ice cream and a Diet Mountain Dew for caffeine, hit the spot. I kept riding most of the afternoon on State Road 69. It was a decent road that nobody used much. On average,  about a vehicle every two minutes came by.
Almost forgot that I met Dre Jackson in Putnam and he was a amazed by my ride. He said, “You ought to get a motor for that thing!” Dre had served in Jacksonville, N.C., and really liked Wilmington.
What earlier seemed nearly impossible to make it to Linden, Ala., by late afternoon now was looking good. I had picked up the pace and the hills were evening out some. But with just five miles to go, I had my first flat tire of the ride. Of course, it had to be the rear one and would take the longest to fix. After about 45 minutes, I was back on the road and made it to Linden just before 8 o’clock, with the sun setting and a storm chasing me into town.
So, I will spend the night in Linden and head north again tomorrow. My total for the day was 94.5 miles, a very long day considering that there was almost no flat ground. I have been dehydrated all day and looked forward to getting some watermelon and yogurt tonight at the local grocery store. The only grocery in town closed at 7 p.m., so I am now eating ice cream again and drinking everything I can to rehydrate myself.
Just a couple of things left over from yesterday. I stopped at the grocery in Grove Hill, called the Cash Saver. It was a large grocery store that sells everything for cost plus 10 percent. They had some fantastic buys. I hope to find another of one them later. Also, Cash Saver had Cheerwine.

The crickets, tree frogs or whatever else makes night time noise in Alabama, are very loud, so
loud that I can easily hear them in the motel room.
One word about another sponsor tonight. Eric at Skinny Wheels Bike Shop is the one stop for everything cycling in town. I now have bought both my Surly Long Haul Truckers from him.
Tomorrow, I hope to continue north to Aliceville, Ala. If all goes well, I will stop a little earlier than tonight. It should be my last full day in Alabama. Thanks to the guys at the Post for giving me extra time to get things in tonight.