Steve Bouser: ‘Get out of the water!’ 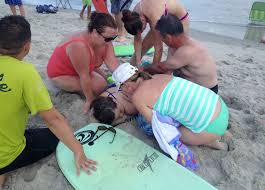 Steve Bouser, editor of the Salisbury Post from 1980 to 1993, wrote this column for The Pilot in Southern Pines a few days after sharks bit two swimmers off Oak Island on June 14.

As I write this on a blistering-hot Tuesday, I have taken refuge in the relatively cool shade under the Ocean Crest Pier on Oak Island.

Over the past 36 hours, I have often sought another kind of refuge — after finding myself in the middle of a crazy media storm that is the absolute last thing one would have expected from a supposed period of rest and relaxation.

It all began at 4:12 p.m. Sunday, the first full day of our beach vacation. Daughter Kate and her friend Amy were back at the rental house. Brenda and I were relaxing on beach chairs to the soothing rhythm of the waves.

Then, suddenly, it all turned into what Brenda later described as a scene straight out of “Jaws.”

We jumped up and saw someone helping a dazed and distressed girl out of the surf. She was bleeding ­alarmingly and was clearly in danger of going into shock. We didn’t need to hear the next shouted word — “shark!” — to know what had happened.

As I rushed over to where the 12-year-old was lying, the wound I saw was the stuff of nightmares; her left thigh had largely been scooped away with one powerful bite. Because of towels, I never saw her other terrible injury, which later necessitated the amputation of her left arm at the elbow.

Most of us swarming around in an effort to help were just getting in the way — until one bikini-clad woman, who turned out to be a paramedic, took charge. Soon she was barking out orders for emergency steps like the fashioning of makeshift tourniquets. I’m pretty sure the girl, Kiersten Yow, of Asheboro, owes her life to this guardian angel, whose name is Marie Hildreth.

Only after it became clear that there was nothing else I could do did the journalist in me instinctively take over, and I began discreetly snapping pictures of the scene with my iPhone. Only after we learned that there had been another shark attack a couple of hours later farther up the same beach did it occur that this was quite a story, and that my pictures might be of interest. I offered one to The Wilmington Star News and thought that was it.

But that front page picture, along with a story that included a few quotes from me about what we had witnessed, caught the attention of The Associated Press, and the rest is history. The news frenzy that followed shouldn’t have surprised me, since we talk about that kind of thing in journalism classes at Chapel Hill, but it did.

No sooner had I finished the interview with The AP than ABC News called. Then it was NBC. Then CNN. Then Fox. Then HLN. And so on, including People magazine Tuesday afternoon. And ­scattered in between, various other newspapers and TV stations rang. Some wanted just a phone interview, but I ended up heading back over to the attack scene maybe a half-dozen times to be interviewed on camera, sometimes live. One network wanted to drive me all the way to a studio in Wilmington, but I demurred.

At one point on Monday, I swear, I was talking to one network on my phone when Brenda handed me hers: another network. Then, as I switched from ear to ear, Kate hurried out with a third call. News people were Googling our unusual last name and calling whomever they came up with.

Though all this was undeniably exciting, it soon began to get old. I kept feeling guilty about how the whole thing was cutting into our quality time with visiting friends from Charleston. I also kept thinking (and sometimes saying), “Why me, for gosh sakes? I’m just an innocent bystander. Talk to those heroes who saved that poor girl’s life!”

At this writing, things are calming down. But the whole thing has left some lasting impressions. Mostly, it was quite a lesson in the dazzling speed and ­versatility and unending deadline ­competition that mark our modern news world. …

On a more human level, these two frightful shark attacks are also the ­second and third times in the past week that we’ve been reminded of the ­precarious and unpredictable nature of existence. The first was the death of a girl who fell from a zipline at Camp Cheerio in the mountains. That one ­especially affected Kate, who has worked as a counselor at that camp — and has slid down that zipline.

Life is full of surprises, isn’t it? It can change forever in a fleeting moment. Would that we didn’t sometimes have to learn that lesson in such terrible ways.