David Freeze: On the road again 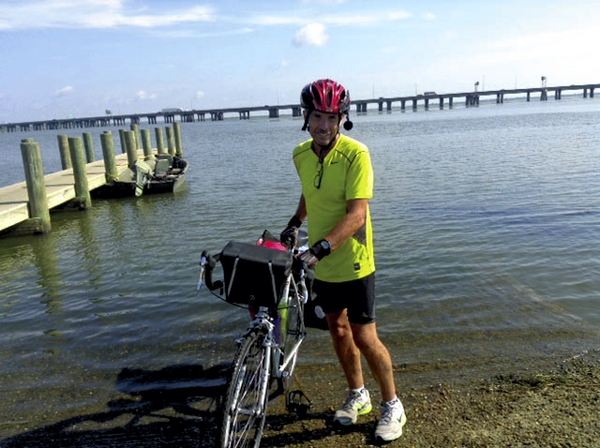 Dipping the wheel in Mobile Bay to officially start the trip.

After a very hectic and long day yesterday, I had trouble sleeping. Somehow, I failed to remember that Alabama is in the Central Time Zone. It seemed a good thing when I went to bed last night that I could sleep a little longer. It would have been nice, but 4 a.m. Eastern time was all I could do. I got up and finished packing the bike, then went in for the motel’s continental breakfast. It was late getting set up but finally I was back in the room, did my prayer for the start of the ride. I got on the bike and rode a couple of blocks, all the while hearing a clicking noise in the chain area. After returning back to the room, I analyzed the problem and searched out local bike shops. All of them were well away from my area and not open yet. After messing with it, I rode the bike in the parking lot and it seemed fine. I reloaded the bike and off I went.
First up, I wanted to ride by a few of the historic sites near my route. By making an early wrong turn, I found Fort Conde, a French fort built in 1723 to protect the then French Mobile. Best thing was that I found the big gates open and went in and looked around, snapping a few pictures along the way. Soon, I was quickly ushered out by a caretaker who said that the fort was not open yet.
Next, I rode around town and saw some of the historic homes in the area before going to Royal and St. Louis streets to start my map at the old slave market. Then it was a fun ride around the bridges of Mobile so that I could cross the bay and eventually head north.
There were some good views up on the bridges looking back toward Mobile. The first major attraction was the USS Alabama, the WWII battleship. There are dozens of planes and other military items on exhibit including a submarine. Many people who go for the first time stay most of the day. It will be on my list for my next trip to Mobile.
Very soon after leaving the battleship, I saw a boat access ramp to Mobile Bay and stopped to ask a fisherman to make my picture. He did and the trip now had an official start.
After crossing one more bridge, I left the bay behind as I headed for a sweaty climb into the town of Spanish Fort. Very quickly, the terrain became rolling. The temperature was really heating up too, so I had sweat dripping off my elbows a time or two.
My route at this time was Highway 225 through a couple of crossroads and then on Highway 138 into Bay Minette, where I am spending the night. I stopped early today at the last decent sized town that the map route passes for the next four days. My iPad had an issue that I needed to address plus I had to mail some items home already.
The biggest reason for stopping today’s ride early was to set me up for a longer ride tomorrow through more hills and lightly settled areas that will end in a town with a motel. There were storms today, but I was already off the bike by then. More storms are forecast with temperatures still not too bad.
Once again, I have a few sponsors who are helping out with the expenses for 35-day ride to Canada. One of those is Fowler Physical Therapy. They have kept me on the road with my running and other ventures for quite a while now. Fowler PT does not require a referral, so feel free to give them a call. I will mention other sponsors tomorrow.
I saw a sign offering alligator meat and alligator sausage today. I didn’t get any of course but never expected to see it for sale. There might be a few more surprises tomorrow. One good thing, the iPad is now working normally and I can send ride updates without WiFi if needed. Only 42 miles today and I am at Bay Minette. See you again tomorrow. 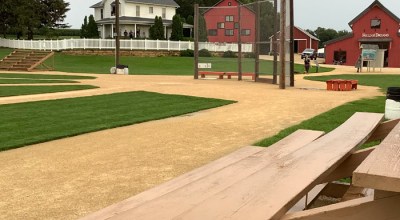