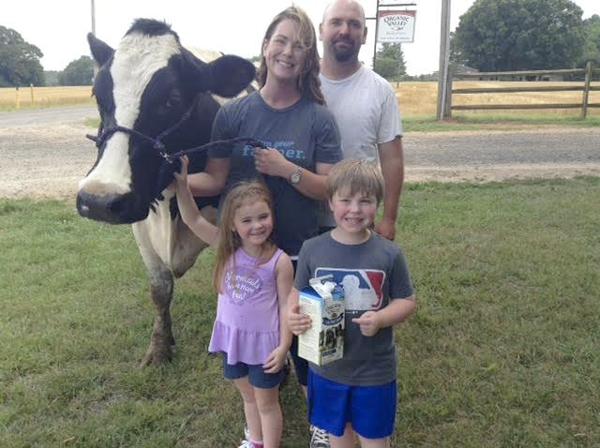 Ansley and Owen Hoffner, front row, with parents Tara and Chris Hoffner and their cow, Rosa, in front of the Organic Valley Sign. Owen points to the milk carton that features a photo of him and Tara are featured on. David Freeze/For the Salisbury Post

Chris and Alan Hoffner, owners of Hoffner Organic Farm, decided to stop using chemicals of any kind on their farm in February 2005. Their families are invested in organic farming and active in the farm life, as well. Since joining Organic Valley, a farmer owned co-op, those family members have often been part of the promotion efforts of the company.

Tara and Owen Hoffner have been recently featured on an Organic Valley milk carton, a first for the family. Tara is Chris’ wife, and Owen is their 6-year-old son. The milk carton, for their 1-percent lactose-free product, is sold locally at Harris Teeter. Also featured on the carton is a 12-year-old milk cow called Rosa and numbered 413.

While the family doesn’t usually drink lactose-free or 1-percent milk, Owen was born with intolerance for lactose and actually had to drink the product. Tara said,

“He drank the lactose free milk until he overcame his allergy and now is able to use all the Organic Valley products,” Tara said. “Owen prefers chocolate milk now.”

Though the pictures were professionally done, they are not staged.

“The photo on the carton was just one of a series that was taken when the photographer was here in 2014,” Tara said. “Owen and I were with Rosa in the pasture.”

Chris Hoffner, who runs the family dairy operation, said many of the reasons the three-generation family farm switched to all organic were economic.

“At a time, when lots of family farms were struggling, we knew we could get a stable price for our milk,” he said. “Knowing that we could count on a good and consistent price allowed us options that other dairies might not have. We were already doing many of the organic practices, anyway.”

“Organic farming is good for our animals as well. In a normal dairy operation, 5-year-old milk cows are unusual,” he said. “But here, we have several that are 12 and older. We don’t push them as hard, and we are fine with slightly lower production and a healthy cow. Our cows have less illness.”

Speaking of cows, Rosa is much more than just a dairy cow.

“She is a family pet, and loves being around people,” Chris said. “She moves at her own pace, often blocking the entryway for the other cows to the milk barn. Every time we have a tour here, Rosa wants to be in the middle of it.”

“Organic farming is good for the land as well,” said Alan, who is called Buddy by his friends and is Chris’ dad. “We want to build the soils, actually feed them. We add compost, cow and chicken manure and mulch to increase the organic matter in the soil.”

He also credited the improved soil for more moisture retention, especially significant during the recent dry spell. Alan, who manages the field work, added, “Our goal is sustainable farming,”

Because Organic Valley allows the farmers to have a say in the way the company is run, the Hoffner family likes the culture of the business.

“Each area has a farmer council and we have a representative on it. This gives us a say in what is going on,” Chris said. “Organic Valley is a large company that tends to be operated as a small company. Many of the staff are farm owners themselves.” One of those is CEO George Siemon, whose family has operated an organic farm in Wisconsin since 1977.

“As a farmer-owned cooperative, our farmers and their personal stories have always been front and center with Organic Valley. In 2010, we updated the packaging and replaced the wood-cut illustrations with individual photographs of farmers and their personal signatures. Also that year, we launched our ‘Who’s Your Farmer?’ feature on our website, where zip codes can be entered to locate the nearest Organic Valley farmer. Our lactose free milk and half and half were launched in 2013,” said Elizabeth Horton, whose marketing firm does work for Organic Valley.

Organic Valley is America’s largest cooperative of organic farmers and one of the nation’s leading organic brands. Organized in 1988, it represents 1,800 farmers in 36 states. Founded on its mission of saving family farms through organic farming, Organic Valley produces a variety of organic foods including milk, soy, cheese, butter, spreads, cream, eggs and produce which are sold in supermarkets, natural food stores and food cooperatives nationwide. With its regional model, milk is produced, bottled and marketed right in the region where it was farmed to ensure fewer miles from farm to table and to support local economies.

“Hoffner Dairy is one of our exemplary farm families in North Carolina,” said Josh Peters, creative director at Organic Valley. “Tara and Owen are everyday organic heroes because they help produce high-quality organic milk, care for their herd, and steward the land day after day. As a farmer-owned cooperative, our farmers really are the faces of Organic Valley.”

Owen and his 4-year-old sister Ansley are featured in the Organic Valley 2015 calendar. Both look totally happy to be seated in front of an old farm truck. Mom Tara said, “Our kids and the environment will benefit from our decision to farm organically, and we feel really good about that.”