David Freeze column: “Did you think he would ever be this good?” 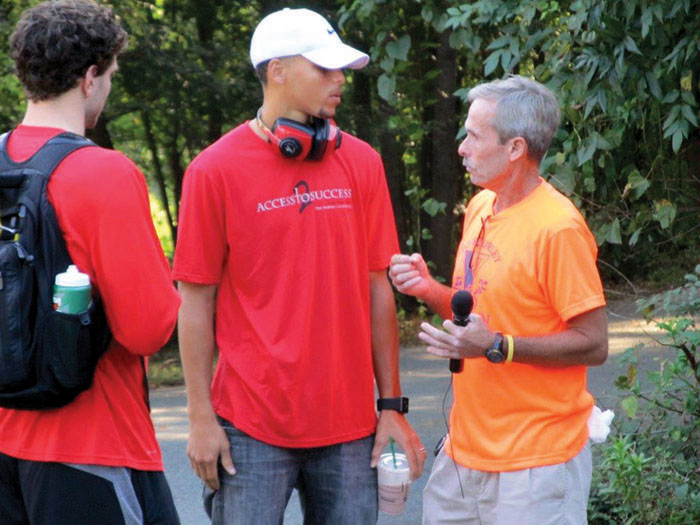 My Time with Stephen Curry

Back in early 2005, Davidson College basketball season ticket holders got the notification that former Charlotte Hornet Dell Curry’s son was one of the freshman recruits and would soon join the team. That was the first time that I had ever heard of Stephen Curry. Davidson wasn’t his first choice, which was understandable. His dad had played basketball at Virginia Tech and his mom had played volleyball there as well.

Davidson College had regularly won the Southern Conference title but had only occasional success on the national scene since the 1960s and the days of Lefty Driesell. Of course, we had no idea that the appearance of this very young and frail looking player would begin to change all that.

I started going to Davidson College basketball many years ago when a friend who worked at the college sometimes got tickets. Wildcat games were carried on WBT radio in Charlotte, so it was easy to keep up with the rest of them. Plus, Davidson was my first choice to attend college. It didn’t work out but I’ve long wondered how attending the small school just a half hour from home might have changed things. As a season ticket holder, I have seen lots of players come and go. Nothing prepared me for the emergence of Stephen Curry.

Curry was deemed too small for a major scholarship and in fact was offered only a chance to walk on at Virginia Tech. There is a long list of so-called experts who would regret that decision today.

When I first saw Curry, he looked about 14. But he had immediate impact on the team. He was surrounded by a fine group of players, always known for their intelligence, hustle and fine coaching. Davidson College, one of the smallest schools in NCAA Division 1, began a rise to national prominence that grabbed its fans first, but then very soon the college basketball world took special notice of this player and his team.

Good attendance at the John Belk Arena at Davidson, a fantastic basketball facility, was about 3,000 fans even though it would hold 5,500. Within about a year after Curry’s arrival, sellouts became commonplace. Everybody wanted to see the exciting player with incredible range on his 3-point shot. In my opinion, what set Curry apart from many of the other top college players was his enjoyment of the game and the ever-present smile. Curry clearly was happy to be playing basketball. One team actually put two defensive players on him for the entire game, leaving his teammates to play a four on three game.

We found out more about his family and the fact that they were all just good people. On most nights, at least several members of the “Steph” family were at the games. Dad, Dell, was often away while working as a commentator for the Bobcats and brother, Seth, was eventually playing at Liberty before his transfer to Duke. The most constant was Stephen’s mom, Sonya, and I think she enjoyed the games about as much as he did.

As play began in Stephen’s junior season, the team’s games were almost always sold out, both at home and on the road. Curry, now commonly referred to as the “baby-faced assassin,” eventually led the nation in scoring and his team went on an incredible winning streak that was finally broken against Kansas in an Elite-8 game of 2008. The team had beaten powerhouses like Georgetown and Wisconsin in thrilling fashion on the way to the Kansas game. Davidson lost by 59-57 when Jason Richards missed a shot at the buzzer. Kansas went on to win the NCAA Championship. Curry was double teamed and did his best to get the ball, but the basketball world will always wonder what would have happened if he been able to take “the shot.” It didn’t happen and Stephen Curry had played his last college game.

Davidson fans had their hearts broken when Curry left school at the end of his junior season to sign with the Golden State Warriors. I can remember that day along with the deaths of Elvis, John F. Kennedy and my favorite beagle. Basketball would never be the same.

I finally met Stephen myself when he was the official race starter for the Andrew Lovedale 5K on Davidson’s cross country course. Lovedale, the dominant center on the Elite 8 team, started the A2S Foundation, a non-profit agency that works hard to improve life in his hometown Nigeria. Curry is on his board and was a major drawing card that race day. I talked with Curry about how to properly start the race. It turned out to be a little comical with Curry using a starter’s pistol and wearing heavy duty ear protection. He started both a men’s and a women’s race, so we went through the drill twice. Curry thanked the crowd for coming and then fired the pistol, though I don’t think he really enjoyed shooting it.

I talked with Curry one other time at a fundraiser for A2S, just before he answered questions while wearing a boot to protect his severely injured ankle. Multiple inquiries about a possible future playing in Charlotte dominated the session.

Fast forward to September, 2012 with Curry now an established, up and coming NBA point guard. He returned to the race again, but this time to run it. Anything to get away from that pistol was my opinion. Curry surprised me with a 22 minute and 45 seconds third place age group finish on a particularly challenging course. He truly is an incredible athlete.

Fast forward again to last night, June 16, 2015, where Curry and his Warriors won the NBA championship and capped one of the best season-long records in league history by winning the Larry O’Brien Trophy. I was pulling for them to win it all.

I’m often asked, “Did you think he could be this good?” In fact, Andrew Lovedale and I talked about the same question by phone recently. Rated by NBA experts as one of the most exciting players ever and this year’s NBA MVP says a lot. To answer the question myself, I have never witnessed personally another player who can hold an entire arena spellbound with his ability and charisma. Yes, I did think he could be that good, at least if I could ever have imagined anybody being that good. I can’t wait for tonight’s game!