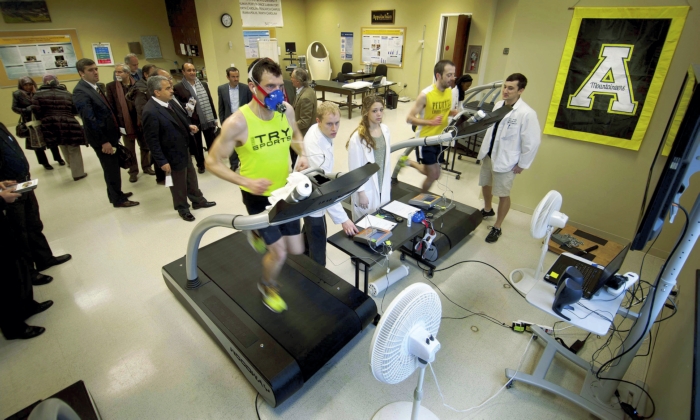 JON C. LAKEY / SALISBURY POST Glenn Carroll and Joshua Pinyan take part in a study in the Appalachian State University Human Performance Lab on the North Carolina Research Campus in Kannapolis. The two runners in March took part in a study that debunked the myth that chia seeds boost endurance.

KANNAPOLIS — An Appalachian State University professor at the North Carolina Research Campus says he has debunked a myth that dates back several centuries.

Chia seeds, native to central and south Mexico and Guatemala, have been frequently cited as a performance booster for athletes. The seeds are also known as being fuel for long-distance runners, such as Aztec messengers who lived in parts of Central America from the 14th to 16th centuries.

A recently completed study by Dr. David Nieman, director of Appalachian State’s Human Performance Laboratory at the Research Campus, found that the seeds were nutritious, but don’t provide an endurance boost for athletes.

“Runners have to be careful. There’s a lot of nonsense out there,” Nieman said. “The concept of chia Seeds has really been pushed way ahead of the science.”

Nieman’s study was published in the May edition of the journal Nutrients. The study was conducted through a funding partnership with the Dole Foods Nutrition Institute, which is also located at the North Carolina Research Campus.

In his study, Nieman tested 24 male and female runners aged 24 to 55. The runners were tested twice, at least two weeks apart. Each time, the runners reported to the lab in an overnight fasted state. At 8 a.m., they provided a blood sample. Then, runners were either given 0.5 liters of flavored water or  0.5 liters of water with chia seed oil.

The runners waited 30 minutes, ran to exhaustion at a marathon pace and provided additional blood samples.

If the chia seeds were effective as a performance enhancer, Nieman said, a compound called alpha-linolenic acid — an omega-3 fatty acid — would hit the bloodstream around the time athletes started getting tired. A runner himself, Nieman said he was hoping to confirm the benefits of chia seeds for athletic performance.

The seeds spiked levels of the omega-3 fatty acid, but had no effect on the runners’ endurance, Nieman said.

“There was absolutely no evidence that it was being used by the muscles,” he said. “The chia seed fat had no effect whatsoever.”

The myth that chia seeds have a magical effect is repeated by companies looking to market products and in books, Nieman said. One example he cited was Christopher McDougall’s “Born to Run: A Hidden Tribe, Superathletes, and the Greatest Race the World Has Never Seen.”

“Unfortunately, in America, you can say all this kind of stuff without really good scientific evidence to back it up,” he said.

He said the seeds are a nutritional food, but “they don’t magically transform your health.”

A better compound to focus on during intense exercise is carbohydrate, Nieman said. He said the best type of carbohydrates come from fruits such as dates and raisins. Bananas are close to the ideal athletic food, he said.

The most recent study is the third conducted by Nieman. The first found that chia seeds had no effect on markers for disease. The second found that an omega-3 fatty acid only occurs in milled seed.

‘Beyond a hero’: Teen saves life with CPR