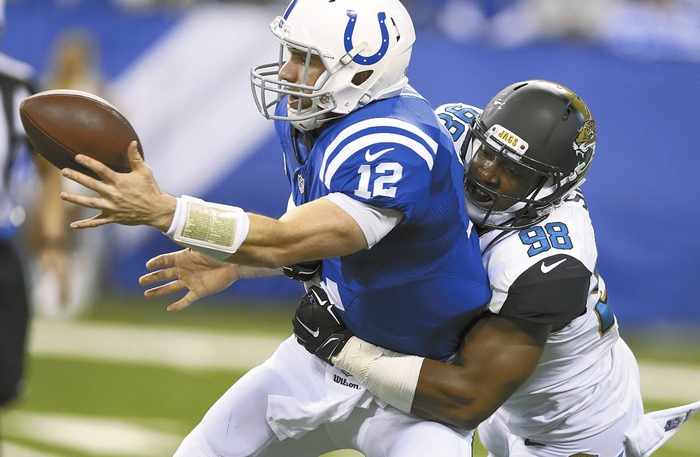 The Associated Press Jacksonville defensive end Chris Smith (98) sacks Indianapolis quarterback Andrew Luck (12) on Nov. 23, 2014, and forces a fumble on the same play. Smith, a rookie who graduated from West Rowan and went to Arkansas, had three sacks in seven games in 2014.

The Jacksonville Jaguars won’t play a preseason game until they host the Pittsburgh Steelers on Aug. 14, but second-year defensive end Chris Smith is already pouring sweat into improvement.

“It’s all coming around fast,” Smith said. “From my rookie year until now has been a blink.”
Smith is currently busy in Jacksonville with OTAs — Organized Team Activities. Smith’s 10 OTA days, which include a two-hour morning practice — began on May 26.
“We’re in Phase 3 of the offseason now,” Smith said. “We’re in the grind.”
Phase 1, as mandated by the NFL, started back in April and consisted of basic strength and conditioning workouts. Phase 2 incorporated individual football instruction from coaches. Phase 3 means progressing to organized team practices and drills — but with no live contact.
Mandatory mini-camp for the Jaguars will be held June 16-18.
Smith has a new venture in Salisbury in which he has partnered with Steven Williams, the former Catawba star and North Rowan defensive coordinator, who was Smith’s position coach when he played at West Rowan.
“1st Step Performance Training” is what they’re calling it. The location is the “Extreme Performance” facility at 1504 Kentucky Street in Salisbury.
It’s an opportunity for young athletes, particularly aspiring defensive linemen, to receive expert instruction from a knowledgeable coach and an athlete who’s played at the highest level. Williams and Smith plan to provide one-on-one instruction with the goal of improving speed, agility, explosiveness and footwork.
“It’s not just a camp,” Smith explained. “We want this to be a place where athletes — and not just football athletes — can go year-round to get better. I’m looking at it as a way to give something back to Salisbury. Hopefully, we can inspire kids. I know I’ve got a lot of tips I can share — things I wish I knew when I went from West Rowan to Arkansas and things I wish I’d known when I went from Arkansas to the NFL. The small things takes care of the big things, and we want to teach all those small things.”
Call 704-223-0836 or email williamssd82@yahoo.com for more information on 1st Step Performance Training.
•••
Smith, 23, was a fifth-round pick of the Jaguars in 2014, after posting 22 sacks at Arkansas.
“It’s a good organization with a coach (Gus Bradley) who pushes everyone,” Smith said. “Everyone is treated with respect, no matter where you went to school or what round you were drafted in.”
A pass-rush specialist off the edge, a “LEO” in modern football terminology, Smith, 6-foot-1, 266 pounds, played in seven games for the Jaguars as a rookie. He produced sacks against Indianapolis and Tennessee and he shared sacks in games with Cincinnati and Houston.
Jacksonville was 3-13 in 2014 and had the least productive offense in the NFL, but Smith wasn’t surprised the team chose Dante Fowler, a high-profile pass-rusher, with the third pick of the draft.
“It didn’t surprise me because he’s a special player and person,” Smith said. “I played against his team (Florida) in the SEC.”
Fowler won’t play at all this season after tearing an ACL in rookie mini-camp. Smith said the rookie has been amazingly upbeat about the setback.
“He’s talking about using the injury and the rehab as a chance to come back better and stronger than ever,” Smith said. “He’s one of those people who is always positive. Dante never has a bad day.”
Smith is enthusiastic about the Jaguars’ draft, especially Alabama running back T.J. Yeldon, South Carolina offensive lineman A.J. Cann and Florida State wide receiver Rashad Greene.
“We got some steals who will make an impact right away,” Smith said.
Smith expects his second season in the NFL to go smoother than a rookie year that included the inevitable ups and downs. He was released last September but then was re-signed by the Jaguars two days later for the practice squad. By October, he had worked his way back on the regular roster.
“The biggest change for my second year is now I know what to expect,” Smith said. “We’ve got a great defensive line coach (Todd Wash) and he teaches you a lot without yelling at you a lot. The plan is just to keep working my way up. My goal for 2015 is to double my sacks total to six.”
Smith also is happy some of his rookie duties are behind him.
“I didn’t mind at all, but the rookie is that guy who always has to go on the food runs,” Smith said. “And those defensive linemen love to eat.”