David Freeze: Brent and Norma making strides — and rides — on the road to wellness 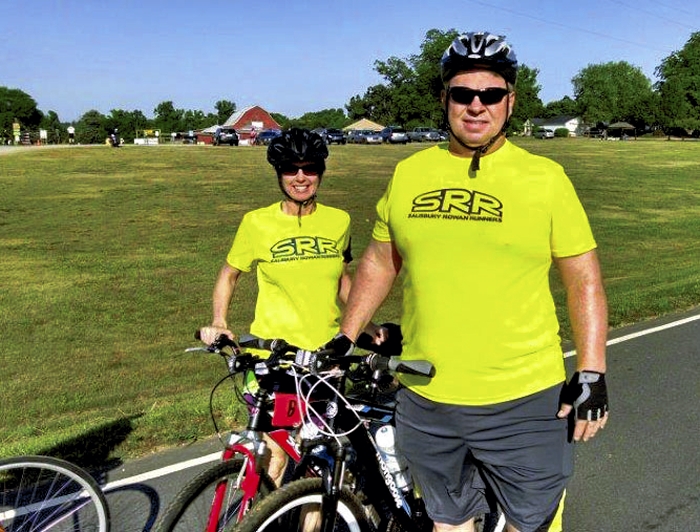 Wanda and Brent Parks as they get set to start the Great Berry Ride at Patterson Farms on Saturday. Photo by Richard Taylor.

When we last visited at the end of April, Brent Parks was still floundering at the end of this tax season and a 10-day cruise. Norma Honeycutt was making steady weight loss gains and closing the gap of pounds lost between herself and Brent.

Most weeks are scheduled such that I can meet with the famous duo early on Monday and again on Friday. My hopes are to get Brent and Norma a good start each Monday for a productive week and then to cap the results on Friday, while setting the tone for at least several workouts during the weekend.

After five months of activity, conversation and laughs (they never tell me when they curse me), several patterns have taken place. Brent likes early morning, Norma doesn’t. Norma said one morning while pedaling her stationary bike, “Ahhhhh, I wish I was still in bed.” Brent quickly followed with, “Pretend that this is your bed.” Norma likes to gather friends around her to work out and Brent is fine with going it alone, though they are now well known by many folks at the Y and the Forum. Norma will sometimes have her workout late in the evening, while Brent hopes to be done and off his feet by that time. Any of the above are fine with me.

Brent will readily tell you that he likes to eat, while Norma is a little less vocal — around me, at least. She has several fine cooks in her family. Norma began consistently raising her heart rate high enough in May to produce regular sweat for the first time. Her comment began, “Now that I have opened up these sweat glands …” and Brent says, “I sweat as soon as I walk in the building.” That has been consistent from the start.

One of the common statements that they used to make was, “I am going to feel out of place doing that!” Having worked for several years at the YMCA, I know that this is a common fear. It really never is as bad as they fear. When the exercising duo finally took a spin class with Ruthie at the Y, Brent and Norma were loaded with apprehension. They did fine and were readily accepted by those around them.

Norma liked it so much that she took a high intensity short class with Clem at the Forum, actually outworking some of those much younger around her.

In early May, Brent signed up for a beginning cycling class through Salisbury Parks and Recreation. He missed a couple of the classes, but he did get his bike going after some mechanical issues. One of the perks of the class was entry into the Great Berry Ride at Patterson Farms last Saturday. I was not sure whether Brent would actually do the ride, but I knew that his wife Wanda had begun to enjoy cycling while taking the class. Still, it came down to last Friday before they committed to join the fun.

Norma, on the other hand, is surrounded by several regular runners at Partners in Learning. The Wellness Program that she endorsed for all of her staff had regularly provided opportunities for Norma to join in a 5K or even take a class of some sort. Until January, Norma wanted little exposure to real exercise, but she did want to shed some pounds. On May 23, Norma encouraged her staff to sign up for the Bare Bones 5K to honor Partners in Learning’s assistant director and marathoner Deborah Howell in her battle against breast cancer. At the last minute, Norma backed out as she always had before, provoking more than a few strong words from her staff. My response was to give her the opportunity to do the Music Run 5K at East Rowan High School last Saturday. She signed up to do it.

Both Brent and Norma have made consistent strides forward, but the steps backward still find their way into the mix. I felt fairly confident that Brent would ride the Berry Ride and Norma would run the Music Run. My own plan was to be at both events and see exactly what happened.

Brent and Wanda took off first from Patterson Farms, planning to ride at least 20 miles. I was already at East High but I checked on them by phone. Norma lined up with other runners and walkers as members of the band sent them off to run 3.1 miles.

Brent cycled 21.3 miles in 1 hour, 52 minutes and 1 second. Wanda had a big lead on him when they made the last turn toward the finish, but Brent closed fast. He said, “I could have easily beat her. She had to pedal really hard to stay ahead of me.” Norma ran/walked the 5K course in 46 minutes and 21 seconds. She was disappointed at finishing closer to the rear than she had hoped. Sufficient comments from Deborah and me both brought her back to the proper perspective.

Those words came up again. “I felt out of place to be there,” was a statement that both used yesterday morning in conversation about their weekend events. The truth is that neither one of them could have even made it far past the starting line just five months ago. The successful completion of both events is a further building block in their fitness and wellness growth.

Already, Brent is looking for other bike rides. “This cycling thing just might be it for me. I really enjoyed it.” I sent him additional information on rides Monday evening. He is already considering a much longer ride with camping involved. Brent planned to spend Saturday afternoon resting following his successful ride, but he was amazed to find that he had energy to clean out and organize the carport and more. Friend Laurie Ward said, “Brent, you’ve turned the corner!”

Norma was not happy with her time, even though it was faster than she had done in practice. She said, “I’m competitive. I don’t want to finish that close to the back of the pack.” In the bigger picture, Norma is now encouraging her sister to get active. Norma said, “It will be a year Wednesday since my daddy died. Two things have got me through it so far. God, of course is No. 1, and exercise is No. 2.” Sounds like she has turned the corner, too.

After five months, Brent is down 29 pounds and Norma is down 25 and a lot of inches. See you at the end of June.