Across Rowan and Cabarrus, many pause to remember the fallen on Memorial Day 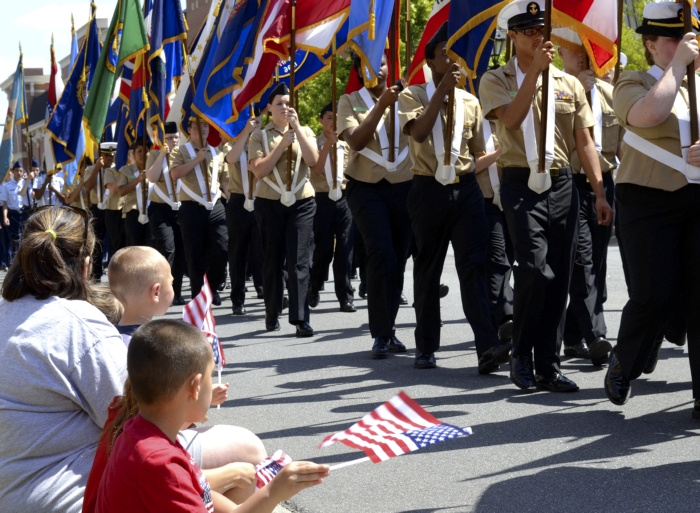 Throughout the day Monday, hundreds of Rowan and Cabarrus citizens took time to remember those who paid the supreme sacrifice for their nation.

Some paid tribute with music and ceremony, others in quiet remembrance.

In Kannapolis, the annual Memorial Day ceremony began with a parade. Bagpipes and drums played as JROTC cadets from four high schools carried the flags of all 50 states and the U.S. flag.

They were followed by veterans of the nation’s armed services – some marching, others riding, and all receiving waves of applause from an estimated 400 people gathered downtown in Veterans Park.

And then, the roar of a phalanx of Patriot Guard Riders, escorting two Freedom Ride trucks from Freightliner in Cleveland – specially painted in honor of veterans and in memory of fallen U.S. service members, prisoners of war and troops missing in action.

As the marchers approached, Kathy Hunter gave flags to each of her four grandchildren, then made sure they knew how to hold them respectfully.

“This is for the kids to learn about their country, and about Memorial Day,” Hunter said.

Her own father was an Army veteran, “many years ago,” Hunter said.

Her granddaughter Anaya Pistorio, age 7, is already learning a lot about her country’s history. At Odell Elementary, she said, “I learned how to sing ‘You’re a Grand Old Flag.’ ”

Kathy Hunter said she felt it was important for her grandchildren to understand the sacrifice made by those who serve, and those who gave their lives for freedom.

Under the oaks in Veterans Park, Kannapolis Mayor Darrell Hinnant called the audience’s attention to the 1,729 names inscribed nearby, where an eternal flame burns in honor of fallen service members from Rowan and Cabarrus counties.

Gold Star mothers and wives whose loved ones fell in the line of duty were also recognized, as were the many veterans in attendance – especially veterans of the Korean War.

“Kannapolis, we are standing in the presence of patriots,” Hinnant said. “… They were ordinary people, called to do extraordinary things in extreme times.”

Norris Dearmon, a World War II veteran and former commander of Beaver-Pittman American Legion Post 115, spoke of the sacrifices made by Korean War veterans, especially those from Kannapolis.

Altogether, 36,516 U.S. troops died in Korea, according to published sources.

Korean War veterans were recognized during the ceremony, as were U.S. veterans of all conflicts.

“Right thing to do”

A few miles away, in Landis, members of American Legion Post 146 and the Ladies Auxiliary joined members of the community at 3 p.m. to observe the National Moment of Remembrance.

Established by Congress in 2000, the Moment of Remembrance calls on Americans to pause at 3 p.m. local time for a moment of silence in honor of the approximately 1.1 million U.S. troops who have died in the nation’s wars, from the American Revolution to the present day.

It was a small, quiet gathering. Sgt. Brett Miller, of the N.C. Army National Guard, played “Taps” on the bugle, and Post Commander Timothy Nason led the Pledge of Allegiance.

This was the first time Post 146 had held a Moment of Remembrance ceremony, Nason said. The size of the crowd didn’t matter.

“No matter how many people are here, no matter what, it’s the right thing to do,” Nason said.

He said that, in the future, the American Legion post will continue to invite residents to join them on Memorial Day.

There was time during the afternoon for fellowship and reminiscing, as members and guests had lunch at the Legion Hall.

With 38 members, Nason said the post is “small, but growing,” and Memorial Day offered a chance to open their doors to Landis and the community.

Dwight McBride, former Air Force pilot and member of Post 146, said he hoped those who gathered would take away “appreciation for those who served, and some understanding of what Memorial Day is all about.”

For Sgt. Miller, playing “Taps” to honor the fallen is an emotional experience.

“About four thousand names go through my mind,” said Miller, who joined the N.C. Army National Guard after serving eight years in the U.S. Marine Corps.

In addition to his regular duties, Miller is a bugler for the state’s Military Funeral Honors teams.

Honoring those who served, and particularly those who died in the line of duty, “is so incredibly important,” Miller said. “When we forget those who gave the ultimate sacrifice, or those who came home and lived to a ripe old age, that’s when we fail as a society.”