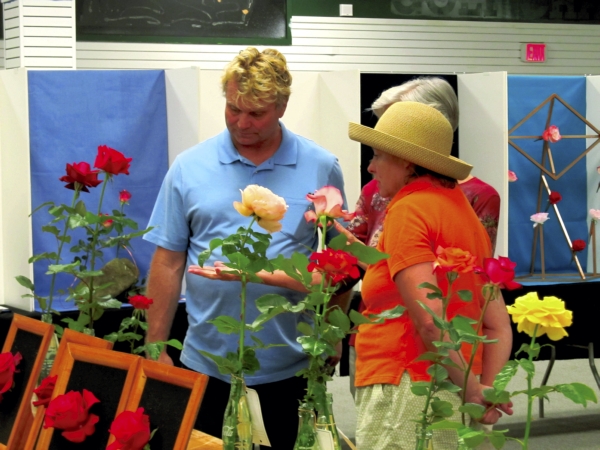 Megan Braun/for the Salisbury Post Laura and Bob Williamson at the 2015 Rose Show at the West End Plaza.

Rowan Rose Society president Sarah Hill has been growing roses for over 20 years. She won several prizes, including the royalty award for her arrangement of Gemini roses.

“It’s just fun to do,” Hill said. “It’s something that just gets in your blood.”

Robert Myers, an international judge for the rose shows, grows over 800 roses as part of his business, The Perfect Rose. He serves more than 300 customers from Winston-Salem to Columbia.

“I want to have different varieties (of roses),” he said. Myers will be traveling to France this weekend to judge another rose show. In order to become a judge, Myers went through several classes and had to pass a test on roses.

“As a judge, you look for perfection, perfect blooms and perfect leaves,” he said. Flaws on the flowers or foliage take off points.

Don Myers of Wake Forest received several honors for his entries, including overall miniature rose and overall miniflora. He has been growing roses for more than 50 years and holds a PhD. in plant pathology.

“It’s my goal to interest younger people in rose growing. It’s nice to get into the soil and do something fun,” he said.

Attendees Laura and Bob Williamson have friends that grow roses and were invited to the show again this year.

“We admire people who grow these roses,” Laura said. “We grow some roses ourselves, but we prefer not to use insecticides and other chemicals,” she added.

Fourteen-year-old John Seamon won second place for his miniature arrangement of yellow roses. He became involved along with his parents who also are rose growers.

Winners received prizes that ranged from Lowe’s gift cards to birdhouses to rose bushes, which are “new” 2016 roses that have not been put on the market yet.

The rose show continues today from 1 p.m. until 5 p.m.