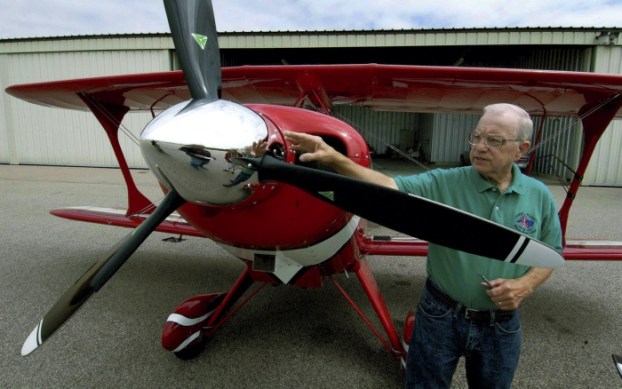 JON C. LAKEY / SALISBURY POST Rowan County pilot Larry Macon has turned his love of aviation into success in the world of aerobatics performance. He flies a 1996 Pitts Special 2B, which he keeps in pristine condition.

Larry Macon loves to compete — for bragging rights more than anything, but compete he does.

“I told my wife that it is like other guys and their golf,” Macon said as he stood beside his Pitts Special 2B aerobatic plane. “The plane is like NASCAR on wings, with a skin, tubes and a big engine. I was fortunate to find exactly the plane I wanted.”

A mechanical engineer by trade who spent 40 years at what is now Performance Fibers, Macon has already entered five competitions this year and won four of them. He competes in the intermediate division of aerobatics in the northeast region of the U.S., which includes North Carolina. Recent competitions have been in Virginia, Pennsylvania and New Jersey, with a venture into the Southeast region at Georgia. Upcoming events include New Jersey and the East Coast Aerobatic Championship at Rome, Georgia, in early June.

The United States and international aerobatic competition season runs from April through October.

A soft-spoken grandfather, Macon’s eyes light up when he talks about his rivals.

“Often, they try to get in my head before we fly. Sometimes I have to listen to a lot of bragging before we get in the air, but I save my talk till afterwards,” he said. “Especially if I win.”

Macon fondly remembered his first flight. His dad, who hoped to be a pilot but never realized the dream, was invited to fly with a friend.

“I got to go along and was so excited to see everything from up high, all the miniature houses and farms. I kept running from side to side in the back of the plane till the pilot told me that I had to sit down,” Macon said. Following that flight, his dad offered financial assistance for flight training. Later, with college drawing to a close, Macon decided that his dad’s offer might expire soon and acquired his pilot’s license.

“I probably would have ended up a fighter pilot except for my poor eyesight,” he said.

The Pitts S-2B, a high-powered, extremely maneuverable plane, is the first especially designed for aerobatics. Pitts planes have been built for 70 years.

“I don’t scrimp on anything for the plane,” Macon said. “I wipe it down after every flight. By flying within the limits of the plane, I have never had a close call. My training comes from the best people around.”

The 1996 model Pitts is pristine in appearance and is considered certified because it was factory built, something that Macon prefers. Not a single oil spot marred the floor of Macon’s hangar. He considers the Pitts to be a member of the family and affectionately refers to the plane as “the ride.”

Macon’s Pitts has a wing span of 20 feet, a length of 18 feet, and weighs less than 1,200 pounds. It can climb at a rate of over half a mile a minute and cruises at 175 miles per hour. The plane has a Lycoming 540-cubic-inch engine that provides 260 horsepower.

Prior to the Pitts, which he acquired in 2002, Macon owned a Super Decathlon. When considering that purchase, he told his wife Pat that he wanted a plane. She told him to just put that thought out of his mind, that he did not need a plane. Macon waited till she was on a beach trip with some girlfriends, bought the plane, and then called her to report the purchase while she was in front of the girls.

“It was a good move, she cooled off quite a bit before she got back home,” Macon said of his wife of 32 years. The Macon family also includes son and daughter Meredith and Darren and two grandchildren, Allison and Jason.

International Aerobatic Club competitions include a series of three flights. The first is called the “known” flight, one that the pilot has practiced beforehand. Next up is the “free” flight, one that the pilot can design while meeting specifications but using maneuvers that the plane and pilot fly better or simply look good doing. Last is the “unknown,” a flight that is planned by others and given to the pilot just 12 hours before his actual competition. No practice is allowed.

Macon keeps a sheet of the choreography for his next “known” and “free” flights on the dash of his plane.

“I have to keep in mind how the wind is going to affect my flight, specifically how it will be different on one side of a loop as opposed to the other side,” he said. “Also, it is easy to get disoriented on the flights. I have seen pilots think they have really nailed a competition, only to find out that they were flying in the wrong direction.”

A special waiver for Macon from the FAA allows him to practice in a designated box over the Rowan County Airport. Others may use the 3,400-by-7,000-foot aerobatic box only if Macon approves and the other pilot signs the waiver agreeing to the required conditions. Most of his aerobatic practice is performed between 1,500 and 4,500 feet above the ground.

Macon is also a certified flight instructor and a competition judge himself.

“Aerobatics are not for everyone, but all pilots need to experience it,” he said. Macon served as president of the International Aerobatic Club, North Carolina Chapter 19, from 2004 to 2008. He is currently the treasurer of the Cloud Cappers Flying Club incorporated in Rowan County in 1970.

After his first aerobatic flight in 1980, Macon competed for the first time in 1999 and now has over 2,600 flight hours. All of this happened after starting flight training in 1968 at the Rowan County Airport and eventually getting his private certificate later that same year.

Certainly Macon has a gift of flight and has the credentials to prove it, having bested much more famous rivals along the way. He hopes his grandson will soon join him in his love of aerobatic flying. With no plans to retire anytime soon, expect to see and hear that red and white Pitts Special often during warm weather over the airport.

No doubt, Larry Macon will be enjoying himself.

A send-off for 611: Hundreds pay visit to restored steam locomotive before its return to Virginia

By Hugh Fisher hugh.fisher@salisburypost.com SPENCER – After a year-long refit, it’s almost time for the Class J 611 locomotive to... read more