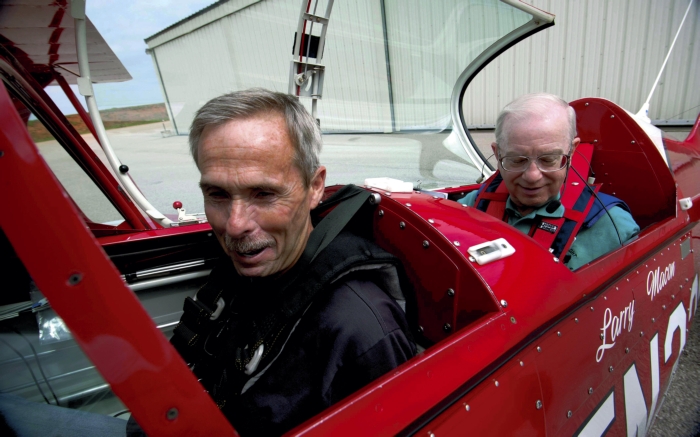 I have been interested in flight since childhood. Numerous air shows have been great fun over the years. I have always been amazed at the things that pilots can do with airplanes. Two of my favorites at air shows are the military aircraft and the aerobatic planes.

Just in the last three years, I have been fortunate enough to take a two-hour flight on a World War II-era B-17 bomber named the Memphis Belle. Then I went skydiving early last winter. I wouldn’t take anything for either experience.

On Thursday, May 14, I got to have another adventure, one that I will cherish forever. Last fall, I met Larry Macon at the Rowan County Airport. We talked just briefly in airport manager Thad Howell’s office. After he left, Thad told me that Larry was a fantastic pilot who competes in aerobatic competitions and is accustomed to winning them. I decided right away that this would be a good story for the Post, especially for those readers who often wondered who is that guy doing all those flips and rolls with that fancy plane over the airport.

I talked with Larry about doing a story, and he was all for it. We first met in the fall with the weather getting colder, and eventually fall turned to winter. My story idea was delayed until spring because, Larry said, “My plane doesn’t have a heater, and I don’t fly often in the cold.”

A few weeks ago, I heard from Larry that he was back in the air, and we settled on Thursday for the day to meet at his hangar to talk about the plane and his background.

“What kind of interview will be best?” Larry asked. “Would you like to fly with me?”

Immediately, the whole interview took on a different perspective. I love planes, and have always jumped at a chance to fly in anything. But I had seen Larry fly that Pitts Special, and right away it seemed that I might just be in over my head on this adventure. I have never been good at any of the rides at the fair, particularly the ones that swing me around really fast. It seems I might get dizzy quicker than most people, but that statement does leave a lot of room for follow-up comments. Regardless, I was ready to give it a try although remaining apprehensive of whether I could do it.

On Thursday morning, Post photographer Jon Lakey and I met Larry at his hangar. There sat his beautiful airplane that looks so agile and fast, with a cockpit that wouldn’t fit a big guy. Larry had told me earlier that we would just about wear the airplane.

Just like the skydiving event, I signed a document with initials about 13 times and a signature that I waived all rights should we not make it back. Larry showed me how to put the parachute on and the procedure for opening the cockpit before bailing out of the plane should the need arise. There were enough steps that I hoped to remember them all if anything happened.

Finally, with Jon on board Jack Neubacher’s plane for photography purposes, we took off. The first plan was for Jack and Jon to get out ahead of us and be ready for a fly-by and photo opportunities. We caught up too fast and had to make a quick turn to come back around behind the other plane, then we did it again. Along the way, we hit three Gs (explained in the accompanying story), and I did OK. Just OK. I started to sweat. Larry told me to open the air vents, then turned us on the side toward the other plane and I loved that, even waving a few times. I was thinking, “So far, so good!” On the way back to the airport, Larry told me that he was going to roll the plane. One very quick loop and we were upside down and back up before I knew it. I’m still good. Mostly.

We landed and talked with Jon and Jack about the photos. Jon said he had what he needed from the air. Larry took us back up and this time he ramped it up a little bit. Our takeoff was much quicker and steeper this time. Still good. We flew by Jon, now on the ground, and then Larry said, “I am going to do another roll and hold it inverted a little longer (or something to that effect).” Next thing, I am hanging upside down by my shoulder straps, and after rolling out of that, I didn’t feel so good. Larry knew it right away and we flattened out. As he had said often, “Are you OK?” For the first time, I answered, “I am getting the bag (the barf bag).” I will admit to using it briefly, but only losing water. The reason for that is that I had eaten nothing that morning. Good thing, although Larry told me that sometimes it is better to eat a little something non-greasy before flying.

Back at the hangar, Jon, Larry and I talked for an hour as I did the interview. What I discovered is that Rowan County has a real treasure in this fantastic pilot! Thad had told me earlier, “You couldn’t be in better hands!” I totally agree. What an amazing man! Not only because he can fly a plane with extraordinary skill, but that he is so careful and safety-conscious as he does it, especially with a novice like me. He made sure I was comfortable (as could be) throughout, always explaining what he was about to do.

When you drive by the airport and have some time, stop by and watch Larry practicing for his next competition. Inside this quiet and humble man lies the heart of a competitor. As for me, I wouldn’t bet on anybody else.