Catawba baseball: One down as Indians top Wilmington 3-2 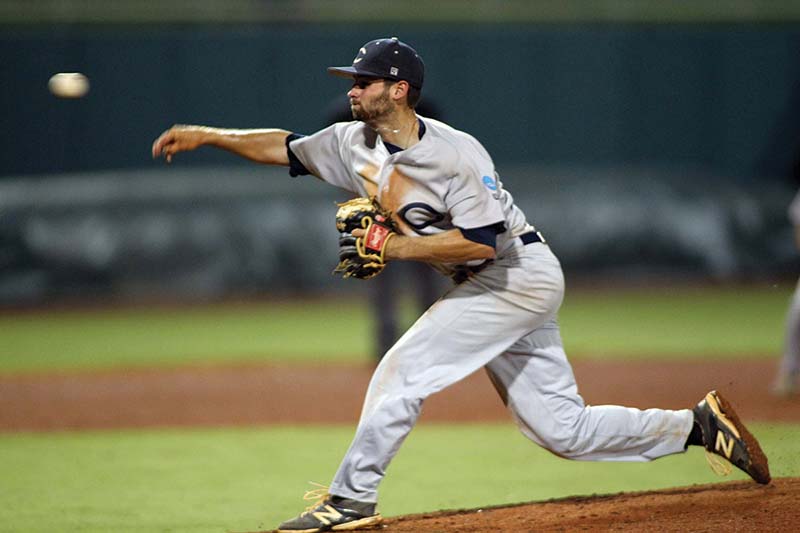 PHoto By Willis Glasgow / For The Salisbury Post Catawba pitcher Craig Brooks (22) delivers a pitch in the eighth inning against Wilmington (Del.) on Saturday in the teams’ first game at the Division II National Championship. Brooks pitched two innings in relief, striking out two of the three batters he faced in the ninth to secure the Indians’ 3-2 victory. Catawba plays Henderson State (Ark.) at 7 p.m. Monday.

CARY — Craig Brooks ended Catawba’s 3-2 victory against Wilmington, Del., in the opening round of the Division II National Championships with his 150th strikeout of the season.

“Hearing the crowd on that last 2-2 pitch, I got chills,” Brooks said. “I got pumped up. I felt like I could’ve bench pressed the world.”

It was six up and six down for Brooks in the eighth and ninth, as he earned his second save of the season. He got his 148th strikeout of the season in the eighth to break a Catawba record that was established by Brian Boltz in 1988.

“I was our closer in these championships when I was a freshman, so it brought back some memories,” Brooks said. “What was different tonight is that I have a lot more experience now.”

Catawba starter and winner Shaefer Shepard (11-3) was outstanding for five innings, allowing only a solo homer in the second to cleanup man Sam Goines.

“I threw him a 2-0 fastball down the middle, and he’s their best hitter,” Shepard said. “But other than that, it was a good outing. I got a lot of outs with my two-seam fastball.”

Shepard prevailed in a tough pitchimg matchup with Wilmington ace Jamie Treml, a lefty who hadn’t lost a decision before Saturday’s setback since 2011.

“Their pitcher was really good,” Catawba coach Jim Gantt said. “We were behind his fastball and we were ahead of his changeup. We got a lot of guys on base, but we couldn’t get them in.”

Shepard exited after issuing back-to-back walks to open the sixth, but the Indians’ deep bullpen took it from there and held the lead. Ryan McClintock and Michael Elwell got the Indians through a tense sixth, still leading 3-2.

“I wasn’t tired, but the walks got me to start the sixth,” Shepard said. “Our bullpen did a super job, especially the fireballer at the end.”

Bryan Blanton pitched the seventh and stranded two Wildcats. Then it was time for Brooks, who leads Division II in strikeouts, to reprise the closer role he handled so well for the Indians in 2012.

Luke Setzer doubled down the left-field line and Brooks, who started the game at third, doubled to the left-center gap in Catawba’s two-run first inning.

“That was big to get off to a fast start and score runs with two outs in the first,” Brooks said.

Catawba squandered opportunities early, stranding Richardson at third base after his triple in the third and leaving the bases full in the fourth.

Richardson, playing with a jammed left wrist, anchored Catawba’s defense at shortstop. Kyle Smith produced a sac fly in the fourth that gave the Indians a 3-1 lead.

Catawba returns to action Monday at 7 p.m. against Henderson State. Brooks likely will be in the closer role again.