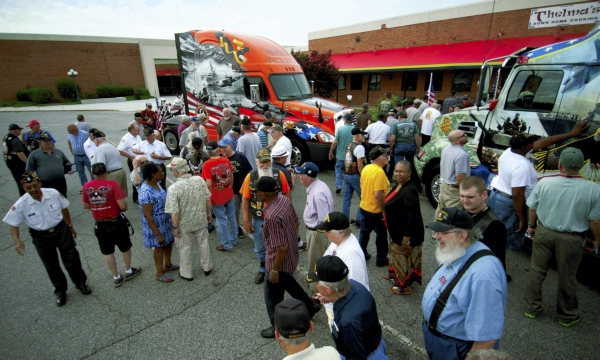 JON C. LAKEY / SALISBURY POST Thelma's Restaurant was the first stop for the two newly decorated Ride of Pride trucks in Rowan County. For 13 years, the Daimler Trucks North American Cleveland plant has been building and decorating trucks in support of veterans, all branches of the military, Veteran POWs and MIAs. A Freightliner Cascadia and a Western Star truck were escorted by the Patriot Guard of NC to West End Plaza on Tuesday morning for the gathered veterans to view.

Thelma Luckey got two special visitors on Tuesday morning at her restaurant. The weekly Tuesday meeting of military veterans was gathering steam when two Freightliner “Ride of Pride” trucks parked in front of the entrance. She said, “I was supposed to be surprised that they were coming, but I got tipped off yesterday to expect them.”

Ed Keeter, retired from Freightliner after 39 years and himself a Vietnam veteran, arranged for the trucks to be at Thelma’s for the first stop of the day while the veterans were arriving. Keeter said, “The Ride of Pride will head toward Washington, D.C. for Memorial Day. It is a protest ride of sorts, asking for accountability for all missing soldiers and prisoners of war. We hope to have 500,000 motorcycles and seven previous Ride of Pride trucks to join us on the way.”

Freightliner joined with the Ride of Pride movement in 2001. Freightliner employees sign their names on the inner walls of the trucks before the upholstery goes in.

The Patriot Honor Guard escorts the truck to various events and will also ride to Washington. Keith Arbuckle, an early member of now more than 300,000 members of the Honor Guard, said, “It’s the least that any of us can do. These veterans write a blank check to our country when they sign on, up to and including death. Patriotism is alive in a big way.” Arbuckle and other Patriot Guard members planned to accompany the trucks to the American Red Cross and a Veteran Administration Memorial later on Tuesday.

Luckey is proud to have the veterans gather in her restaurant weekly. She said, “I had this large bar that is separated from the dining area. I thought right away that it would make an ideal coffee shop and meeting place for the veterans. We have over 100 here today, male and female.”

A veteran of Desert Storm and Desert Shield, Luckey served in the Army Reserve from 1973-1994. Luckey added, “The Freightliner trucks kick off a very special Memorial Day week. It is an excellent day with a different outlook. Those trucks being here today is about veterans helping veterans, something that we say often here. We had lots of sausage biscuits and doughnuts and a great time.”

Luckey plans to continue encouraging the veterans to join her. She said, “Everybody is welcome. We meet each Tuesday morning from 9-11 a.m. with free coffee and doughnuts. We get four to six new veterans each week. Some won’t miss our meetings. I have a Book of Honor with names and pictures. I leave a veterans’ tree up all the time. It is more like a hope and memorial tree. We want to put picture ornaments on it and I am asking for more.”

World War ll veteran Tom Harrell is glad for the gathering place for veterans. Harrell arranged to have all the veterans on hand pose for a series of pictures in front of the trucks. He said, “We just enjoy the camaraderie of having served. There is a whole cross section of veterans. We have 450 who have signed the register here at Thelma’s. I always look to see where they are from. ”

Harrell served in the Air Force in China, Burma and India. He estimates that there are about 12,000 to 13,000 veterans in Rowan County. Harrell continued, “We are all citizens who are finding our way in the world. Meeting together is a form of therapy. There are many great stories among these veterans here today.”

Keeter added, “After the Ride for Pride, one truck is already promised to Schneider National Inc. It will eventually go to a military veteran who now drives for them. Schneider does a lot to support us and this is the seventh Ride of Pride truck that they have received. The other truck will be used for additional veterans’ events later on. Both trucks will be at the Charlotte races this weekend.”

One veteran on hand for the truck display is also a regular volunteer at Thelma’s during the veteran meetings. Luckey called Jerry Sliker her “right hand man” when it comes to the veterans. Sliker makes sure to keep the pastries and coffee in order during the meetings. Then he cleans up afterwards. Sliker served 20 years in the Navy and appreciates the veterans. He said, “All these guys who served, World War ll and beyond, protected our country. Here they are today, just sitting around and being themselves.”

Keeter agreed. He said, “When I came home from Vietnam, I was asked to not mention that I was a veteran. Now these trucks outside will be supporting veterans. These trucks and prayers are part of our healing.”

Fundraiser for retired Lexington officer who is wheelchair bound

By Shavonne Walker shavonne.walker@salisburypost.com Most days at the Perfect Smoke Cigar Lounge jokes fly as casually as the smoke wafts... read more