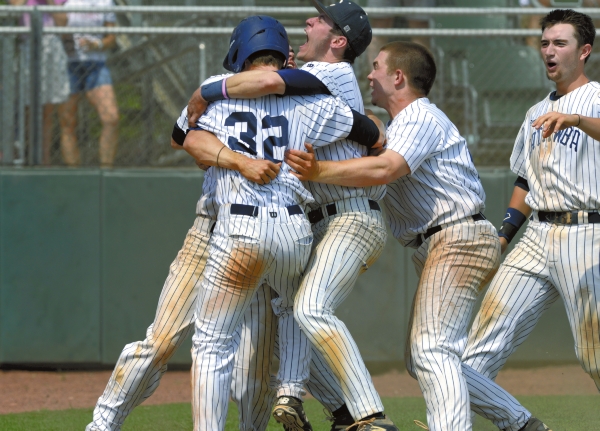 Catawba College's players celebrate by grabbing Emmitt Carden #32 after he scored the winning run in the bottom of the 9th inning. photo by Wayne Hinshaw, for the Salisbury Post

THOMASVILLE — Emmitt Carden isn’t one of the household names on Catawba’s 37-man baseball roster, but it took everyone they had and everything they had to win the NCAA II Southeast Regional.

Carden’s trip around the bases as a pinch-runner in the bottom of the ninth inning on Sunday at Finch Field will be remembered because his run on a wild pitch provided a 1-0 victory against North Georgia (38-17).

Catawba (44-13) did not get a hit in the fifth, sixth, seventh or eighth innings, as North Georgia pitcher Dylan Peppers, working on two days rest and a lot of courage, kept the Indians at bay.

“He threw a lot of curveballs for strikes and it had a sharp break,” Catawba right fielder Luke Setzer said. “When you looked for the curve, he located a fastball.”

“Carden is one of the fastest guys on the team,” said Catawba’s Will Albertson, the regional’s Most Outstanding Player. “And he’s not only fast, he’s a smart base runner.”

Albertson, walk-off home run hero on Saturday, batted next and his appearance in the batter’s box prompted a mound meeting. Peppers had handled Albertson  —  0-for-3 — but North Georgia coach Tom Cantrell wanted Albertson to see someone different.  In from the bullpen trotted lefty Taylor Keinat.

Keinat got ahead 0-and-2. Then Albertson fouled off two pitches. Then he took a ball just outside. Keinat’s 1-2 pitch was a tough one, a slider away, but Albertson lashed a liner toward right fielder Bo Edwards. It appeared the ball might be caught, but Carden, who froze briefly, correctly read that it would fall safely. He was around second base in a blink and sprinting for third. He made it easily, and North Georgia was in trouble.

“I’d had some rough at-bats and wanted to make up for it, but you still can’t try to do too much,” Albertson said. “I took what they gave me. I went with the pitch.”

The hit was the 107th of the season for Albertson. It gave him another school record. Craige Lyerly had 106 in 2009.

“That at-bat told you a lot about Albertson,” Gantt said. “He hit a walk-off on Saturday, but he’s still going up there with a team approach. He isn’t some guy having a fluke year. He stayed on a breaking ball in a tough situation. He’s just a great hitter.”

Cleanup man T.J. Wharton was walked intentionally to fill the bases. Dylan Richardson was up next. Keinat needed a strikeout or a groundball, but his first pitch to Richardson bounced to the screen, and Carden breezed home from third.

“I’d been thinking about exactly that situation, being ready if there was a wild pitch or passed ball,” Carden said. “That’s what happened, and I read it right away. We’ve all got a role.”

Catawba won the double-elimination regional without a loss, but three of its four victories were decided by one run.  Ranked 12th nationally, Catawba will play in the D-II World Series on Saturday at 7 p.m. at the USA Baseball National Training Complex in Cary.

Catawba’s only other World Series appearance was in 2012 and the Indians went 2-2, losing out to eventual national champion West Chester.

Just as Catawba got a monumental long relief effort from Russ Weiker on Saturday, it got more mound magic in Sunday’s game from left-hander Sean Grant. Making only his third start of the season, Grant shut out North Georgia for seven innings. He had a 1-2-3 first and rolled from there. He struck out six and allowed two hits.

“I didn’t know I was pitching until I got to the ballpark,” Grant said. “They told me I was getting the ball and I was excited about getting a chance. Everything clicked. My catcher (Wharton) called a great game, and I just threw the ball where he set up.”

Grant was in trouble only in the third inning, and Richardson, Catawba’s shortstop, made a play for him. With two on and one out, Richardson stabbed a hot grounder up the middle and turned it into a 6-4-3 double play.

“Sean had control of all three pitches (fastball, slider, changeup),” Wharton said. “The key was his being able to come inside with the fastball. He was jamming them, getting easy outs.”

Catawba had one chance to score in the first eight innings but encountered bad luck. Richardson was at first and would have scored when Craig Brooks sent a drive whistling to the bank in left field. But the ball bounded high over the fence for a ground-rule double, and Richardson had to return to third base. He was stranded there.

Avery Bowles relieved Grant to start the eighth frame. With one out, North Georgia catcher Sam Tidaback got a hit down the line, but right fielder Luke Setzer went into the bullpen to retrieve the ball and fired a strike to Richardson covering second base. He tagged out Tidaback for a momentum-swinger.

“The important thing was to make sure I fielded the ball before I tried to throw it,” Setzer said. “That’s a throw we work on in practice.  I had confidence in my arm to make it.”

Ryan McClintock  got the last out in the eighth. Brooks snagged a liner to third base with a runner moving and turned it into a double play to end the North Georgia ninth inning. Then Catawba finally broke through in the bottom of the frame.

“Grant was the key,” Gantt said. “He was focused and he competed. We won the regional with Craig Brooks pitching only four innings, and that’s probably the most amazing thing about this.”