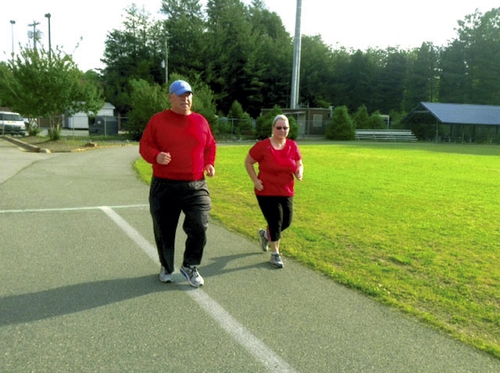 Brent Parks and Norma Honeycutt run on the JF Hurley YMCA track. Photo by David Freeze, for the Salisbury Post.

Freeze column: Brent and Norma are finding their second wind

When last I reported on Brent Parks and Norma Honeycutt, they had finished a good March and both had met their goals of losing at least 20 pounds during the first three months of 2015. Brent was headed to April and a final push to complete his CPA firm’s tax season and then a cruise to celebrate. Norma reached her weight loss goal on the last date possible in March, and she had some traveling coming mid-April as well.

Now fast forward to the end of the month and my report for April. It was a less exciting month for workouts and the frequency and intensity were down slightly. I expected that it would be less of a productive month than the first three months had been, and it turned out just that way.

We did have some good results. Tammy Swicegood, Hurley YMCA personal trainer, did a “tale of the tape” and gave the following report. So far, Brent has lost 25 pounds, 2.8 percent body fat and 9.75 inches. Norma has lost 24 pounds, down 3.2 percent body fat, and 12 inches overall. Body fat was measured by pinch calibration using seven areas. Arms, chest, waist, hips and thighs contributed to the positive numbers.

With better results during the first three months of their wellness program, both Norma and Brent are aware that I see their results as much less positive in April. Though still losing weight, the pace decreased during April. Now, as we head into May, there is a very clear guideline for both to get back into daily workouts. Not just any workouts, but productive ones that require some heavy breathing and a decent sweat and significant calorie burning.

We talked about the intensity of workouts and what it means to keep pushing. When both Brent and Norma first started with their wellness journey, I had them do simple things like walking fast and riding a stationary bike at an easy pace. They could do both but were not comfortable with the effort required. Now, the same effort is not enough to continue their desired progress.

A telltale effort came just this morning. We used the track behind the Hurley YMCA for an interval workout. The track at the Y is about 1/6th of a mile, not 1/4th mile like the standard track. It is asphalt and not cushioned as many of the newer tracks are now. I asked Brent and Norma to warm up on the first lap, then start jogging and fast walking on the second lap. Back to a steady walk on the next lap, before pushing the pace again the next. We kept this up till both had covered 3.1 miles, the standard distance of a 5K. On this totally flat surface with no traffic issues, Brent was able to cover the 3.1 miles in 45 minutes and 58 seconds. Norma followed in 48 minutes and 28 seconds.

Thinking back to when I first mentioned walking 3.1 miles, both Brent and Norma were apprehensive and certainly couldn’t have done it. One of Brent’s longterm goals has been specifically to be able to run with his wife, Wanda. We are on the way. Their average paces over the distance were 14:50 per mile for Brent and 15:37 for Norma.

Brent and Wanda are participating in the Parks and Recreation Beginning Cycling Class. He has goals for May of working out nearly every day, and including swimming, circuit training and various classes into the plan. Brent said, “Bring it on, the harder the better. I am ready to get back to it! It was exciting and I looked forward to working out each day. I want to move to the next level.” Brent wanted to establish a base line on his running/walking time for the 5K. We did that this morning, and now we will use that base line for motivation to improve. The biggest goal of all is that Brent wants to lose another 15 pounds by June 15. That is possible with a strong commitment to proper caloric intake combined with increasing exercise.

While Norma has yet to set a specific weight loss goal for the rest of May, she said, “I want to continue to walk/run nearly every day and improve my time and distance. I want to continue the circuit training, adding additional things like squats and more stairs … calorie burning stuff. I will use more spin classes.”

On Monday, we will start a new class at the Forum. Manager Rayna Gardner invited the dynamic duo to attend Metabolic Effect, a new class designed to transform your hormonal metabolism for sustained fat burning in 30 minutes flat. She calls it a “rest based fitness program.”

The journey continues, results are positive, and I am having a great time working with two wonderful people while learning much more about them. We will be back with our next report around the first of June. Say hi to Brent and Norma when you see them around.