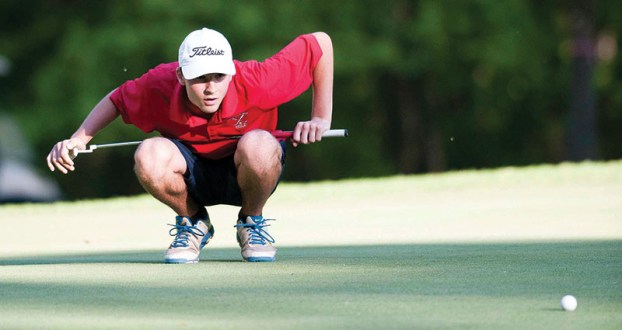 CHINA GROVE — The East Rowan golf team is clearly primed for a serious run in the 3A regional and, maybe, state tournaments.

“It is always nice to win the individual title,” Lyerly said. “But the team title in this event is more important. It was a great day for the Mustangs.”

Lyerly, a sophomore, matched South Rowan’s senior Davis Richards stroke for stroke in the 18-hole match as each fired a 4-under 67. Then on the first playoff hole (the par-four 18th), Lyerly posted a par and won medalist honors when Richards missed on a 12-foot par putt.

“I just tried to hit the fairway, hit the green and give myself a chance to make a birdie,” Lyerly said of the extra hole. “I two putted for par, and I was very surprised Davis didn’t make that putt. I was really expecting to go back and play 18 again.”

Lyerly was 4-under after eight holes and made it stand up, but Richards, an N.C. State golf commit, rallied to tie him with a birdie on his 14th hole (the par-five first). Both birdied the next-to-last hole to go 4-under. Richards, playing one group behind Lyerly, actually had a 30-foot putt to win the tournament on his final hole, but slid it just past.

While Lyerly was battling Richards for top honors, his Mustang teammates were almost as impressive in helping assure the team title for East Rowan. Logan Shuping posted a 75, freshman Bryson Sprinkle scored 76 and Ben Rollins had a 77. Their 295 beat their previous season low by 13 shots.

“That is a great score,” East Rowan coach Rhett Teems said. “Really awesome. This is a team game and a team effort. When all is said and done, we ride the bus here together and we all go home together.”

Both Teems and Lyerly feel the team is positioned to make a strong run in the Midwest 3A regionals next week at The Golf Club at Irish Creek in Kannapolis. A top-three finish there puts East Rowan in the 3A state tournament the following week in Pinehurst.

“This definitely gives us confidence going into the regionals,” Lyerly said.

Tuesday’s county title is just the latest in a string of impressive performances this season by the Mustangs. East won the South Piedmont Conference regular-season championship then won the league tournament title by a wide margin over South Rowan and Concord. Their head-to-head record in all matches this season is a near-perfect 79-1.

The top 10 individual golfers in the tournament earned All-County honors for the season.

From staff reports West Rowan won an outright conference championship in baseball for the first time since 2004 by beating... read more