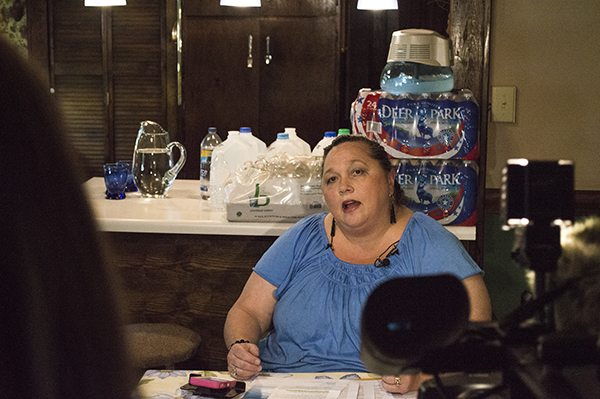 Deborah Graham, a resident of the Dukeville community, speaks during a press conference on Tuesday inside of her home. Graham received a letter on Saturday warning her not to drink her water.

DUKEVILLE — Two months after tests were conducted on private residential wells near Buck Steam Station, state officials advised some families living near three coal ash ponds in Rowan County to refrain from drinking or cooking with their water.

On April 16, the North Carolina Department of Environment and Natural Resources sent letters containing results of tests conducted in February to about 20 Rowan County residents near Duke Energy’s coal ash ponds. A portion of the letters stated nearby wells exceeded health recommendations for heavy metals and various chemicals. On Tuesday, the state agency publicly announced the letters were sent to the Rowan County residences. After receiving her letter, Dukeville resident Deborah Graham said her quality of life immediately changed. She’s lived in the same house for 27 years.

Speaking during a news conference in her dining room, Graham was flanked by a stack of water bottles and several gallon jugs. Graham said she hadn’t previously been concerned about the quality of her well water. She continued drinking water from her residential well following the February tests — a product of the 2014 Coal Ash Management Act — but immediately stopped after receiving the state agency’s letter.

“When you get a letter that says don’t drink or use the water for cooking, yeah I guess you do get pretty scared,” Graham said Tuesday. “It’s already altered our lifestyle and it’s not been but four days.”

More than the letter, Graham said she was troubled by Duke energy’s repeated claims that the water was safe for consumption.

“Duke Power has assured me that there was nothing wrong with my water,” she said.

The Rowan County Health Department likewise advised the residents near coal ash ponds not to drink their well water.

A letter to Graham from Duke dated Feb. 12 stated “based on our on-site monitoring program and independent lab testing to date, results show no indication that ash basins have influenced neighbors’ well water.”

Graham was joined by attorneys Mona Lisa Wallace and Bill Graham, who are representing residents that live near Buck Steam Station. The pair would only say they plan to evaluate the test results and address any concerns from clients.

Representatives from the Southern Environmental Law Center and the Yadkin Riverkeeper were also present at Tuesday’s news conference. Law center Senior Attorney John Suttles said the test results only confirm what environmentalists have been saying for months. The Southern Environmental Law Center is representing the Yadkin Riverkeeper in a Federal Clean Water Act lawsuit against Duke Energy. The law center is also involved in a case against Duke in state courts. Both cases are still pending.

“It flows freely through groundwater and almost everybody in this area who’s been tested has vanadium levels above health protection standards,” Suttles said. “Duke is saying they have no evidence it’s coming from right next door. That’s ridiculous. It’s just absurd.”

In an emailed statement, Duke Energy responded to the letters by continuing their claim that coal ash ponds adjacent to the former Buck Steam Station hadn’t affected the quality of drinking water.

“Our goal is to make sure neighbors have the information they need to better understand test results and to support them if they wish to pursue any next steps,” Duke said in the statement. “This could include providing alternate water temporarily to give them peace of mind until the additional groundwater studies are complete in a few months. Importantly, the state’s health evaluations note these neighbors’ wells still meet the criteria for the federal Safe Drinking Water Act that regulates public drinking water sources.”

After sending out the letters, the Department of Environment and Natural Resources in a news release said, similar to Duke, the results of the tests could be unrelated to coal ash ponds. Graham’s letter says another test will be conducted on her well in one month for other toxic chemicals.

A rezoning request that would allow a hotly contested drive-thru restaurant to be built was withdrawn before City Council could... read more