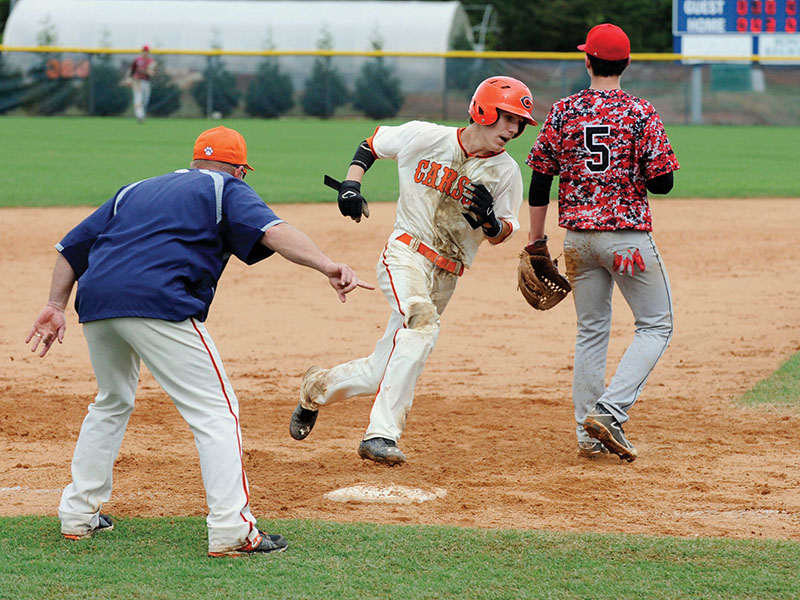 CHINA GROVE — If nothing else, Carson’s baseball team is guilty of not being able to tell time.

The Cougars — winners of six straight games after topping South Rowan 4-1 on Saturday — were supposed to be next year’s team, but they suddenly find themselves looking like contenders in the muddled South Piedmont Conference picture.

“We’re playing them one game at a time,” coach Chris Cauble said after Carson (12-6, 7-4 SPC) moved into a tie for second place. “If we take care of ‘we’ and take care of each game, everything will work its way out.”

It was another brand-name victory for Carson, edging a South Rowan squad that has dropped four straight conference decisions and tumbled from the league lead.

“This isn’t a surprise,” said winning pitcher Owen White. “Our team has grown up real fast. Now we control our own destiny.”

White (5-0), the freshman phenom who took a 1.03 ERA to the mound, spent five innings working his way into and out of trouble. South Rowan (11-6, 7-5 SPC) left five baserunners in scoring position, including two in the top of the first, but came up empty when White fanned Blake Johnson with a gorgeous 2-2 curveball that swept across the outside corner.

“When they had two men on, that’s when my nerves started getting to me,” said White. “I had to settle myself down and fight through it. That 2-and-2 was a nice pitch. I had him out on his front foot, swinging and missing.”

South’s Burke Fulcher was equally impressive until Carson scored three times in the last of the third — all with two outs. Junior outfielder Michael Morrison opened the scoring when he paddled a slow ground-ball single into center field that scored teammate Ben Shoaf.

“When I first made contact I thought I hit it hard,” Morrison said. “But the grass kind of killed it and I was lucky to get it out there. With two outs I was just trying to put it in play and hope something happens.”

Something else did. The Cougars scored two unearned runs before the inning was over, one on a throwing error and another on White’s soft-serve single into left field.

“We had opportunities to get out of the inning and get off the field,” said South coach Thad Chrismon. “But we didn’t.”

South Rowan plated its run in the top of the fifth. Tyler Rary coaxed a leadoff walk after falling behind 0-and-2 and moved to second base on an errant pickoff throw. He reached third on Ryan Ashworth’s flyout and scored when Eric Stowe smoked a two-out single into center. Carson responded in the last of the fifth when Brycen Holshouser legged out an infield hit and senior Heath Mitchem — a .543 hitter through 17 games — belted a run-scoring double to deep center field.

White struck out five and walked two before yielding to Mitchem, who pitched a scoreless sixth and seventh. Fulcher went six innings and surrendered two earned runs, fanning one and walking one.

“This makes our next game a must-game,” said Chrismon. “It’s still baseball. You’ve got to get hits and steal bases and play the game.”

Carson, meanwhile, views the rest of the season as an unfinished painting.

“I’ve never been part of a Carson team that had this kind of chemistry,” Mitchem said. “We’re not really next year’s team. We don’t want to wait. Right now can be our time.”